The Peerless Prognosticator is ON THE AIR!!! -- Round Robin Game 2: Capitals vs. Flyers 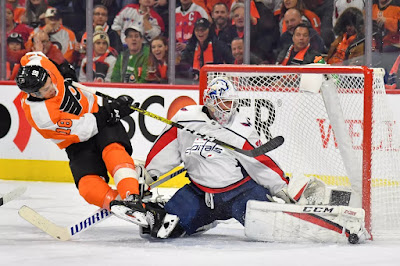 August 6th is not a particularly exciting date on the historical calendar of the Washington Capitals.  It is the birthday of former Caps defenseman Christian Djoos (1994); it is the anniversary of the signing of free agent forward Grant Martin in 1985, who played in 20 regular season and one playoff game for the Caps over two seasons; and it is the anniversary of the 2018 naming of Brett Leonhardt, Reid Cashman, and Scott Arniel as assistant coaches for the club.  It will now be remembered as the first time in 253 regular season and playoff games that the Caps faced the Philadelphia Flyers in a game played in August.

The Caps and Flyers opened their respective round robin phases of the postseason with the Caps dropping a Gimmick decision to the Tampa Bay Lightning, 3-2, and the Flyers besting the Boston Bruins, 4-1.  But now, let us take a look at…

How we got here:

The Caps scored early on a goal by Brendan Leipsic in the first period, and the Flyers scored late on a power play goal by Claude Giroux to tie the game and force extra time.  After a scoreless overtime, Evgeny Kuznetsov recorded the only goal in the freestyle competition to give the Caps a 2-1 win.  This was one of only 20 games in the league all season in which both teams recorded more than 30 shots (the Caps had 36 to the Flyers’ 31) and in which each team posted one or fewer goals.

Three lead changes was the feature of this game.  The Flyers opened the scoring in Philadelphia on a Travis Konecny goal less than four minutes into the game.  The Caps came back on goals 5:23 apart by Nicklas Backstrom and Jakub Vrana to take a 2-1 lead.  Robert Hagg tied the game with 42 seconds left in the first period to close a wild opening frame.  Kevin Hayes scored what proved to be the game-winning goal with 2:01 left in the second period, a shorthanded goal on a Caps power play that would end up going 0-for-5 for the game.

Compared to the game played a month earlier, this game started quietly enough, the teams exchanging goals (Sean Couturier for the Flyers, T.J. Oshie for the Caps) to go to the first intermission tied, 1-1.  Then, things took a turn.  The Flyers scored six straight goals over the second and third periods to open up a 7-1 lead and end the competitive portion of the contest.  Evgeny Kuznetsov closed the scoring mid-way through the period for the Caps in a 7-2 loss.

The Caps opened the scoring in the last meeting of the regular season between the two teams, but once more they fell victim to goals scored in a bunch.  The Flyers scored three goals in ten minutes in the second period to take a lead they would not relinquish.  Garnet Hathaway did manage to draw the Caps within a goal with a late strike less than two minutes before the second intermission, but goals by Ivan Provorov and Scott Laughlin in the third period pushed the Caps to their third straight defeat at the hands of the Flyers. 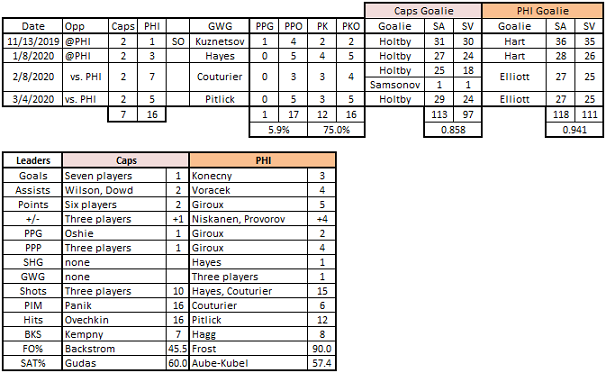 Who to watch for the Flyers…

If the Caps are going to put a pin in the party balloon that has been the Flyers’ season against the Caps and win the second game of the round robin, they will have to be far more competitive over all 60 minutes than they have been, and it would help if the stars were more than a little bit brighter when the Caps take the ice on Thursday.