The Peerless Prognosticator is ON THE AIR!!! -- Game 33: Penguins at Capitals, December 19th

The Washington Capitals return to the ice on Wednesday night to host the Pittsburgh Penguins in the latest edition of one of hockey’s most intense rivalries.  However, while the Capitals enter this contest on a hot streak as winners of five straight games and 12 of their last 14 contests, the Penguins will visit Washington fresh off a loss on Monday night to the Anaheim Ducks and are just 9-11-4 since they won four in a row to get off to a 6-1-2 start last October.

It is not often that we associate the word “struggle” with either Sidney Crosby or Evgeni Malkin, and in their case the term is relative.  But by the high standards of performance both have set over their respective careers, “struggle” is what they have done to some extent.  Going into this season, Crosby was the leader among all NHLers in points per game since he came into the league in 2005-2006 (1.29; minimum: 100 games), while Malkin was third (1.19).  However, through Monday’s games, Crosby ranked 20th in the league (1.20), while Malkin ranked 33rd (1.09).  Crosby missed three games earlier this season to an upper body injury, itself a bit disappointing since last year was the first of his career in which he appeared in every regular season game.  The injury did not slow him down that much, though.  Since his return on November 21st against Dallas, he is 7-10-17, plus-2, in 14 games.  What Crosby has not had this year so far is his usual volume of high-point volume games.  This is another category in which he leads the league over his career – games with three or more points (131, 27 more than Alex Ovechkin).  This year, however, he has four such games, and to give you some perspective on that, this is the same number of such games that Caps’ defenseman John Carlson has.  Crosby is 21-45-66, minus-1, in 47 career games against Washington.

Malkin has had two rather distinct phases to his season to date, and not in the best order.  In his first 19 games he was 7-20-27, minus-2, and had nine multi-point games.  However, since that 19-game start, he is 4-5-9, minus-12, in 14 games and has only one multi-point game along the way.  Only six skaters among 793 to dress this season have a worse plus-minus than Malkin’s minus-14.  Getting Malkin productive matters, because the Pens are just 3-7-1 in the 11 games in which he did not register a point so far this season.  He also has been having trouble scoring on the road.  After going 6-10-16, plus-2, in his first 10 games on the road this season, he goes into this game without a point in his last five games away from the Confluence and is a minus-9.  He has not had a “plus” game on the road since October 27th in Vancouver when he was plus-3 in a 5-0 win over the Canucks.  That’s ten road games, and counting.  In 42 career games against the Caps, Malkin is 19-41-60, even.

You could scratch your head until you hit gray matter and not figure out what the thinking was behind giving defenseman Jack Johnson a five-year/$16.25 million contract.  But one supposes the Penguins had their reasons.  Never a particularly effective defender in his own end, and not owning enough offense to make up for that deficiency, he has always seemed (to us, at least) a player who is thought of in better terms than his numbers would suggest.  That he is 1-7-8 in 33 games is not surprising, nor is the fact that his minus-8 is tied for worst among Penguin defensemen (Chad Ruhwedel is also minus-8…in 11 only games) and is tied for 259th among 280 defensemen to dress in the NHL this season.  Johnson has the unfortunate distinction of having the worst plus-minus of any of the 2,436 skaters to dress in the NHL since he came into the league in 2006-2007 through Monday (minus-117).  That he has only two points over his last 14 games (both assists) does not help his cause, although he is plus-2 over that span.  Johnson is 5-9-14, minus-2, in 26 career games against the Caps. 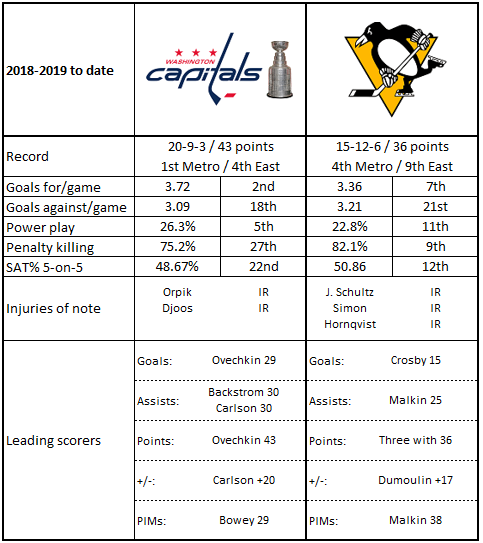 1.  What makes the Penguin’s slide even worse is how they failed to pick up points on home ice.  In their 9-11-4 skid, they are just 7-6-1 at home.  But of relevance to this game, they are just 2-5-1 on the road in that span, their seven road points fewer than all but four teams over that same span.

3.  Pittsburgh games are like old westerns – real shoot ‘em ups.  The Penguins are one of two teams to average over 32 shots on goal per game both taken and allowed.  Winnipeg is the other club.

4.  Pittsburgh is fourth in the league in road power play efficiency (28.6 percent), but they have had only 42 chances, sixth fewest in the league.

5.  Caps penalty killers, take note.  No team in the NHL has allowed more shorthanded goals than the Penguins (eight).

5.  Penalties are a strange thing for the Caps.  They can be whistled four times, but a fifth?  A sixth?  More?  The Caps are 3-3-2 when charged with five or more penalties this season, regardless of type (e.g., major, minor, misconduct, etc.).  But, they are 7-0-0 when charged with precisely four penalties.

In his first two seasons, Jake Guentzel posted 16 and 22 goals in 122 games.  He has 13 in 33 contests so far this season, putting him on a pace to finish with 32 goals.  Should he finish with that number, he would have a total of 70 goals over his first three seasons.  That would put him just one short of the top-ten goal totals over a player’s first three seasons in Penguin history, one short of the total that Mark Recchi and Greg Malone posted for the Pens over their first three seasons.  For a club with as deep and rich a history of offensive players as the Penguins, with the likes of Mario Lemieux, Jaromir Jagr, Pierre Larouche, Evgeni Malkin, and Sidney Crosby, that is no small feat.  He has hit a bit of a dry patch, though.  Since recording a hat trick in a 4-2 win over Columbus on November 24th, Guentzel has only two goals in his last 11 games.  And he is the embodiment of the idea that secondary scoring matters.  Pittsburgh is 7-1-2 in the ten games in which he has a goal this season.  The ominous part of that for the Penguins is that he has only two of his 13 goals this season on the road, none in seven games since he had one in a 4-2 loss to the Devils in New Jersey on November 13th.  Guentzel is 2-3-5, even, in seven career games against Washington.

Nobody slays Penguins in Washington like T.J. Oshie.  OK, Alex Ovechkin does, but Oshie is right there with him.  In Oshie’s four-plus seasons as a Capital, having played against the Penguins eight times at Capital One Arena, Oshie has five goals, the same number as does Ovechkin.  It is something Oshie has done over his whole career, as a matter of fact.  Of the 22 teams that Oshie has faced at least 20 times, Pittsburgh is one of two teams against which he averages at least half a goal per game, 0.50 goals per game in the case of the Penguins on 12 goals in 24 games (he has 12 goals in 17 career games against Tampa Bay).  Oshie has been dinged up this year, missing 11 games to a concussion.  Then, almost before he got his legs back under him (he has played in three games since that absence), he crashed into the net in practice and hearts slid up into the collective throats of Capitals Nation.  Oshie returned to the ice, but beware of too much ice time.  The Caps are just 2-4-2 in the eight games in which Oshie skated more than 20 minutes this season, but with three goals in the two games in barely 32 total minutes of work against the Penguins so far this season, perhaps he can make quick work of an opponent against which he does so well.   Oshie is 12-11-23, plus-11, in 24 career games against Pittsburgh.

If it wasn’t a dumpy skating penguin on the front of the jersey, and you looked at that club with a critical eye, you’d say that the Caps are a better team, and not by a small margin, even with the injuries.  Pittsburgh is not deep on defense, has had inconsistent play from its goaltenders (not to mention a lower body injury to Matt Murray that has limited him to 12 games this season), and has had consistency problems generally (they have not had as many as three consecutive wins since late October).

But so what?  The Penguins remain a gifted and dangerous club at the top of their forward lines.  Either Sidney Crosby or Evgeni Malkin can drag a team to a win on their own on any given night.  Patric Hornqvist can sometimes annoy an opponent into submission (although he is on injured reserve), and Phil Kessel just keeps plodding along on a pace to another 30 goal season (it would be his seventh).  But the Caps are now that Penguins team that always seemed to have the ability to look at an opponent and sneer, “you think you’re so good…,” upon which they would dispose of the challenger quickly and emphatically.  That’s the Caps team that needs to show up on Wednesday night.