The Peerless Prognosticator is ON THE AIR!!! -- Game 15: Sabres at Capitals, November 1st

The Washington Capitals return home on Friday night after completing one of their most successful road trips in recent memory.  The thanks for their success will be to host the Buffalo Sabres, their 9-2-2 record going into this game being one of the biggest surprises of the young season.

It might say a lot about the recent fortunes and turnover on the Buffalo Sabres roster that Jack Eichel is the team’s active leader in goals (108) and points (276), despite this being only Eichel’s fifth season in the NHL since he was taken second overall in the 2015 Entry Draft.  He is already 29th in goals scored for a team that has been playing hockey for 49 seasons, and with two more goals he will tie Dale Hawerchuk for 27th place on that list.  Give that he has increased his goal scoring marginally, but steadily since his rookie season, he could find himself in the top-20 in team history by season’s end (Maxim Afinogenov is 20th with 134 goals).  The same pattern plays out in points for Eichel, who with 24 more points this season would become the 27th player in team history to record at least 300 points and only the sixth to reach that mark before his 24th birthday in team history (Eichel will turn 24 next October).  Unsurprisingly, Eichel leads the team so far this season in goals (seven), assists (ten), and points (17).  He has three games already this season with three or more points, tied for third-most in the league (with John Carlson) behind only Edmonton’s Connor McDavid and Leon Draisaitl (four apiece).  Eichel is 2-5-7, minus-1, in nine career games against the Capitals.

It might be a sign of Buffalo’s depth and growing maturity that they are 4-1-1 in games in which Eichel did not record a point this season.  But there is still room for youth.  The Sabres have dressed one rookie this season, winger Victor Olofsson.  And quite a rookie start he has had.  Olofsson leads all rookies in goals (six), is tied for the lead in points (ten, with Colorado’s Cale Makar and Toronto’s Ilya Mikheyev), and leads in shooting percentage (21.4 percent, minimum: ten shots on goal).  He is, however, something of a one-note wonder.  Every one of his six goals have come on power plays, a power play goal total that also leads this rookie class, as do his eight power play points.  He has been a big part of the league’s third-best power play (29.8 percent).

For Olofsson, it has been quite a journey to this point.  He was taken in the seventh round (181st overall) of the 2014 Entry Draft, one of only three players from the last round of that draft to have appeared in at least one NHL game (Los Angeles pick Jacob Middleton has appeared in four games for San Jose, and Anaheim’s Ondrej Kase has appeared in 160 games).  But he also gave hints of this kind of production last season in a short six-game stint to end the season over which he was 2-2-4.  This will be Olofsson’s first appearance against Washington. 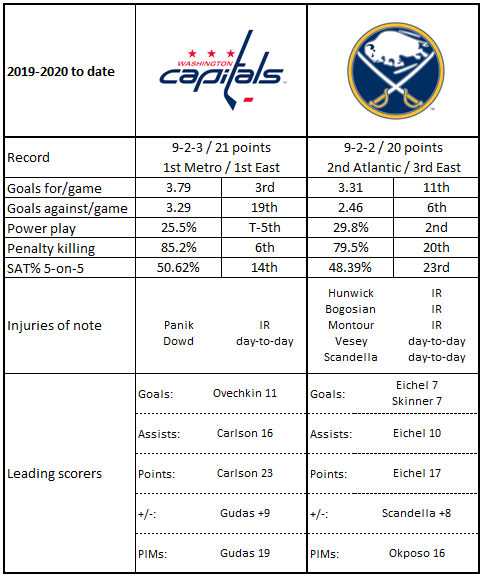 2.  “Three” is the demarcation line between wins and losses for the Sabres so far.  Buffalo is 6-0-0 when allowing fewer than three goals, 3-2-2 when allowing three or more (including goals credited in the Gimmick).

4.  The Sabres have taken a lead into the third period eight times in 13 games.  They won them all, one of 15 teams with a perfect win-loss record when leading after two periods, but the team with the most wins in posting that perfect record (tied with Boston).

2.  The difference in eras… In the Caps’ nine-win October in 1990-1991, they recorded five or more goals in eight of their nine wins.  They did it four times in their most recent nine-win October.

3.  The Caps might have had a ten-win October had they managed the third period of their game against Edmonton better, giving up a two-goal lead in the third period before losing in overtime, 4-3.  The same could be said of the October 1990-1991 nine-win team.  The circumstances were similar – in the midst of a five-game road trip, the middle three being in western Canada (Edmonton, Vancouver, and Winnipeg), the Caps taking a lead into the third period against the Jets.  But the Caps gave up goals to Stu Barnes and Ed Olczyk on power plays less than five minutes apart early in the period to lose the lead to Winnipeg and, ultimately, the game by a 6-5 margin.

4. The Caps might have been Buffalo’s “Secret Santa” in 1975.  The Sabres hold the single game record for goals scored against the Caps.  It would appear safe.  Buffalo scored 14 goals in a 14-2 win over the Caps on December 21, 1975.  Other lowlights….the Sabres out-shot the Caps in that contest, 50-16…this game remains the worst single-game goal differential in Caps history (minus-12)…the Sabres scored five of their goals in a span of 4:57, six in a span of 8:42.

5.  In 81 games played on home ice in the all-time series between the Caps and Sabres, Washington has recorded only two shutouts of the Sabres – Jim Carey (January 26, 1966) and Semyon Varlamov (November 25, 2009) accomplishing the feat.  Carey faced only 20 shots in his shutout, while Varlamov faced only 25 in his.

Marcus Johansson is one of 27 players in Capitals history to play in 500 or more games with the Caps (501), one of 29 with at least 100 goals (102), and is one of 21 Capitals to record at least 20 game-winning goals in his Capitals career (20).  He is also in his third season removed from being a Capital, having dressed for three teams – New Jersey, Boston, and now Buffalo – in two-plus seasons since last skating for the Caps in 2016-2017.  He has now played exactly 100 regular season games since leaving the Caps.

While his overall production over those 100 games resembles his production from his seven seasons in Washington (from 0.20 goals per game to 0.22 goals per game, and from 0.58 points per game to 0.53 points per game), he is off to a better start in Buffalo with four goals and nine points in 13 games so far.  But the odd part about Johansson’s start is how little it matters, and that might be an indicator of Buffalo’s state of development, becoming a more balanced team.  Johansson has points in seven of 13 games, and the Sabres are 4-1-2 in those games.  They are 5-1-0 in the six games in which he does not have a point.  They are 4-1-1 when he skated more than 17 minutes, 5-1-1 when he did not.  They are 3-1-1 when Johansson recorded at least on shot on goal, 6-1-1 when he did not (he has nine shots in 13 games, second fewest on the team, ahead of only John Gilmour (three shots), who has played in only two games).  Johansson is 2-3-5, minus-2, in five career games against the Caps.

Lars Eller is one of those players that will never bring fans out of their seats with an end to end rush, will not stickhandle through three players to roof a puck under the crossbar, won’t thread a no-look pass to a teammate for a tap-in goal.  Not often, anyway.  Eller is a player who requires multiple viewings to develop an appreciation.  Since he arrived in Washington in a trade from Montreal for a pair of second round draft picks in June 2016, he is tied for sixth in goals scored for the Caps (47, with Tom Wilson), is eighth in assists (62), sixth in points (109), fifth in shots on goal (467), fourth in faceoff win percentage (49.1; minimum: 500 faceoffs), third in blocked shots among forwards (155), fourth among forwards in takeaways (133), and is second in penalty killing ice time per game among forwards (2:07; minimum: 100 games).  He carries a lot of expectations, not as a star, but as a support player – a third line center who can provide clutch scoring (he has two of the most important postseason goals in Caps history, the overtime winner in Game 3 against Columbus in the first round of the 2018 playoffs to allow the Caps to avoid going into an 0-3 hole and the Stanley Cup-clinching, game-winning goal against Vegas in the 2018 final), taking minutes against opponents’ top lines, killing penalties.

These are teams at different points on the arc of competitiveness.  Buffalo has missed the postseason in each of the last eight seasons and failed to reach the 40-win mark in any of them.  At the other end, Washington reached the playoffs in seven of the last eight seasons, and only once in seven full seasons (not counting the abbreviated 2012-2013 season) did they not reach 40 wins, finishing with 38 in 2013-2014.  Only the Pittsburgh Penguins and St. Louis Blues had more wins (370 and 365, respectively) and standings points (802 and 788) over those eight seasons than did the Caps (360 and 787).  The Sabres have played well in the early going this season, but it is too soon to rule on the matter of whether they are contenders or pretenders.  This will be perhaps their stiffest road test of the young season, the Penguins being the only quality team, based on record, they have faced on the road to date.  They will find out there is still work to be done.