When the Washington Capitals went to the locker room tied with the Vancouver Canucks at a goal apiece after 20 minutes, having come up empty on a penalty shot and two power plays, they might have thought it an opportunity wasted.  When they got out of the second period still tied, 1-1, despite being outshot, 16-3, they might have thought themselves fortunate.  When they took a lead on a goal by Mikhail Grabovski less than two minutes into the third period, they might have looked skyward and thought the hockey gods were going to let them escape Rogers Arena with their third win in four tries on their five-game road trip.

It turns out the hockey gods have a sick sense of humor.  The Canucks tied the game again barely a minute after the Grabovski goal, then took the lead on a goal barely two minutes after that.  It was all that the Canucks needed, holding the Caps to just three shots on goal in the last 15 minutes and skating off with a 3-2 win.

The Caps certainly had their chances, starting just 79 seconds into the game when Alex Ovechkin hauled the puck down the right side, pulled the puck past Alexander Edler, spinning the defenseman around, then darted in on goalie Roberto Luongo.  Edler tripped Ovechkin going by, nullifying the scoring chance and drawing a penalty shot.  Unfortunately, the Rogers Arena ice then pulled a page from the Verizon Center operations manual.  Ovechkin skated in on Luongo, but the puck would not settle, and Ovechkin could not lift a snap shot over the glove of Luongo, who smothered the attempt at the left post.

It was just the start of a fast-paced first period that realized its first goal when Zack Kassian and Chris Higgins broke out of the Canuck zone with speed.  As Higgins and Kassian were exchanging passes, Nate Schmidt drifted toward the middle toward Mike Green to create a two-defenders-on-one-puck-carrier situation.  The puck squirted through Schmidt’s legs, who then got turned around as Kassian took the puck down the right side.  It gave Kassian an open shot from the right wing faceoff dot that he rifled past goalie Michal Neuvirth’s glove, a goal that Neuvirth had to want back.

Three minutes later Jason Chimera tied the game on a play that started when Joel Ward outfought a pair of Canucks for a loose puck along the right wing wall and wristed a shot that Luongo turned aside.  The puck was headed up the boards and out, but Nate Schmidt flagged it down, then sent a cross-ice pass to Mike Green at the right point.  Green wristed a shot that had eyes, eluding a clot of bodies in the shooting lane until the puck got to the edge of the crease to Luongo’s right.  Chimera redirected the puck under Luongo, and the score was tied at 14:36 of the first period.

There was no more scoring in the first period, and the second period went scoreless as well, due in no small part to Neuvirth, who made up for the soft goal he allowed in the first with a 16-save period.  The effort seemed to be rewarded in the second minute of the third period on a fine effort by Chimera, who first poked a loose puck past defenseman Kevin Bieksa, then beat him to the loose puck just inside the Vancouver blue line.  Then, with Tom Sestito closing on him, Chimera dove and one-handed a pass into the middle where Mikhail Grabovski appeared.  Grabovski wasted no time wrong-footing a wrist shot past Lunogo’s glove to give the Caps a 2-1 lead.

It was another lead the Caps could not hold, though.  Ryan Kesler tied the game 61 seconds later on another shot that, if Neuvirth should not have stopped, then he should not have allowed.  Ryan Stanton took a long shot from the left point that Neuvirth seemed to track all the way into his glove.  But he did not field the shot cleanly, the puck popping out to his left and out of reach to dive on.  Kesler jumped in and snapped the puck past Neuvirth before he had a chance to square himself to the play.

A little more than two minutes later, the Canucks had their game-winner.  It was a clinic on the subconscious communication between twins, if you subscribe to that sort of thing.  Chris Tanev was the third man in a high cycle with Daniel and Henrik Sedin.  Tanev walked the blue line, drawing Marcus Johansson to him.  That allowed Tanev to leave the puck for Henrik at the blue line in the middle of the ice.  As Tanev dropped down low on the right side, Henrik took his place at the right point where he left the puck for Daniel coming up the right-wing boards.  Daniel circled left, around Johansson (who seemed to peel off Daniel to cover Tanev, who had circled all the way back to the blue line and, in fact, out of the zone).  Daniel had nothing but space to step in and fire the puck past Neuvirth for the game winner.

-- The last goal should never have counted… 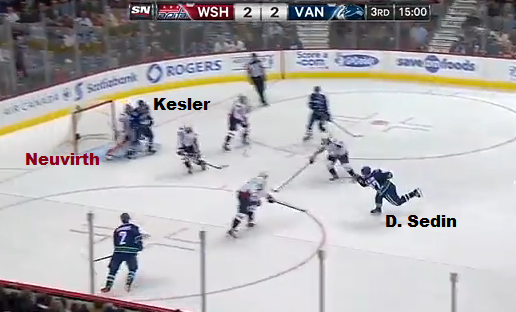 …Contrary to the commentary on the Vancouver feed, those are Ryan Kesler's skates in the paint, standing in front of Neuvirth as the puck is going by.  Rule 69.1 states, “The overriding rationale of this rule is that a goalkeeper should have the ability to move freely within his goal crease without being hindered by the actions of an attacking player. If an attacking player enters the goal crease and, by his actions, impairs the goalkeeper’s ability to defend his goal, and a goal is scored, the goal will be disallowed.”  Sure looked like “impair" was the operative verb there.

-- In the prognosto, we said this…

“Daniel and Henrik Sedin both recorded points in nine of 13 Canuck games so far this season.  Vancouver is 7-2-0 in those games.  Keeping them clean on the score sheet could be a tall order, at least as far as keeping Henrik off the board is concerned.  He has points in 12 of 13 games.  Only San Jose has blanked him.  In fact, the Sharks are the only club to date to keep both Sedins off the score sheet in a game this season so far.”

When the Caps had their 2-1 lead, neither Sedin had a point.  Tying goal…Daniel gets an assist.  Game-winning goal…Henrik assists Daniel.  Make that 10 of 14 games for the Sedins.

-- Three straight games without a power play goal is a season high for Washington, and that makes 1-5-0 in games in which they do not score one.

-- On the good side of special teams, the Caps have now killed off 25 in a row over more than seven consecutive games.  It is their longest streak of games without giving up a power play goal since a seven-game streak from January 16 through February 1, 2011.

-- With his goal on Monday, Jason Chimera has goals in three straight games, his first three-game goal streak since he did it for Columbus in December 2009.

The Caps are getting the crap kicked out of them at even strength.  And tonight they got the crap kicked out of them on special teams, too (the Canucks had 15 power play shots on goal, the Caps had four).  This was not as disappointing a loss as that to the Flames on Saturday, mostly because of the quality of competition,  and despite the huge Canuck advantage in possession, the Caps were at least in it to the end.

However, there are still the same things hounding this team, and they look as if they are making little to no progress improving on them.  But for a fine penalty killing run, the Caps might be in a world of hurt in the standings at this point.  As it is, it merely has the sting of opportunities passing them by.