So was the moral of the story in Aesop’s fable of The Fox and the Lion. And just as in that fable, so the Washington Capitals and New York Rangers might have developed a sense of contempt for one another having played one another in three playoff series over the last four years.  As we prepare to watch these familiar foes take the ice against each other one more time, it might be instructive (or, failing that, entertaining) to look at the history of the three series.

If you are interested in looking at the contests on a game-by-game basis, here are our post-game reviews of each:

These teams have played 19 times against one another in three playoff series over the past four season.  The Caps hold a 3-2 edge in series won and an 11-8 edge in wins and losses.  Here are some other facts and thoughts on the history of this long, strange playoff relationship…

-- Of the Rangers eight wins, seven were by one goal, two of them in overtime.  The only time the Rangers won by more than one goal was in Game 1 of last spring’s Eastern Conference semifinals, a 3-1 win.

-- Overall, the Caps have outscored the Rangers in each period: 13-7 in the first period of games, 16-12 in the second period, and 14-13 in the third period.  Each team has two overtime goals in the series.

On the surface we have two teams that know one another.  But in fact there has been a lot of turnover on these rosters.  The teams will be familiar with one another from last spring’s tightly fought series (13 skaters that dressed for the Rangers saw action last spring; 15 skaters for the Caps), but there isn’t much of a shared playoff history beyond that.  That will make the series familiar enough to fans by the colors of the jerseys, but whether it resembles any of the previous three series is a far more uncertain matter.

Posted by The Peerless at 11:54 PM No comments:

Washington Capitals -- That Was The Week That Was: Week 14

It is a theme in how-to books on success, it is a theme for fables, it shows up in thoughts on business.  In this, the last week of the regular season, let’s take a look at how the Washington Capitals finished. 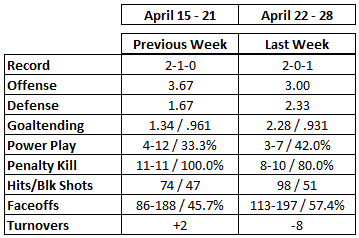 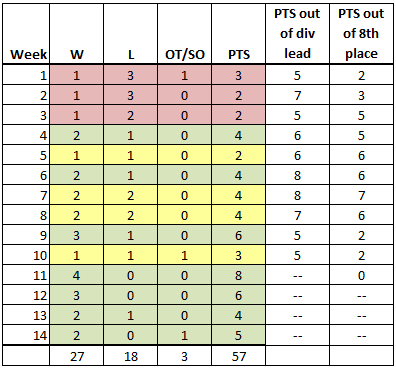 The Caps finished the season with 11 consecutive weeks of going .500 or better in earning standings points.  Their 2-0-1 week was their fourth consecutive winning week in that regard over which they went 9-1-1.  It was all part of a finishing kick in which they went 15-2-2 after losing in Pittsburgh on March 19th.  The three games played at home this week allowed the Caps to rehabilitate what had been a mediocre home-ice record.  They ended their home season on a 7-0-1 run to go 15-8-1 after starting the 2013 season 8-8-0 on Verizon Center ice.

Over their long push to make the playoffs the Caps were led on offense more often than not by Alex Ovechkin.  He had a good week to end the season (2-3-5) to finish atop the league rankings in goals scored and win the Maurice Richard Trophy that goes with (he is the first three-time winner of the trophy since it was introduced in the 1998-1999 season).  This week, however, the story was Mike Green.  The defenseman finished the week 2-3-5, led the team in shots on goal (16), and ended the season with the most goals of any defenseman in the league – 12 in only 35 games played.  Folks have wondered if Alex Ovechkin is “back”… more attention should be given to Green’s comeback from injury and low production over the last two seasons.

The Caps had issues with shots on goal allowed all season, and this week was no different.  The 102 shots on goal by Winnipeg, Ottawa, and Boston are consistent with the season profile (34.0 shots/game this week, 32.3/game for the season).  It puts a premium on holding teams to poor shooting percentages, and in this respect the Caps are middle-of-the road.  The 6.9 percent shooting percentage this week was lower than that the Caps recorded for the season (8.4 percent), and allowed the Caps to finish fifth among Eastern Conference playoff teams heading into the playoffs (better than Pittsburgh (8.5), Montreal (9.6), and the New York Islanders (10.0)).  And it is not as if their improved fortunes in wins and losses made a difference.  The Caps allowed 32.6 shots per game in going 15-2-2 in their last 19 games

After Week 5, Caps goaltending was not what one would call “elite.”  To that point the Caps goalies had a cumulative 3.24 goals-against average and a .897 save percentage.  Since then, things improved significantly.  This week, both Braden Holtby and Michal Neuvirth got work, and both performed well.  Holtby stopped 56 of 61 shots (.918 save percentage), but his was a case of being good early and late with some issues in-between.  Holtby stopped 14 of 15 first period shots (.933) and 21 of 22 third period shots (.956), but he was only 21 for 24 in the middle periods of the two games he worked this week (.875).  Meanwhile, Michal Neuvirth was superb in his first action since April 9th.  He stopped 39 of 41 shots in a 2-1 overtime loss to Ottawa.  Despite the lack of work, he is 2-0-1, 1.99, .940 in his last three appearances.  Despite serving primarily as a backup this season, he was rewarded with a new two-year, $5.0 million contract.

The Caps finished their week with their seventh 30-plus percent power play week over the last 12 weeks.  It was not a matter of consistency as much as volume.  The Caps had only one power play opportunity in each of the first two games of the week and did not score on either of the two power play shots on goal they had in each game.  But against Boston the Bruins took six minor penalties, four of them in the third period (resulting in three Caps power plays) and another in overtime of the Caps’ 3-2 win.  The Caps shot 3-for-12 against the B’s to allow them to come back from a 2-0 deficit to win their season finale.  Mike Green was the key.  He had six power play shots on goal, two of them coming in the third period – both of them resulting in goals – and another three in the overtime.  It was his last one, a shot that handcuffed Boston goalie Tuukka Rask, that provided a rebound that Eric Fehr swatted home for the win.  For the Caps, the season has been one of improvement after a slow start, then a sustained high level of performance.  It is worth noting that the 44 power play goals recorded by the Caps in 48 games exceeds their total for the entire 82-game 2011-2012 season (41). 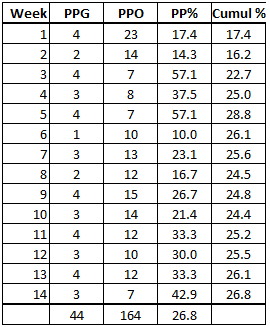 It has been a struggle, but the Caps have made improvements in their penalty killing as the season wore on.  This week, though, they fell into an old habit.  Allow three or more power play chances for the opponent, and things get dicey.  The Caps were 2-for-3 against Winnipeg and was 4-for-5 against Ottawa, the power play goal being the game-winner in the latter contest.  The Caps killed off both shorthanded situations they faced against Boston to save the week.  What it meant is that the Caps “three shorthanded situations” threshold held for the season.  The number of situations did not matter in terms of efficiency – the Caps had a penalty killing rate of 78.1 percent when facing fewer than three shorthanded situations and a rate of 77.9 percent when facing three or more.

However, the Caps were 14-3-0 when facing fewer than three shorthanded situations and 13-15-3 when facing three or more.  The best penalty killing the Caps had this season was staying out of the box.  If there is a sliver of a silver lining in this, here it is.  In the last five games in which the Caps faced three or more shorthanded situations they were 17-for-19.  An 89.5 percent penalty killing rate is not bad, no matter how many situations you face, and they have been improving, slow but sure, over the course of the season. 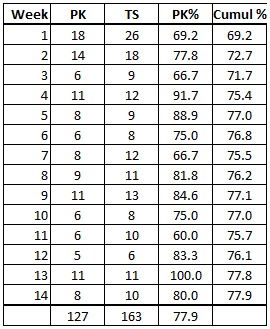 It looks bad, but the minus-8 is a function of having only 34 takeaways on the week.  No Cap had more than two takeaways in any one game.  Karl Alzner had four to lead the Caps, and maybe that (and being on-ice for only one even-strength goal against) means an up-tick in his game.

The Caps came a long way.  We pointed out on multiple occasions the unlikelihood that they would be able to overcome that 2-8-1 start. But overcome it they did, and they did it with a flourish in the final week of the season, capturing five of six possible standings points and winning the Southeast Division.  For this week, the Capitals finished much better than they started and came within an overtime slap shot of finishing the season with a perfect record for the week.  The idea of it not mattering where you start, but where you finish is one of those sayings that is more catchy than it is true, but sometimes it applies.  It makes one want to sing about it…

Posted by The Peerless at 1:10 PM No comments: