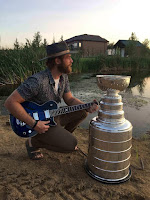 "You have brains in your head. You have feet in your shoes. You can steer yourself in any direction you choose. You're on your own, and you know what you know. And you are the guy who'll decide where to go.”
-- Dr. Seuss

Even the most attentive hockey fan might not recognize the names Chet Pickard, Tyler Beskorowany, Peter Delmas, Marco Cousineau, or Jacob DeSerres.  Those are the names of the goaltenders taken in the 2008 NHL Entry Draft ahead of Braden Holtby who have never dressed for an NHL game.  In fact, Holtby (taken in the fourth round, 93rd overall) has appeared in more than half as many games (420) as the rest of the 2008 goaltender draft class (835). 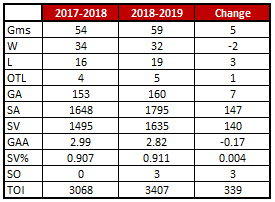 Fearless’ Take… Braden Holtby won 32 games this season.  That makes five straight seasons having won at least 30 games, tying a team record for career 30-plus win seasons (Olaf Kolzig also has five).  If you think that is not an especially noteworthy accomplishment, only four goaltenders in Caps history have recorded at least one 30-plus win season.  In addition to Holtby and Kolzig, Jose Theodore did it twice (2008-2009 and 2009-2010), and Jim Carey did it once (1995-1996).  And, after failing to record a regular season shutout in 2017-2018, he posted three shutouts this season, tying Kolzig for the career record in franchise history (35).

Cheerless’ Take…  Braden Holtby is the only goaltender in Caps history with “Stanley Cup Champion” after his name, but frankly, he has posted pretty ordinary numbers the last two seasons.  This was his second straight season with a goals against average over 2.80 after posting three straight seasons under 2.25.  It was his second season with a save percentage under .912 after three straight seasons over .920.  Over the last two seasons combined, he is 36th of 49 goalies appearing in 50 or more games in goals against average (2.90), and he is 32nd in that group in save percentage (.909).  He is 30th in even strength save percentage (.919), and his three shutouts are tied for 35th in that group.  And since his record-tying 48-win season in 2015-2016, his win totals have dropped each season (to 42, then 34, and 32 this season).

Odd Holtby Fact… Over the last five seasons, only two of 70 goaltenders appearing in at least 50 games have a higher percentage of starts among their appearances than Braden Holtby.  He started 313 of 315 games in which he appeared (99.4 percent).  That is topped only by Chicago’s Corey Crawford (236 of 237 games/99.6 percent) and Nashville’s Pekka Rinne (305 of 306 games/99.7 percent).

The Pittsburgh Penguins have been a tough nut for Braden Holtby to crack.  There are, of course, the postseason disappointments that finally ended last spring.  But the regular season contests against the Penguins have hardly been a success for the netminder.  Going into the contest at Capital One Arena on November 7th, Holtby had a career regular season record of 8-9-3, 3.10, .906, and that included a three-game run in 2014-2015 in which he stopped 90 of 91 shots and pitched two shutouts.  When Holtby took the ice on this night, he already had a loss to the Penguins on his record this season, allowing seven goals on 41 shots in a 7-6 overtime loss in the Caps’ first road game of the season.

When Sidney Crosby scored a power play goal 12:16 into the first period, it looked as if it might be another tough night for Holtby and the Caps against their chief nemesis.  But when Crosby had a chance to double the Penguin lead late in the period from point blank range on a centering pass from Jake Guentzel, Holtby turned the shot aside and kept the deficit to a goal going into the first intermission.

The big save late in the first period might have provided some momentum for the Caps at both ends of the ice.  Alex Ovechkin tied the game with a power play goal seven minutes into the second period, while at the other end, Holtby stopped all 17 shots he faced in the period.

Holtby was called upon to come up big once more mid-way through third period.  Phil Kessel chased down a loose puck along the right wing wall in the neutral zone and fed it to Garrett Wilson breaking in alone over the Caps’ blue line.  Wilson tried to go high blocker, but Holtby read the play and blocked the shot out of harm’s way.  It set up a wild finish in which John Carlson fed T.J. Oshie circling to the net, and before Crosby could close the distance to tie up Oshie, he snapped a shot past goalie Casey DeSmith for the game-winner with only 74 seconds left in regulation.  Holtby finished the game with 41 saves on 42 shots, the second-highest save total of his career against the Penguins (he stopped 44 of 45 shots in a 4-1 win in Pittsburgh in December 2014).
Game to Forget… December 2nd vs. Anaheim

Braden Holtby had games with worse numbers.  Twice this season he had games in which he stopped only seven of 11 shots in barely 20 minutes of work (against Florida and Chicago), but the game he and the Caps might want to forget en masse was when they hosted the Anaheim Ducks in early December.

The Caps raced out to a 3-1 lead after 20 minutes, Holtby stopping eight of the nine Anaheim shots he faced.  The Caps scored two more goals in the first 14 minutes of the second period to take a 5-1 lead and looked as if they could coast home to a win.  Then the wheels came off…fast.  Andrew Cogliano scored a goal a minute after Nic Dowd scored to give the Caps that 5-1 lead.  They got another one less than two minutes later to make the game interesting going into the third period.

In the third, the Caps forgot how to play with a lead, especially the part about discipline.  They took three penalties in the first nine minutes of the frame, and while they did kill off the first of the three Anaheim power plays, the Ducks scored on the next two man advantages to tie the game.  Pontus Aberg completed the comeback with a goal with just over five minutes left to give the Ducks an improbable 6-5 win.

For Holtby, there was that dreadful stretch of 20:24 spanning the second and third periods in which he allowed five goals on ten shots and surrendered the lead.  He finished the game having allowed six goals on 25 shots, his .760 save percentage being his worst for a full game this season.

Postseason…  Two seasons ago, Braden Holtby had an uncharacteristically poor postseason.  After posting a 1.87 goals against average and a .937 save percentage with four shutouts over his first four appearances in the playoffs (a 22-24 win-loss record), he went 7-6, 2.46, .909 in two series in 2017.  Last year, he rebounded in the Caps’ Stanley Cup run, going 16-7, 2.16, .922, with two shutouts (in Games 6 and 7 of the Eastern Conference final against Tampa Bay) after sitting in favor of Philipp Grubauer to start the first two games of the postseason.

Looking ahead… Braden Holtby is heading into the final year of a five-year/$30.5 million contract, after which he will become an unrestricted free agent for the first time in his career.  His current deal holds the seventh-highest cap hit among goaltenders, and when one considers that Anaheim’s John Gibson and Winnipeg’s Connor Hellebuyck have larger cap hits on their deals for the coming season (source: capfriendly.com), a former Vezina winner/Stanley Cup champion would be due a raise to at least leap-frog those two players if he has a season typical of his career as a full-time netminder to date.

If the 2020-2021 salary cap goes up at the same rate as the increase from this year to 2019-2020, the cap would be about $86.7 million.  If Holtby merits a raise to lift him above the cap hits of Gibson and Hellebuyck to, say, $6.75 million per year, he would encumber almost eight percent of the cap.  Given the other decisions that the Caps have to make this off-season, plus the looming expiration of Alex Ovechkin (after 2020-2021) and Nicklas Backstrom (after this coming season), a raise from the Caps might be a bridge too far.

Braden Holtby had something of a muddled year.  There were times, especially down the stretch, in which he looked every bit the elite goaltender he was in his best seasons.  But there were consistency issues and a vulnerability to heavy shot volumes that he had not displayed earlier in his career.  Whether this was a product of goaltending coach/director of goaltending Mitch Korn departing to Long Island with Barry Trotz after last season (he seemed to have worked magic with Robin Lehner for the Islanders this season), a defense that gave up too many quality chances, or diminished performance on his part, Holtby took quite a while to find his stride, and he could not sustain the momentum he built down the stretch of the regular season into the playoffs, particularly on the road.

It sets up something of a crossroads season ahead for Holtby, who will be looking to duplicate the timing that benefitted John Carlson in his “walk year” – a career year that sets him up for what could be a long-term contract that places him at or near the top of the compensation ladder among goaltenders.  Sadly, if that is how the season unfolds, it could be bittersweet – a successful season for Holtby and the Caps that could end with another deep playoff run followed by his departure as the business side of the sport exerts its influence.  As Dr. Seuss suggested, the player will be the guy who'll decide where to go.