The Washington Capitals took to the road for Week 2.  Last season, whether on the road (22-13-6) or at home (23-13-5), it made little difference whether home cooking was on the menu.  This week posed some special challenges for the Caps, though, as the schedule took them to western Canada, where wins have been hard to come by over the years.  So how did it work out?  Rather well. 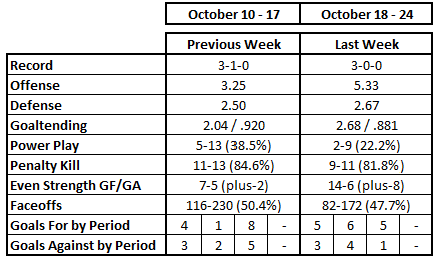 The Capitals finished the week with the second best record in the Eastern Conference and best in the Metropolitan Division.  That is what a 3-0-0 week will do.  As in Week 1, there was an issue with their opponents’ strength of schedule.  The Calgary Flames, Vancouver Canucks, and Edmonton Oilers finished the week with a combined 8-9-3 record in games not played against Washington.  On the other hand, the Caps have had a history of difficulty in that part of the world.  Since the 2005-2006 lockout, the Caps had not recorded a perfect trip to western Canada.  In fact, Washington had not finished a western Canada tour above .500 on any of their five previous trips since the 2004-2005 lockout, going 4-8-1 overall (the Caps had two two-game trips over this span of time).

The 16 goals in three games in Week 2 are better than any three-game total of goals the Capitals had last season.   It is, in fact, the most goals scored in any three game span by the Caps in the regular season (not including shootout goals) since going 3-0-0 over the October 30 – November 5, 2010 period.  The Caps scored 16 goals in three games in beating the Calgary Flames (7-2), Toronto Maple Leafs (5-4 in a shootout), and Boston Bruins (5-3).  It was the first time they did it on a road trip since January 9-13, 2010, when they scored 16 goals in beating the Atlanta Thrashers (8-1), lost to the Tampa Bay Lightning (4-7), and beat the Florida Panthers (5-4 in a shootout).

It was not a great week, but it was not altogether bad, either.  The overall numbers, particularly the save percentage numbers, were weak, but that is caught up in the shot suppression at which the Caps were pretty good in Week 2 (67 total shots allowed in three games).  Braden Holtby got the nod for the first two games of the week and went 2-0-0, 2.00, .909.  He faced only 44 shots in two games, but his performance in stopping those shots divided into a so-so performance over the first two periods of games (.897 save percentage) and a much better third period performance (.933 save percentage).

Philipp Grubauer got his first call of the season to close Week 2, and he had results similar to Holtby.  He was touched for four goals on 18 shots over the first 40 minutes of the Caps’ contest with the Edmonton Oilers (.778 save percentage), but he stopped all five shots in the third period of the Caps’ 7-4 win.

The Caps got off to a rough start on the power play in Week 2, in part with a problem that they had to deal with last season – few opportunities.  The Caps drew a blank on five power play chances in the first two games of the week.  Against Calgary and Vancouver, Washington was 0-for-5 shooting in 8:25 of total power play time.  They turned things around against Edmonton, twice scoring on their only shot of a power play, going 2-for-4 in opportunities and shooting 2-for-4 in 5:07 of power play time.  As it was it salvaged what ended up being a good, not great week on the man advantage, going 2-for-9 in opportunities and shooting 2-for-9 in 13:32 of total ice time (0.66 shots per minute).

It would have been a week in which the old saying, “the best penalty kill is not having to kill penalties,” had some merit if the week ended on Thursday.  The Caps faced only five shorthanded situations in the first two games of the week, stopping both of Calgary’s opportunities and killing off two of three Vancouver power plays.  The Caps held the Flames and Canucks to four power play shots on goal in 9:03 of power play ice time, a rather impressive result.

The problem the Capitals faced on the penalty kill in their last game of the week, against the Edmonton Oilers, was having to kill so many power plays.  Edmonton was awarded six power plays on Friday night, including a brief (eight-second) 5-on-3 advantage.   What the Caps managed to do, even here, was keep Edmonton pucks from getting to the net.  Washington allowed only four shots in 9:50 of Oiler power play ice time.  For the week, the Caps allowed two goals on eight shots in 18:53 of power play ice time (0.42 shots per minute).

Overall, it was not a good week in the circle for the Caps, but there are the aggregate numbers (47.7 percent wins for the week), and there is the fact that Washington was over 50 percent in two of the three games.  The problem was getting schooled in the faceoff arts in Vancouver, where the Caps managed only 16 wins in 46 draws (34.8 percent).

The Caps had similar results by zone.  They finished at 50 percent or worse in each of the three zones for the week, but largely the product of poor performances in each zone in the middle game of the week against the Canucks.  If there was a bright spot here, it was the performance of Jay Beagle.  He finished the week winning 22 of 34 draws (64.7 percent), leaving him at the top of the league rankings among players taking at least 30 draws (63.7 percent). 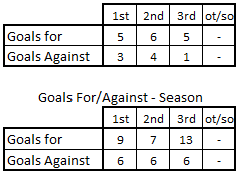 The Caps could be said to have applied consistent pressure over the course of games in Week 2.  While that would be true, what set Week 2 apart was the Caps’ performance in the second period of the last game of the week.  Coming off a game the previous night in Vancouver, the Capitals took a 3-2 lead into the first intermission, then allowed a game-tying goal in the first minute of the second period against the Edmonton Oilers.  Washington scored three goals in a span of 5:32 to create separation from the Oilers on their way to the 7-4 win that closed the week.  The other noteworthy fact in scoring by period for the week was at the other end – one goal allowed in three third periods of games, that coming late in the Caps’ win over the Oilers.

Three wins, outscoring opponents by a 16-8 margin, doing it all on the road in what has been, for the Caps, a particularly hostile environment over the years.  You would have to say, “well done.”  No week is perfect (ok, unless you are the Montreal Canadiens these days), but this is just about as good as it gets for a road trip.  The offensive balance was particularly striking.  Nine players had three or more points (that is, at least a point per game) for the week.  Nine different players recorded goals.  Washington had 12 different multi-point games from eight different players.

The Caps are now off until they host the Pittsburgh Penguins on Wednesday night in a national television game.  On the one hand, they have earned a couple of days off before getting back on the rink for practice on Monday.  On the other, one would like to see the Caps sustain the momentum they generated from Week 2.  It is a long season, though.  Let’s just savor the moment.