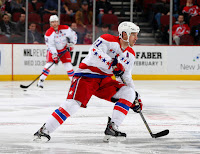 “The only thing we know about the future is that it will be different.”
-- Peter Drucker

Although Brooks Laich is 11th in Washington Capitals history in games played (682), he has had two distinct careers with the Caps.  In the first, covering eight seasons and 556 games, Laich’s 82-game scoring pace was 17-24-41, plus-1.  He was an all-situations player, averaging 10 even strength goals per 82 games played, six power play goals, and a shorthanded goal for good measure.  He averaged more than 170 shots on goal, and at his peak he was averaging more than 18 minutes of ice time per game.

Then the 2012 lockout took place, and Laich sustained an injury while playing in Europe during the hiatus.  It put in motion a series of false starts and setbacks that characterized Laich’s second career in Washington.  After being among the most durable players for the club in the last five years leading up to the 2012 lockout (missing only four of 410 regular season games), he appeared in only 126 of 212 games over the last three seasons.  In those 126 games he had fewer goals overall (16) than he averaged per 82 games in his “first” career (17), fewer assists (23 to 24), fewer points (39 to 41), while going minus-7.  He lost his regular turn as a power play performer as the Caps went to a scheme that had no room for the left-handed shooting Laich in the middle of the 1-3-1, recording only one power play goal in those 126 games.  His shot total over those games (191) barely eclipsed is 82-game average in the first part of his career in Washington (172).

Brooks Laich is a different player than he was five years ago.  Whether that is a product of his injuries, the changes in the club over that time, growing older, or a combination of factors, he is different.  On a team that last year had Alex Ovechkin, Troy Brower, Andre Burakovsky, and Marcus Johansson among the scoring line wingers, and with the power play employing a style not compatible with Laich’s profile, he became more limited in his playing dimensions than he was in his prime production years.  He was seventh among the club’s forwards in even strength ice time per game (12:09, his lowest since the 2008-2009 season) and led the club’s forwards in average shorthanded ice time (2:10).  He was getting more defensive responsibility, based on zone starts, where his relative fraction of offensive to defensive zone starts at 5-on-5 (minus-6.5 percent) was the most heavily weighted defensive zone start finish for any full season in his career (numbers from war-on-ice.com).

Laich went long stretches without an impact in the offensive end of the ice last season.  He had a 26-game streak without a goal from January 8th through March 5th, and his longest points streak of the season was three games (March 28-31).  And it was not as if his scoring came at the expense of stiff competition.  Five of his seven goals were scored against teams that did not reach the postseason.  Speaking of the postseason, he had two points (a goal and an assist) in 14 games, his lowest output in the playoffs of his career.  It might have been a reflection of his ice time; his 11:56 per game was the lowest (by almost six minutes per game) of any of his six playoff seasons.

The Big Question… Is this as good as it gets?

When Brooks Laich signed a six-year/$27 million contract extension with the Capitals in June 2011, he was coming off a run of four seasons in which he went 85-112-197, plus-27 (a 22-28-50, plus-7 pace per 82 games).  He had another solid season in the first year of his new deal (16-25-41 in 82 games), but then injuries hit and circumstances changed.  He has not been the player deemed worthy of a $4.5 million a year contract for some time now, and the question becomes whether or not he can approach his pre-injury production profile now that he is (one hopes, at long last) healthy.

Absent injury, it is highly unlikely he is going to get much, if any, scoring line or power play duty.  But, he remains a versatile player who can play any forward position.  He could battle Jason Chimera for the left side slot on the third line, or he could center that line.  In any case, it would seem likely that his role is going to be in filling in on the bottom six of the forward squad.  It does not bode well for a return to the levels of production in his best years, but the combination of his experience (as the second-longest tenured Capital in games played) and versatility could make him a valuable asset nonetheless.

If not a “power forward” in the commonly used sense of the term, Brooks Laich was something of a “tweener” forward when he was at his best, a player who could contribute in a variety of ways at both ends of the ice, able to chip in on offense at even strength or on the power play, and able to shoulder a significant defensive and penalty killing load.  Laich’s role will be different  with this club.

One thnig that will need to be different, at least from this past season, is Laich’s performance in the postseason, should the Caps go that far.  In his first five appearances in the playoffs he averaged well over half a point per game (30 points in 51 games).  Last season he had only a goal and an assist in 14 games.

Brooks Laich had a very different sort of off season in his off-ice life.  Now, with complete health (or something approximating it), a different role, aiming for a different postseason result, Caps fans would like to Laich’s immediate future on the ice to be a bit different from his recent past as well.