The Peerless Prognosticator is ON THE AIR!!! -- Caps at Flyers, March 22nd

The Caps start the second half of their six-game road trip tonight with a visit to the City of Brotherly Love, also known as the Home of the Worst Sports Fans in America. If you haven’t heard, GQ magazine conducted what it called a “heavily researched, highly scientific accounting of the bleacher creatures, bottle-throwers, couch-torchers, sexual harassers, projectile vomiters, and serially indifferent bandwagon-hoppers marring our national landscape.”

If you’re going to be the best at something, there might be worse things. But the fans of the Philadelphia Phillies and the Philadelphia Eagles finished one-two in this assessment, which leaves the fans of the Philadelphia Flyers feeling, well, left out. After all, there was the episode in 1972 – before the Flyers would find their inner Philadelphians and become the Broad Street Bullies – when the fans got into it with the St. Louis Blues. It was a brawl that resulted in St. Louis Coach Al Arbour getting a gash in his head, four Blues players hauled off to the hooskow, and a statement from then Mayor Frank Rizzo (no shirinking violet himself) that “this community will not tolerate hooliganism [he was speaking of the Blues]…we probably didn’t need our police officers in that situation. I believe our residents could have taken care of the matter on their own.”

Then there was the more recent experience of Montreal sports writer Pat Hickey after a playoff game in Philly. It was not bad enough that the Flyers had trashed the Canadiens by a 6-0 score in Game 1 of the 2010 Eastern Conference finals. Hickey returned to his 1999 Accord in the parking lot to find that his car was covered in trash, had its Quebec license plates removed, and had a tire slashed. Hickey, in what must be the kind of reserve that is in a Canadian’s DNA, remarked, “it was a bit disturbing.”

And, of course, there is the incident from 2001 in which a Flyer fan confronted Toronto Maple Leaf Tie Domi, who was in the penalty box (perhaps in fairness, Domi was alleged to have been spraying water from a water bottle on fans in the first couple of rows). What makes this even more “Philly” is that the fan later sued Domi. And not just Domi, but the linesman, the Maple Leafs, and the owner of the arena and the Flyers.

Flyer fans have a chance to add to their storied history when the Capitals visit this evening with a squad that can only be referred to as “decimated.” Alright, not even that. The original definition of the term “decimate” had its roots in Roman history as a military punishment -- to select by lot from a group and kill every tenth member. The Caps will be missing more than a tenth of their complement of players this evening with Tom Poti, Mike Green, Jason Arnott, and Alex Ovechkin out. Eric Fehr and John Erskine are nicked as well, leaving the Caps severely undermanned in their effort to catch the Flyers in standings points atop the Eastern Conference.

While the Flyers will be catching the Caps at something less than full-strength, the Caps will be visiting a Flyers team that has been treading water for the last month. Since beating Florida back on February 16th by a 4-2 margin, Philadelphia is 6-5-3 and has seen an 11-point lead over the Caps reduced to a pair going into tonight’s game. The overall numbers look like this: 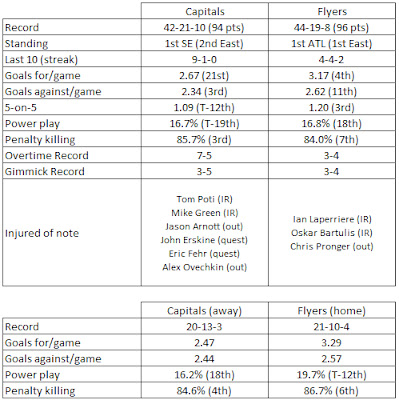 In the 6-5-3 run the Flyers have been outscored 45-37. And that speaks to a persistent problem for the Flyers – goaltending. At the moment it appears that the Flyers will be relying on a rookie to backstop them in the playoffs. Sergei Bobrovsky has had a fine rookie campaign (26-11-5, 2.56, .916), but he has been showing signs of hitting a wall in the late going. Since the All-Star Game break, he is 5-5-2, 2.91, .905. In his last five appearances he has allowed four or more goals twice, and in another appearance he allowed three goals on 18 shots in 33 minutes of relief work. As the Flyers wind their way to the playoffs, Bobrovsky is 10-9-3 against current playoff qualifiers. Against the Caps this season he is 1-0-1, 2.47, .922.

Only two Flyer forwards have dressed for all 71 games played this season, and one would be hard pressed to find to more different players. Claude Giroux is as close as the Flyers get to having a “finesse” player. Giroux has had two fights in his NHL career (Ottawa’s Nick Foligno and Colorado’s Marek Svatos, for the record), which almost disqualifies him for membership as a Flyer. But Giroux has shown himself to be a supremely skilled player who has improved significantly from year to year. As a rookie two seasons ago he provided a glimpse of his talent with 27 points in 42 games. He improved to 47 points last season, and this season he leads the Flyers with 66 points in 71 games. He has been carrying the load lately, too. In his last 13 games he is 4-10-14, plus-1. In three games against the Caps this season he has a pair of goals, and in his career is 3-1-4, minus-4 in nine games against the Caps.

The other forward playing in all 71 games for the orange and black is at the other end of the Flyer tough guy spectrum. Scott Hartnell leads the Flyers in penalty minutes this season (130), while his 20 goals and 43 points provides a mix of toughness and skill. The six fights he has this season is third on the team behind Daniel Carcillo and Jody Shelley. What he has not been doing lately, though, is scoring. March has been a rough month for him. Starting with a 17-penalty minute, no point, minus-2 performance in a 3-2 loss to Toronto, Hartnell is 1-2-3, minus-1 in nine games this month. Hartnell has one assist in three games against the Caps this season and is 10-7-17 in 21 career games against Washington.

On defense, the Flyers have five 20-minute per game players. One of them – Chris Pronger – will not dress tonight. That means that the role of big, ornery defenseman probably falls to Braydon Coburn. The Flyers are going to get little offense from Coburn, although he does have 14 points this season, including a two-point game against the Rangers on February 20th. However, in the 12 games since, Coburn has but one assist, and he is a minus-6 (after being plus-18 in his first 59 games). The plus-minus figure for Coburn is not necessarily a reflection on his play alone, but it mirrors the struggles the Flyers have had recently. He has struggled against Washington, even while posting respectable offensive numbers. In 20 career games against the Caps he is 2-6-8, but is also a minus-6. Tuesday also happens to be his worst day of the week this season for plus-minus. He is minus-6 in 12 Tuesday games.

Richards is the heart and soul of the Flyers, a player who plays bigger than his listed 5’11”, 195. He had a recent three-game streak without a point, but seems to have snapped out of that with a goal and four assists in his last four games. But of interest in this game is the fact that Richards is 7-11-18 in 21 career games against the Caps, and of that scoring line, half of his points (two goals, seven assists) have come on power plays. If Richards can solve the Caps’ third-ranked power play (fourth on the road), it is likely to be a good night for the home team.

The Alex that is playing tonight is a mirror image of Richards in terms of his record against this opponent. In 18 career games against the Flyers, Semin is 9-11-20, and half of his points (four goals, six assists) have come on power plays. Semin is the definition of “streaky.” Of his 25 goals, nine have come via hat tricks and another seven have come in streaks of three and four consecutive games. He does not have a goal in any of his last five games after scoring in three straight. And, Semin has struggled on the road this season with only eight of his 25 goals and 18 of his 48 points coming away from Verizon Center. If Semin scores tonight (he has played in two of the three games in the series this season, recording a goal and an assist), things will be looking good for the visitors.


1. shhhhhhhhhh… [Name of Large Interstate Banking Firm] Arena can be among the most intimidating venues in sports, let alone hockey. In a big game like this, if the Flyers get out to a lead early and get the crowd in it, things could turn nasty. The Flyers are fourth in the league in winning percentage when scoring the first goal, and they do it often – 42 times in 71 games with a 32-6-4 record. Getting that first goal will help turn the noise down.

2. Ready, Fire…Fire Again…Fire Some More. Sergei Bobrovsky is 19th in the NHL in save percentage while defending against an opponent’s power play (minimum 20 games). If the Caps get a power play (and these things are not guaranteed – in the Caps’ first visit to Philadelphia this season they had no power play opportunities), and they are whipping the puck around the perimeter, they are playing right into the Flyers’ hands by not taking advantage of a weakness in goal. Get pucks to the net.

3. Trust. With Ovechkin out, the temptation is for guys to try to do more. That could lead to a lot of free-lancing and one-on-one play. Trust the system you play.

In the end, this game probably means more to the Flyers than to the Caps. The Flyers have not beaten a playoff-eligible team in regulation in more than a month. The last time they beat a playoff-eligible team from the East in regulation at home was in January (Montreal, 5-2, on January 25th). This is a good team, but hardly a colossus. Even as depleted as the Caps will be tonight, there is no reason this should not be a competitive game at the very least. Hopefully, Flyer fans will be on (what passes for them) good behavior and limit their displeasure to boos, because when the final horn sounds…