The Peerless Prognosticator is ON THE AIR!!! -- Caps vs. Lightning, November 10th

Winding down after a thrilling 3-1 win over the Rangers on Saturday night, we were thumbing through the ol’ TV Guide to see what was on the tube on Sunday morning. We found an old episode of a show on PBS that was, well…illuminating…

GUEST: What started my player collection was this one right here.

GUEST: I found this one in Philly – Philadelphia.

APPRAISER: But this wasn’t really a purchase, was it?

GUEST: No, I traded for him – for a couple of draft picks, but then I signed him to a big contract -- $3.5 million, four years.

APPRAISER: You did WHAT?! OK, OK…what else have you brought?

GUEST: Well, I picked up this rather recent piece – only 28 years old – for seven years at $31.5 million. Think I got a good deal?

APPRAISER: Well, how has he performed?

GUEST: 51 points in his best year.

APPRAISER: And you’re paying $4.5 million a year?...Oh, yeah…you got a great deal (laughing). I see you have more…

GUEST: Now here’s a nice piece…rough around the edges, he’s been to five other cities before I gave him a $2.4 million contract.

APPRAISER: And he’s how old?

APPRAISER: And this one is how old?

APPRAISER: It's an absolutely..uh, interesting collection. Have you brought anything else?

GUEST: I have an old goaltender…more than 300 wins, been to a Stanley Cup final.

APPRAISER: OK, so how old is this one?

APPRAISER: Well, of course he is. And let me guess, you signed him to a great deal.

APPRAISER: I see you have a collection of other pieces here…

GUEST: Oh, yes... a Vrbata, a Hall, and this delightful Meszaros…

APPRAISER: For how much?

GUEST: Well, no, I’m not…but all together, how many points do you think I’ll get with this collection?

APPRAISER: How many do you think?

APPRAISER: There, there…you’re new at this, so don’t worry, you could get better at this.

HOST: And thanks to our guest tonight on the Antiques Roadshow, Oren Koules. Join us next time, when we check in with the Detroit Red Wings and their collection of antique finery…


It’s the last game of the three-game home stand as the Caps host the Tampa Bay Lightning. The Caps have won the first two games of the home stand and remain unbeaten in regulation at home (5-0-1). The Lightning come to town on a 5-2-1 run and a 3-2-1 road record. Looking at the comparison of team statistics, there are a couple of numbers that stand out… 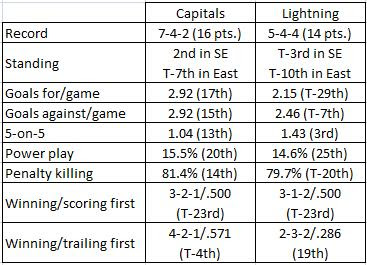 …first, 5-on-5 play. While the Caps started the year quite well in this area, it is Tampa Bay that looks to have the substantial edge here, which argues for the Lighting looking for a more loosely called game. But it’s hardly seemed to matter to the Caps whether they start well or not. In fact, they are doing slightly better in spotting the opponent a lead. That is not, however, a long-term formula for success.

These teams are experiencing something of a role reversal in the scoring numbers. The Lightning – long more of a run and gun sort of team with the likes of Vincent Lecavalier, Martin St. Louis, and the departed Brad Richards – is finding a way to win through goaltending and defense. Meanwhile, the Caps – a team with more of a tradition of grit and team defense – is doing it more with finesse and top-end skill, although even here their performance has been something less than folks might have expected.

What Tampa Bay does recall from their past is balance. Lecavalier, St. Louis, and Vaclav Prospal, returning to Tampa after a stint in Philadelphia, are all in double digits in points (compare that to Washington, with one player – Alexander Semin – in double digits). Lecavalier, with 6-5-11 in 13 games, is on a pace for 69 points. That would be a lower total than any season since he had 66 points in 2003-2004. Some might see that as disappointing, untll they remember that 2003-2004 was the year the Lightning won their only Stanley Cup. Lecavalier does, however, seem to come up big against the Caps. In 52 regular season games against the Caps, he is 24-27-51. The interesting stat for him might be that he has three career shorthanded goals against Washington, although it seems unlikely he’d add to that total – he’s averaging 14 seconds of shorthanded time on ice so far.

But the story at forward is all the additions. Tampa Bay loaded up on imports in the off season – Ryan Malone, Gary Roberts, Mark Recchi, Adam Hall, Radim Vrbata. Combined, this group is 6-9-14, -4 (Vrbata missed five games with injuries). We’ll leave it to you, dear reader, to conclude whether this is the sort of production one should expect for more than $12 million in cap hit.

The Lightning have seen fit to add a number of defensemen, too. Andrej Meszaros, Lukas Krajicek, Marek Malik, Matt Carle…oops, Steve Eminger. If you’re looking for investment opportunities, think about companies that make revolving doors. Tampa seems intent on doing what it can to keep those firms going. As a group, the defense might be maligned in some quarters, but no Lightning defenseman having played more than half of their games has a minus record. Only Paul Ranger has as bad as an “even” record.

But the story for this game will be the return of former Caps Eminger, Matt Pettinger, and Olaf Kolzig. Eminger and Pettinger have played only a total of three games between them for the Lightning as in-season pick ups. However, Kolzig was signed in the off season to a one-year deal ($2.5 million) to serve as Mike Smith’s backup and mentor. Kolzig, who seems likely to get the nod on Monday, has performed well in his own right. In three games, he is 1-1-1, 2,67, .925. His performance in each of the games he’s played – against the Rangers, Sabres, and Islanders – serves as a possible indicator of what to expect on Monday night. Against the Rangers and Sabres – two teams with a combined record of 19-8-4 – Kolzig stopped 66 of 70 shots (.943 save percentage) in posting a win and a loss. Against the Islanders, he gave up four goals on 36 shots, the last of which came in overtime after he badly misplayed the puck behind his own net.

The top overall pick of the 2008 amateur draft has found the early games of his career somewhat difficult. Stamkos is 2-2-4, -3, in 13 games. However, aside from a 2-1-3, +2 effort against Buffalo, he is 0-1-1, -5 in 12 other games. The Calder favorite is tied for 22nd among rookie scorers, but it hasn’t been a product of shyness. He is tied for the lead among rookies in shots taken (although his total of 30 would be tied for 127th in the league).

Steckel has seven goals in 89 career games in the NHL. Four of them have come at the expense of the Lightning in seven career games. He was 3-3-6, +3, in the last three games he played against the Lightning last year. But he’s in this as much to keep a sputtering Tampa Bay offense (2.15 goals a game) sputtering some more. As a defensive specialist, he would likely get a chance to skate against Vincent Lecavalier. Steckel could be important to stopping Lecavalier and his teammates when they have the puck, and in keeping them from getting it in the first place. Despite his considerable skills, Lecavalier is not an especially gifted faceoff man. Steckel has won 56.5 percent of his 108 draws taken.

The Caps were 6-2-0 against the Lightning last year, including 5-0-0 in their last five meetings. However, four of those wins were of the one-goal variety, so even last year, the differences between the clubs wasn’t all that stark. Tampa is, at least on paper, a better team than last year, and they have players with more than a little incentive to renew acquaintances in a special way. But the Caps appear to be emerging from the 2-3-2 funk they were in from October 18th – November 4th. And, they’re doing it with defense and goaltending (four goals allowed in the last three games). That’s a recipe for an unfriendly homecoming for Olie the Goalie…

Oh, the injustice! One commentator's indignation over last night's events...

"The Caps were engaged from the outset, crashing both the net and the netminder with impunity..."

"It was Michael Nylander early who landed atop Lundqvist, and it was Alexander Semin later who barreled into him, an act egregious enough to prompt the goaltender to chase referee Dan Marouelli when no call was made."

"It did not help when Tom Poti scored the 2-0 goal less than a half-minute after Semin had crushed the King on his crown, sending the puck into the net after one of the pegs had come off its moorings. The decision by video review in Toronto to allow the goal to stand was as questionable as Marouelli's decision not to penalize Semin."

No one does "we wuz robbed" like Larry Brooks.
Posted by The Peerless at 7:43 AM 5 comments: