The Peerless Prognosticator is ON THE AIR!!! -- Game 76: Flyers at Capitals, March 24th

Washington Capitals take to the ice on Sunday afternoon in the third game of their four-game home stand, hosting the Philadelphia Flyers in the last game of their season series.  The Caps come into the game having lost each of the first two games of the home stand, a 5-4 overtime loss to the Tampa Bay Lightning on Wednesday night and a 2-1 loss to the Minnesota Wild on Friday night.

The Flyers will be going into this game as the back half of a back-to-back set of games, following up on their Saturday afternoon contest at home against the New York Islanders.  They are in desperation mode, going into the Islander game five points out of a playoff spot with eight games left to play.  Despite the desperate straits in which the Flyers find themselves, they are just 8-6-1 in their last 15 games, a record that has allowed them to pick up only one point over that span on the team immediately in front of them, the Montreal Canadiens.

And if the Flyers are going to make a bigger dent in their deficit, they are going to have to defend better.  Despite allowing 49 goals over those 15 games (3.27 per game), the issue is not goaltending.  Over the last 15 games, the three goalies to dress for the team – Brian Elliott, Carter Hart, and Cam Talbot – have had a tightly grouped save percentage, ranging from .913 (Elliott) to .918 (Talbot) and a respectable .915 in the aggregate.

Hart seems to have regained his swagger after spending some time out of the lineup with an injury and then struggling against the Caps in his return on March 14th (27 saves on 31 shots in a 5-2 loss).  In his last three games, he has stopped 114 of 118 shots (.966), but that shot total is indicative of the problem – 39.0 shots faced per 60 minutes.  But these last three games for Hart have not been all that unusual.  Through Friday’s games, there were 49 instances this season of a rookie goaltender facing at least 30 shots and logging a save percentage of .940 or better while playing at least 50 minutes.  Hart has 11 of those instances.  No other rookie goalie has more than eight (New Jersey’s MacKenzie Blackwood).  If he gets the call, this will be Hart’s second career game against the Caps.

Claude Giroux has had a lot of success lately spreading the puck around.  He has 15 assists in his last 15 games (18 points overall, tied for the team lead in that span).  Only five players have more assists since February 18th, when that 15-game run started, and only Edmonton’s Connor McDavid has more (18) in fewer games (13).  It is not surprising, given that Giroux is second on the franchise list of assist leaders (522, trailing only Bobby Clarke’s 852), and he is 12th in that category among active players.  However, he is about to climb a rung on the all-time Flyer list of goal scorers.  His next one will be his 235th career goal, tying him for 10th place with Rod Brind’Amour.  His next point will give him 80 for the season, making it his fourth career season with 80 or more points.  Coupled with the 102 points he recorded in last year’s career season, he has 181 points over the last two seasons, fifth in the NHL, trailing Sidney Crosby by one point for fourth place through Friday’s games.  Giroux is 20-20-40, plus-6, in 40 career games against the Capitals.

If the Flyers are going to have a late surge, they will need more secondary scoring, and that shines a light on forward Ryan Hartman.  Obtained from Nashville with a fourth-round 2020 draft pick for Wayne Simmonds at the trading deadline, his production has been somewhat disappointing.  Not nearly as much as Simmonds’ performance with the Predators to date (1-1-2 in ten games), but underwhelming nonetheless (1-2-3, minus-4, in 11 games through Friday).  Hartman has not been a top-shelf scorer in his five NHL seasons, but he was on a pace to make a run at his third straight 30-point season in what would be his third full NHL season before the trade. 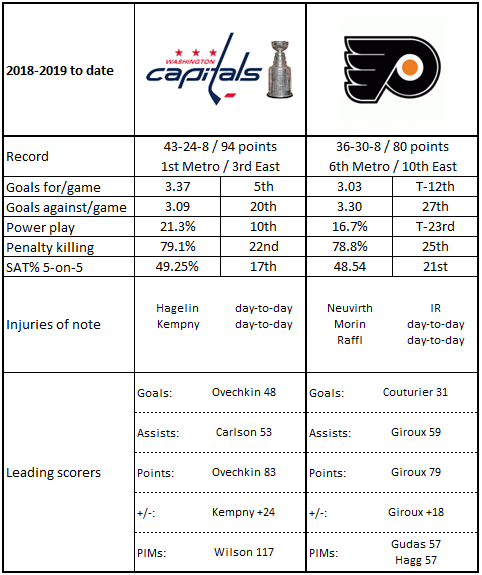 1.  The Flyers have been one of those teams whose performance aligns with production on defense. They rank 27th in scoring defense (3.30 goals against per game) and rank 21st in shot attempts-for percentage at 5-on-5 (48.54).

2.  It is hardly surprising in that context that seven of the eight defensemen to dress for the Flyers this season are at or below 50 percent in individual shot attempts-for percentages at fives.

1.  Even with the 2-1 loss to Minnesota on Friday night, the Caps have only five one-goal losses in regulation this season.  Only two teams have fewer: San Jose (three) and Tampa Bay (two).

4.  Washington has not lost consecutive games on home ice since January 14th and 18th against St. Louis and the New York Islanders.

5.  The one goal that the Caps scored against the Wild on Friday night was their lowest offensive output on home ice and the first time they scored fewer than three goals since they were shut out, 1-0, by Boston on February 3rd.  The Caps had scored 40 goals over nine home games until Friday.

In the Flyers’ 8-6-1 run of late, they do not have a single point from a defenseman on the power play.  Given that Shayne Gostisbehere averaged 2:58 with the man advantage, more than the combined power play ice time averages of the other six defensemen to dress over that stretch (2:25), his performance stands out.  In fact, he has not had a power play point since recording a pair of assists in a 5-4 win at Minnesota on February 12th, his streak now at 17 games.  There might be another number of more concern for the Flyers: 20.  It seems more ice time is not better ice time for Gostisbehere and the Flyers.  In the 38 games in which he skated at least 20 minutes this season, Philadelphia is 12-22-4, but they are 21-8-4 in the 33 games he skated less than 20 minutes.  He has been scoring points overall lately, going 2-15-17, plus-1, in his last 24 games, while averaging 18:46 in that span and logging more than 20 minutes 11 times (the Flyers being 4-6-1 in those games).  Gostisbehere is 1-7-8, plus-3, in 14 career games against the Caps.

When Alex Ovechkin takes the ice on Sunday afternoon, it will have been 40 days since his last goal on home ice.  Not that the Caps have spent a lot of time at home since Ovechkin had a goal in the Caps’ 6-4 win over the Los Angeles Kings on February 11th, but it is six games and counting for Ovechkin without a goal at home, tied with his longest streak of this season, one that straddled the 2018 and 2019 portions of the season.  In fact, that goal against the Kings is his only goal on home ice since he had a hat trick against San Jose on January 22nd, a span of 11 home games with that single goal.  He has mitigated that dry spell with a fair number of assists (11 in those 11 games since facing the Sharks), but it is odd given that Ovechkin has 327 goals scored on home ice in his career. Only 17 players in the league have more total goals scored than that home total since Ovechkin came into the league in 2005-2006. If Ovechkin is going to break out, it could be against this team.  He has 34 career goals against the Flyers, more than any player since he came into the league but one (Sidney Crosby has 41 goals in 15 more games played against the Flyers than Ovechkin).  Overall, he is 34-24-58, minus-6, in 52 games against Philadelphia.

The Caps will start their Sunday in first place in the Metropolitan Division, but pending the results for the New York Islanders in a back-to-back set of games Saturday and Sunday, they might not finish the day in first place.  And, if the Penguins beat Dallas on Saturday, the weekend could come to a close with the Islanders, Caps, and Penguins separated by two standings points (in that order).  Winning would take care of that scenario for the Caps, who if they do beat the Flyers would hold, at worst, a one-point lead on the Islanders and three on the Penguins with all three teams having six games remaining.  NASCAR should hope for such finishes.