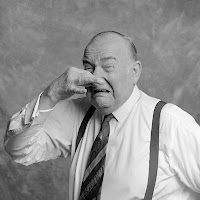 It was a team effort.

On a night when Brent Johnson was the most effective Cap, that’s about the best you can say about a 5-0 loss to the Buffalo Sabres in which the Caps were never competitive…at all…ever…in 60 minutes of, well, play (I guess).

Johnson was the one on the end of the bench in the baseball cap.

You’d like to think that this loss was just a stinker, but you know, this is getting to be a concern. That’s 13 goals allowed in the last three games and the fourth time in ten games this year that the Caps have allowed five or more goals. This is not, by any measure you’d care to use, as much as a competent defensive team. They’re bad, and there isn’t any way to sugar coat that. From the goaltender out, they are a poor defensive team. Tonight was no exeception…

Twice, the Sabres scored in the last minute of regulation. In 30 periods of regulation play so far this season, the Caps have surrendered a goal in the first or last minute of eight of them. That’s eight goals of the 33 that the Caps have surrendered. It’s happened five times in nine periods in the last three games. That’s just a lack of attention. Keep that up, and there won’t be any “rocking the red” in April.

Of course, giving up goals in the last minute of play has its complement – Thomas Vanek (did the Caps not cover this guy in the pre-game meetings?) scored on the first shot of the game.

Only two skaters – John Erskine and David Steckel – stayed out of the minus column. Even Shaone Morrisonn (who left with an injury after only 6:03 of playing time) managed to finish with a -1.

The Caps just yielded too much of the ice to the Sabres. The five goals were scored from a combined total of 61 feet. That wasn’t as much a case of a lack of physicality in close as it was just not covering or keeping up with guys.

Here is another indicator of that…the Caps had only seven blocked shots. No one was close enough to a Sabre to get in the way; there were just too many rushes and open looks.

Of the 29 shots the Caps took, 16 of them were from above the circles. Any wonder why Ryan Miller pitched a shutout?

The Caps are 0-3-1 in games in which they score fewer than four goals. That’s an indicator that goalies aren’t stealing any games. Of course, the only way a goalie steals a game when his team doesn’t score is in a Gimmick. But if the Caps have to score four to win on a nightly basis…well, like we said, there won’t be any “rocking the red” in April.

We’re convinced…Nicklas Backstrom has an injury. That has to be it.

Oh, let’s just say it…the top line was awful tonight. No points, four shots (three by Backstrom), -3. If Ovechkin is that important, he shouldn’t win a Hart, he should get a Nobel Prize for Hockey.

It’s the fourth time in ten games that the Caps have had to kill off at least seven shorthanded situations (the number tonight was eight). That’s just too much time expending a lot of energy and getting out of the substitution rhythm.

Here’s an example of balance. The teams were relatively even in shots (Washington led, 29-27), but while the Caps had a total of 11 skaters taking shots, the Sabres had nine with multiple shots, none with more than four. Buffalo played its game, the Caps did not.

There were 56 faceoffs in the game. Derek Roy took 25 of them for the Sabres (he won 13, the only Sabre to win a majority of his draws). That just strikes us as an odd result.

And here is your bedtime stat…since the lockout, of the 24 teams making the playoffs out of the Eastern Conference only five have won fewer than 20 road games. Only one – the Tampa Bay Lightning in 2005-2006 – finished the season with a below-.500 road record. The Caps are 2-4-0 away from Verizon Center.

Posted by The Peerless at 10:55 PM No comments:

Email ThisBlogThis!Share to TwitterShare to FacebookShare to Pinterest
Labels: postgame

The Peerless Prognosticator is ON THE AIR!!! -- Caps vs. Sabres, November 1st

We are live here at Peerless Central with the last prognostication you’ll ever need on tonight’s tilt between the Capitals and the Buffalo Sabres at Home of the Sabres Bitching Center Arena. To look at some Buffalo sites, you’d think the Sabres were the bottom feeders of the NHL…

“Pominville, Roy off to Slow Starts”

“It seems like when we get home we try to make that extra play, try to make it a little too cute and it ends up costing us.”

-- Lindy Ruff, after a loss to the Lightning Thursday night

Well, if it isn’t Cheerless…hey cousin, I haven’t seen you since…

“Yeah, since you had us do those infernal previews. Where’s that beer you promised?

Uh, it’s in the mail. What are you doing here?

“You know me…’Cheerless’ an ‘ all that. Well, what more cheerless place is there than Buffalo?”

What do you mean, cuz?

“I was reading that Buffalo.com site?...and whaddya think they’re talking about on their ‘Let’s Talk’ column?...

”Take a deep breath, or time to panic? Everything seemed so nice a few weeks ago. As recently as Oct. 23, the Buffalo Bills were 5-1 and memories of the Arizona massacre were already dim thanks to a nice performance against the stumbling San Diego Chargers, and the Sabres were 6-0-1 after a miraculous win in Minnesota. Since that fateful Thursday, however, our hometown teams have combined for zero wins and 4 losses - including embarrassing missteps to the Miami Dolphins and Ottawa Senators, two of local sports fans' most hated rivals.”

I see your point…but let’s focus, shall we, on the Sabres, who did start 6-0-1, but who are 0-2-1 in their three games to close out the month of October. Overall, where to the contestants rank?... 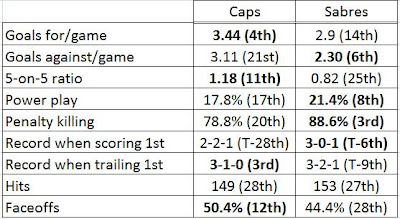 First, we put those hits up there as an indicator that this isn’t likely to be a rock ‘em-sock ‘em sort of game. There is likely to be an up and down aspect to it that could be of advantage to the Caps, since their shot differential (5.4 shots-per-game to the good) is much greater than is Buffalo’s (-0.3 shots-per-game). Add that to the disparity in faceoffs won, and you would think one thing to look for is how well the Caps can tilt the rink toward Ryan Miller and the Sabres’ defense.

Apart from that, there is the matter of whose will can be imposed on the other. The Caps would like to make this a 5-on-5 game. Their goals for/goals against ratio at five-on-five is markedly better than is Buffalo’s. On the other hand, Buffalo clearly has the better special teams play, both when having a man advantage and when down a man.

The battle of wills also extends to who scores first. If the Sabres do, they usually win. If the Caps allow that first goal, they usually…win. The thing is, though, there is perhaps no more reliable indicator of which team will win an NHL game than looking at who scores first. 27 teams have a winning percentage of .500 or better when getting the first goal. Washington, it is worth noting, is one of the three teams not in that group.

Individually, a discussion of the Sabres might start with Thomas Vanek. The $50 million man (over seven years, as the Sabres matched an offer tendered by Edmonton last year) had something of a slump last year in the first year of his big contract. He dropped off by seven goals, 13 assists, and 20 points in finishing 36-28-64. The biggest drop of all was in his plus-minus number. After leading the league in that figure with a +47 in 2006-2007, he dropped off to a -5 last year that had him ahead of only Dmitri Kalinin and Maxim Afinogenov on his own team. It suggested that perhaps he was less his own talent and perhaps more of who he was surrounded by in 2006-2007 (Daniel Briere and Chris Drury having left Buffalo last year in free agency).

On the other side is Derek Roy. Perhaps no other player emerged from under the shadow of the departed Briere and Drury for the Sabres last year than did Roy. He improved his scoring from 21-42-63 in 2006-2007 to a 32-49-81 mark last year, getting an additional 2:31 of ice time a night. This year, Roy is leading all Sabre forwards in ice time per game (2:32 more than last year and more than five minutes more than two seasons ago), but he’s struggled. His 1-4-5 is good for only seventh in scoring on the team; his only goal an overtime game winner against Minnesota.

At the other end of the ice, the Sabres are characterized by a balanced, mobile blue line. There is no real big hitter there, no top scorer, and none of the group emerges when there is a discussion of best-in-the-NHL candidates. But Jaroslav Spacek, Teppo Numminen, Tony Lydman, and Henrik Tallinder are all solid two way players. To that group was added Craig Rivet, presumably as a defensive anchor. However, Rivet had arthroscopic knee surgery recently and is out for this one.

The other addition is intriguing. Andrej Sekera, who played in 37 games as a rookie with the Sabres last year, leads the Sabres in ice time this year. The trouble, perhaps, for the Sabres, is that in doing so, he’s been a minus player in six of his ten games and five of his last six. Not to say he’s the cause of such a result, but he’s been in the vicinity. One would think that if Rivet was in the lineup, Sekera would not be getting that amount of work (averaging almost 27 minutes a game since Rivet went out).

The last line of defense for the Sabres is goalie Ryan Miller. Miller is staking an early claim to be considered among the league’s top goalies. He is fourth in the league in goals against (2.07), tied for sixth in save percentage (.928), and brings a record of 5-1-1 into this game. He did, however, lay an egg in allowing five goals on the first 30 shots he faced in a 5-2 loss to Tampa Bay on Thursday. His numbers against Washington are not as bright – 2.75 GAA and .900 save percentage, but he does have a 7-2-0 record in ten career appearances against Washington.

Laich is likely to open on the left side of the top line, replacing Alex Ovechkin. Although Laich has only a single goal in his last seven games, his importance here might not be in scoring as much as it will be doing the dirty work to get the puck to Nicklas Backstrom and Viktor Kozlov. If he can pick up the garbage in front, all the better. Given that Buffalo doesn’t, as a rule, have an especially physical defense, he might get opportunities in that area.

The Caps haven’t yet righted the ship after losing the first two games of the western road swing – their two wins have been shaky, to say the least. But they’ve found a way to scratch out extra points in both in extra time. That seems to be the formula for the moment, and in a hostile place that has been unkind to them lately (the Caps are 3-7 over the last five seasons in Buffalo), they’ll have to have their sandpaper out to scrape one out.