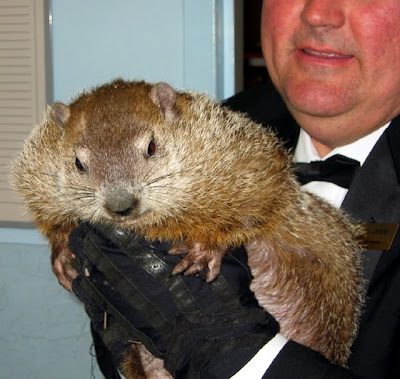 Predicts four more months of Caps winning
Posted by The Peerless at 7:25 AM 2 comments:

The Peerless Prognosticator is ON THE AIR!!! -- Caps vs. Bruins, February 2nd

The Caps head north tonight to try to add another win to their recent pleasantness as they travel through Lexington and Concord, to Boston to take on the Bruins for the first time since defeating them, 4-1, on opening night. They will do so proud to claim January’s NHL Player of the Month, the Captain, Alex Ovechkin…

"It is a very great mistake to imagine that the object of loyalty is the authority and interest of one individual man, however dignified by the applause or enriched by the success of popular actions."

“The Capitals have many leaders.”

“You’ve probably entertained the likeness of my visage in the sale of goods.” 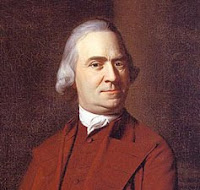 “I thankee for the sentiment… I have tried to abide by the precept that He therefore is the truest friend to the liberty of his country who tries most to promote its virtue.”

Yeah, well, we hockey fans do consider beer a virtue.

And who is that?

“That? That would be Revere, besotted again… ‘tis a wonder how he stays upon his steed.”

How would he know the Capitals were coming? Doesn’t there have to be that whole “one if by land, two if by sea” thing?

“A falsehood, sir. Entirely a falsehood. I shall share a secret with thee…”

“There never were any ‘two if by sea.' Revere was so fluthered, he saw very much two of everything…”

Well, what the Boston Bruins are going to get this evening are two NHL “stars” – Alex Ovechkin (NHL first star of the month for January) and Nicklas Backstrom (NHL third star for last week). And what the Bruins are also getting is lower and lower in the standings, a product of their having gone 0-5-2 in their last seven games, 1-8-2 in their last 11, and 3-9-2 for the month of January. 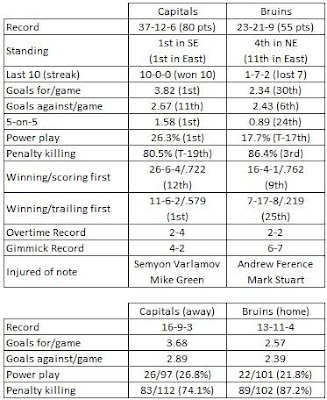 The Bruins are having a devil of a time getting goals. In 14 games in January they managed more than three goals only once and more than two goals only three times. 26 goals for the month (1.86/game) has put a lot of pressure on Boston’s goaltending. Last year’s Vezina Trophy winner – Tim Thomas – has had an inconsistent month, certainly not at the level of last year’s Vezina-worthy production. For January Thomas was 3-5-2, 2.74, .909 and was relieved three times. He hasn’t won a game since January 14th (the last win for the Bruins). His five consecutive decisions without a win is his longest such streak this year and his longest since he closed the 2006-2007 season with seven consecutive losses. With his loss to the Capitals on opening night this season, Thomas is 9-3-2, 2.58, with one shutout for his career against the Caps.

If it isn’t Thomas, it will be Tuukka Rask. And if Thomas had a difficult month, Rask’s was one to burn the tapes of. In seven appearances for the month he had only four decisions. On three other occasions he came on in relief of Thomas. Overall he was 0-4-0, 2.96, .896 for the month. He has never faced the Capitals.

It doesn’t take an American revolutionary to figure out where Boston’s problems lie. They can’t score. Looking at their top five scorers for the year, here is how bleak it was in January…

The Bruins have only one 30-point scorer for the season (Bergeron, 12-21-33), and only Marco Sturm has more than a dozen goals. He missed half a dozen games in January, too.

Savard missed eight games to a knee injury in January, and that comes after sustaining a broken foot in October. He has dressed for only 30 games this year in what is a disappointing season after putting up 88 points last year and not missing a game. In two games since coming back from the knee injury he has an assist in each game. He might be getting back into a groove he was settling into in late December when he had a five-game points streak (1-7-8). The Bruins desperately need it. He has had quite a bit of success against the Caps – 9-38-47 in 36 career games against the Caps.

Theodore had a rather spectacular January – 8-1-0, 2.28, .930. But he has been something of a hard-luck Harry against the Bruins in his career. Despite a 2.49 GAA, a .918 save percentage, and two shutouts, Theodore has only an 11-12-3 lifetime win-loss record against the Bruins. For this one, he is facing a goal-challenged club that is getting desperate the lower it sinks in the standings. He’s been sharp. He’s been consistent. Now the trick is to keep it going.

1. No mercy. The Bruins can’t score and are pop-gunning their power play. So give them no chances to feel good about themselves. No softies, no dumb penalties, bear down on the PK if you do take penalties…pretty much the basics.

2. No press clippings. The Caps have won ten in a row. The Caps are playing good defense. The Caps are rising in the power rankings. Crumble up all that press and toss it.

3. Mark Marco. Marco Sturm leads the Bruins in goals (16). Since the lockout he is 5-3-8 in 12 games against the Caps (scoreless in the loss to Washington in October). And, 11 of his 16 goals have come in wins. Keep him off the score sheet.

In the end, the Caps are catching something of a break here. The Bruins aren’t getting offense from anywhere, and Tim Thomas is not at the top of his game. That is not to say that this is a walk-over game. The Bruins are not as good as their results from last year suggest, but neither are they as bad as they were in January. What they have become is one of those desperate teams that can make life difficult for a team like the Caps if they are not taken seriously. So…take them seriously.