The winning week string came to an end for the Washington Capitals in Week 5.  It was less a systemic problem that led to the result as it was something individuals and teams go through over the course of a long season – a slump. 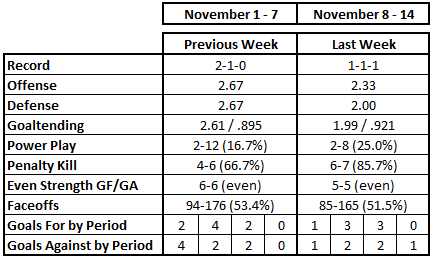 At least it was not a losing week, standings points wise. The Caps still have yet to have a losing week since Week 25 (the penultimate week) last season.  They failed to win consecutive games on the road, dropping a 1-0 decision in Detroit and offsetting that with a 5-2 win in Philadelphia.  It was their second straight split of a two-game road trip since sweeping their three-game western Canada trip in October.  The disappointment was the home game in the Week 5 schedule, a 3-2 overtime loss to the team that was, at the time, the worst team in the Western Conference, the Calgary Flames.  What made that loss harder to swallow was that the Caps were one of the better home teams in the East.  As it was, they finished the week with the third best home record in the Eastern Conference (6-2-1).

Did someone say, “slump?” Here is where the Caps came up short this week.  Sure, they pounded the woeful Flyers, 5-2, in the middle game of the week, but the Flyers’ defense is, to be charitable, a work in progress, and their goalie was making his first appearance after a ten-day absence.  In the other games, the Caps were shutout by a “1-A” goalie (a good one, but not a consistent number one performer in Detroit’s Petr Mrazek) and had to scramble to score a pair of late goals against a lower-tier goalie, Calgary’s Karri Ramo.

The scoring at an individual level reflected the offensive slump. The seven goals were spread among six different players.  The one Capital with two goals was grind-liner Jason Chimera (both against the Flyers).  He was not the only one who lit the lamp.  Jay Beagle and Michael Latta has goals in Week 5.  Tom Wilson had a pair of assists.  Brooks Laich had a helper, and so on.  Among the scoring liners, T.J. Oshie, Justin Williams, and Nicklas Backstrom had goals; Evgeny Kuznetsov had a pair of assists.

The meaningful number as far as the offense went is “zero.”  Alex Ovechkin did not record a point.  It was not for lack of trying.  He had 15 shots on goal against the Red Wings without finding the back of the net, the first time in almost half a century a player recorded that many shots on goal without scoring.  He had 20 shots on goal for the week and 28 shot attempts without recording a point in his continuing pursuit of the NHL record for goals scored by a Russian-born player.  He remains tied with Sergei Fedorov at 483 goals.

The Caps started the week having allowed the fewest shots on goal per game in the league and finished the week second in that regard after allowing 76 shots on goal in three games.  It is part of a long string of games that point to an identity for this team.  The Caps have played 14 consecutive games without allowing a team more than 30 shots on goal.  Only Columbus during that streak – in the seventh game of this streak – reached the 30 shot mark.

This is a team that is establishing itself as a solid, perhaps elite possession team.  They finished the week third in Corsi-for percentage at 5-on-5 (54.4), largely on having the second-best Corsi-against per 60 minutes (47.1/60, second to New Jersey’s 45.5/60).  This could be a product of the notion that the best defense is a good offense, but however you slice it, the Caps are quite stingy in allowing opponents offensive opportunities.  The odd part about possession for Week 5, though, was the close-score situation numbers at 5-on-5.  They dominated, as one might have expected, the possession numbers against Philadelphia (57.4 Corsi-for percent) and Calgary (52.5).  However, the Detroit game represented their third-worst performance of the season in this area (40.0; numbers from war-on-ice.com).

Week 5 was a very good week in net.  It would have been even better if Calgary had not scored on their second shot of overtime to take away a 3-2 win.  Not that Philipp Grubauer had a bad game in spelling Braden Holtby in the second of a back-to-back set of games.  He did not.  In fact, he was the victim of some uncharacteristically iffy play in front of him, the Flames scoring their two goals in regulation from between the faceoff circles, prime real estate for scorers.

As for Holtby, he had another solid week.  His 18 saves on 20 shots against the Flyers was a solid, if unspectacular effort, but his performance against Detroit was a fine one, save for one moment.  He allowed his only goal in that game on a shot from just outside the goal line extended from his right by Andreas Athanasiou, the only goal he allowed on 27 shots.  It was almost a year to the day since he dropped the other 1-0 regulation time decision of his career, at home to the New Jersey Devils on November 14, 2014.  That one also featured an iffy third period goal, when his attempted pass from behind his own net was put right onto the stick of Mike Cammalleri, who one-timed it in for the game’s only goal.

It was an efficient week, especially when you account for one big hole, but one was left wondering if it was sustainable.  The Caps recorded two goals on 18 shots in 12:40 of power play ice time (1.42 shots per minute).  Of those numbers, Alex Ovechkin was 0-for-9 shooting in 10:58 of power play time.  He had eight of those power play shots (of the 11 total) against Detroit in the 1-0 loss on Tuesday.

At the other end of the efficiency divide was Jason Chimera, who recorded two power play goals on three power play shots in 2:03 of ice time.  He was inserted into the middle of the 1-3-1 to get more energy and activity in front of the opposition goalie.

Ovechkin taking a donut for the week (he has one power play goal this season), Jason Chimera as many power play goals as he had over his previous four seasons combined.  Going 2-for-8 is nice, but it might not be the way this team goes about getting there consistently on a week-to-week basis. 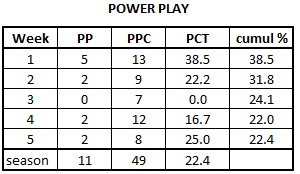 The most effective penalty kill is the penalty you don’t have to kill.  Week 5 was another example of this for the Caps.  The Caps’ four-week string of progressively fewer shorthanded situations faced ended in Week 5 with facing seven (after facing six in Week 4), but it is still a fine number.  The Caps have faced the fourth-fewest shorthanded situations in the league to date (46 in 16 games), and even with the one goal allowed have yielded the second fewest power play goals in the league (7 – Anaheim has allowed 6).

Even the goal was a bit of bad luck, a shot by the Flyers’ Claude Giroux hitting the far post and caroming in against Braden Holtby in the Caps’ 5-2 win.  It was an otherwise efficient week, the Caps allowing only seven shots in 11:25 of shorthanded ice time (0.61 shots per minute). 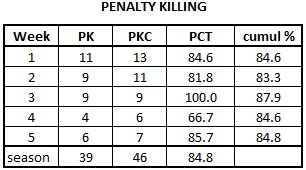 It was a low scoring week overall and no less so than at even and full strength.  This is where the scoring line players for the Caps made a mark.  T.J. Oshie and Nicklas Backstom scored their goals for the week at 5-on-5, both in the 5-2 win against the Flyers.  But there was also the input from the bottom six.  Justin Williams, skating on a line with Jay Beagle and Jason Chimera, scored against the Flyers.  Beagle got one of his own against Calgary, the game-tying goal to send the game to overtime as it turned out , and Michael Latta scored the first goal for the Caps against the Flames. For Latta it was his first goal of the season and his first since recording his first NHL goal in a 4-3 win at Detroit on November 15, 2013.

There is better than 50 percent, and there is better than 50 percent…but.  For the Caps in Week 5, the latter was operative.  Overall, the Caps finished at 51.5 percent for the week, but that was the product of a 64.9 percent winning percentage in the neutral zone.  They were under 45 percent in the ends – 44.2 percent in the offensive zone and 44.6 percent in the defensive zone.  It was just as problematic on an individual level.  Eight Caps took more than ten draws for the week and of the eight scoring zone results among them, only Jay Beagle’s 62.5 percent (10-for-16) in the defensive zone was over 50 percent.  Beagle did finish the week at 50 percent or better in all three zones, but Nicklas Backstrom had a rough week.  His offensive/defensive zone performance of 26.9 percent (7-for-26 combined) was one he might like to forget. 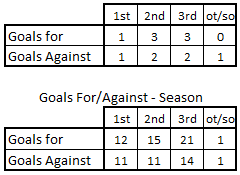 The Caps won the late show for the week, outscoring opponents by a 3-2 margin in both the second and third periods.  However, one of those third period goals was the only goal scored in the 1-0 loss in Detroit, and there was that overtime goal that was the margin in the 3-2 loss to Calgary.  In that respect, the Caps had an uncharacteristically unpleasant late-game performance for the week.  The Caps are still a plus-4 in the second periods of games for the season and a plus-7 in the third periods of games.

Maybe Week 5 was spent paying too much attention to getting a teammate a record.  Alex Ovechkin did not set that record for career goals by a Russian-born player, and the team didn’t make up for the absence of his contributions at the offensive end.  Perhaps it says something about the team that despite a lot of fair-to-poor results among individual players and the team as a whole on offense, they still managed to squeak through with a .500 week in standings points.  If there is one thing being a dominant possession team can do for you, it is keep you in games when the pucks aren’t going in.  That (the Detroit game aside) is what allowed the Caps to limit the damage to a win and two one-goal losses.

Posted by The Peerless at 11:08 AM No comments: