“'Age' is the acceptance of a term of years. But maturity is the glory of years.”
-- Martha Graham

Zdeno Chara finished the 2020-2021 regular season as the oldest player in the league, at 44 years old being more than two years older than the Toronto Maple Leafs’ Joe Thornton.  There have been 2,703 skaters to appear in at least one NHL game since Chara was born in Trencin, Czechoslovakia, on March 18, 1977; 201 skaters to dress for at least one NHL game were born after Chara appeared in his first NHL game on November 19, 1997.  But over 1,553 regular season games with three teams over 22 seasons before coming to Washington, Chara – a third-round draft pick (56th overall) by the New York Islanders in 1996 – built a hall of fame worthy career.  And when the Boston Bruins, with whom he built most of that legendary career over 14 seasons, all of which he served as captain, decided to go younger and ask him to take a reduced role, he went the free agent route and accepted an offer by the Caps for a one-year/$795,000 contract last December.

While his top end numbers (2-8-10, plus-5) were not especially impressive, and his even strength on-ice goal differential was similarly unremarkable, but signing Chara was not about numbers that, frankly, have been in decline in recent years.  The Caps got a three-time first team NHL all star, a six-time Norris Trophy finalist (and winner in 2008-2009), a six-time All-Star Game participant, a Messier Leadership Award, and a Stanley Cup championship (2011).  He brought the kind of resume that commands respect and attention in the locker room, and he had the depth of experience and success that could be helpful to young and veteran players alike.  He brought the very “intangibles,” the attributes so difficult to quantify, that any team would consider a benefit. 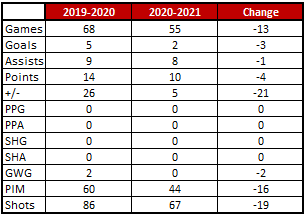 Fearless’ Take… Chara had a strange year as far as ice time goes.  It’s one thing for essentially a third-pair defenseman to have high time values when his team is successful, but boy.  The Caps were 33-5-4 in 42 games in which he skated at least 17:08, 3-9-1 in the 13 games he skated less than that amount.  Then there was an odd thing about his shots on goal.  Chara, while not generally thought of as an elite offensive defenseman, is not the player he was at that end of the ice, but quiet nights didn’t seem to hurt.  In 18 games in which he did not record a shot on goal, the Caps were 13-3-2.

Cheerless’ Take… If might qualify as an “odd fact, “ but while Zdeno Chara had only ten points this season, he had at least one against every Caps opponent except New Jersey.  New Jersey?  Yeah…New Jersey.  And he had more shots on goal against he Devils (11) than he had against any other opponent. It is also worth noting that his ice time decreased by month, too – 20:32 in nine January games, 18:33 in 12 February games, 17:41 in 14 March games, and 17:31 in 14 April games before ticking up to 17:55 in six games in May.

Odd Chara Fact II… Chara has got to play somewhere in the NHL next season.  He just can’t go into retirement with “666” career points.

Odd Chara Fact… If he does go into retirement, he will end his career with one round number on his resume – precisely 2,000 career penalty minutes.

A first goal is memorable, whether a rookie’s first NHL tally or a 43-year old’s first with a new team.  The latter refers, of course, to Zdeno Chara, who recorded his first goal as a Capital in a late-January game against the New York Islanders.  Chara got off to a slow start in the offensive end, going 0-1-1 in his first seven games but posting a plus-5 rating to help push the Caps to a 4-0-3 record to open the season.  When the Islanders came to town in late January, they were rude guests, getting out to a 3-0 lead in the first period.  But after being frustrated for the first nine minutes of the second period, the Caps erupted. Conor Sheary scored at the 9:07 mark and scored again just 73 seconds later (assisted by Chara) to get the Caps within a goal.  Garnet Hathaway scored 51 seconds after Sheary’s second goal to tie the game, and then John Carlson scored on a power play barely three minutes after Hathaway to give the Caps the lead.  And then Chara gave the fans and his teammates something special to celebrate…


The goal was Chara’s first as a Capital, becoming the 126th defenseman in team history to record a goal for the Caps (Nick Jensen and Trevor van Riemsdyk would score their first goals as Capitals later in the season to bring the total to 128 defensemen in team history with goals).  Chara’s second, and last goal of the season, would be memorable as well, coming as it did two games later against his old Boston Bruins club, but unfortunately, while his was the first goal of the game, and the Caps shot out to a 3-0 lead before the game reached the half-way mark, he and the Caps would lose that game to Boston, 5-3.

In 78 previous career games against the Philadelphia Flyers, Chara had a respectably line – 17-28-45, plus-3.  In fact, of all the opponents he faced to that point, he recorded more goals only against the Pittsburgh Penguins (18 in 82 career games).  But the first of a back-to-back set of games in Philadelphia in early May would be forgettable in a literal sense of the word.  There was just nothing there to remember.  He skated just 15:27, the fifth-lowest ice time of his season.  He had no shots on goal and only one shot attempt (blocked) in 19 shifts, tied for the third fewest shifts he skated for the season.  His only other line on his score sheet was a blocked shot.  He was, however, on ice for two of the Flyers’ four goals scored in a 4-2 loss to Philadelphia.

Postseason… For the first time in 16 trips to the postseason, Chara failed to record a point (0-0-0 in five games).  And, his average ice time per game of 16:16 was, by far, the lowest of his career, only the second time he averaged less than 21 minutes per game (19:47 per game in 2020 with Boston was his previous low).  He was, however, one of only four Capitals (and the only defenseman) with an on-ice even strength goal differential in positive territory (plus-1).  He and Nick Jensen were on ice for fewest even strength goals scored against (two apiece), perhaps a product of getting third pair minutes and responsibilities, but still a respectable number.

Looking ahead… It is hard to envision Chara returning to the Caps with left-handed defensemen (as is Chara) Michal Kempny perhaps returning after losing this season to injury and Martin Fehervary knocking at the door of the parent roster after spending his apprenticeship in Hershey this season, and Trevor van Rimesdyk (a righty, but under a cap-friendly contract under $1.0 million per year for the next two seasons) showing promise in a limited role.  Then again, with more than 1,700 regular season and postseason games over 23 years on his resume, there is the possibility he will call it a career.

Quantifiable data are valuable in comparing players to one another under similar circumstances and against performance standards.  But non-quantifiable information – “intangibles,” if you will – can hint at value beyond numbers.  Zdeno Chara’s numbers were lacking in leaving an impression, especially when compared with his own history as an elite overall defenseman.  But his value in bringing out the better elements of Nick Jensen’s game and his work ethic as an example to teammates cannot and should not be dismissed as lacking value.  In an odd sort of way, his year spent with the Caps stands in contrast to the year missed by goaltender Henrik Lundqvist, who might have had a similar beneficial effect on the Caps’ young goaltending tandem of Ilya Samsonov and Vitek Vanecek but for his missing the season with a heart ailment.  Chara’s line on the statistical record of Capitals might not be long remembered, but his influence on teammates might have a more lasting effect.