“It's hard to lead a cavalry charge if you think you look funny on a horse.”
-- Adlai E. Stevenson

Sergei Fedorov, Matt Cooke, Cristobal Huet, Eric Belanger, Dennis Wideman, Jason Arnott, Martin Erat. Those are some of the players acquired by the Washington Capitals over the years at the trading deadline to shore up weaknesses or fill holes on a roster trying to establish themselves for a deep post-season run.

This season it was Chris Brown, Dustin Penner, and Jaroslav Halak as the cavalry reinforcements acquired at the trading deadline as the Caps found themselves in the position of having to scramble from below just to make the playoffs.

Chris Brown took a rather roundabout way to Washington. A native of Flower Mound, TX, Brown spent time in the U.S. National Team Development Program.  Then, after being drafted in the second round by the Phoenix Coyotes in 2009, he spent three years at the University of Michigan.  Upon turning pro he was assigned to the Portland Pirates of the AHL, splitting time between Maine and Arizona with the Coyotes in 2012-2013.

Brown split time between Portland (51 games) and Phoenix (six games) this season as well, but when the trading deadline came, he packed his bags once more as part of a deal that sent unhappy winger Martin Erat to the Coyotes.

Brown’s activity was unremarkable.  In 9:42 of ice time per game (all of it at even strength) he had meager possession numbers: 39.0 Corsi-for percentage at 5-on-5 and a shots-for percentage of 38.9 at 5-on-5.  He might have been an improvement on John Mitchell, the AHLer who went west in the trade that brought Brown to Washington (he never dressed with the Caps), but for 2013-2014 not a large one.

Once upon a time, Dustin Penner was a forward with promise.  In his second season in the NHL, with the Mighty Ducks of Anaheim, Penner scored 29 goals for a Stanley Cup champion.  He was a 20-plus goal scorer in four of his first five full seasons in the league, including 32 goals with Edmonton in 2009-2010.  After the 2010-2011 season though (23 goals in 81 games with Edmonton and the Los Angeles Kings), his production fell off the table.  In 98 games over the next two seasons he had nine goals (and yes, another Stanley Cup).  He became known more for his adventures with breakfast fare than his exploits on the ice.

After signing with the Ducks before the start of this season – the plain old unmighty “Anaheim Ducks” -- his production rebounded somewhat with 13 goals and 32 points in 49 games.  It was not enough to keep him from being traded at the March deadline, though.  Moreover, he was obtained for a fourth-round pick.  Wait…what?  A guy who was scoring on a 22-32-54 pace per 82 games was traded for a mid-round draft pick?  On paper, it was a steal.

Yeah, well, it’s hard to skate on paper, although at times that looked like the medium on which Penner skated.  It did not help at all that then head coach Adam Oates was adamant that Penner play a limited role.  In 18 games with the Caps, Penner averaged 12:18 a game, his lowest ice time since his first year in the league when he averaged 11:58 in 19 games with the Mighty Ducks.  Even Martin Erat, who occupied another condominium in the Adam Oates Doghouse Estates, averaged 14 minutes a game.

The mix of new surroundings and lack of use made for a scoring line for Penner that was not all that distinguishable from that of Chris Brown: 1-2-3, plus-3, and the Caps were 8-6-4 in games in which Penner appeared.

Penner was something of a curiosity.  First, he was a left-handed shooter who played primarily on the right side in previous stops.  With the Caps that left-handed shot was going to be put on the left side.  It was the Capital Way.  OK, now who is over there on the left?  There was Marcus Johansson, who never saw a shot he didn’t like…to pass up, it seemed.  But he was going to be a top-six winger on this team.  Then there was newly arrived Evgeny Kuznetsov.  You would have thought that Kuznetsov would have been, at least on the proverbial paper, a top-six winger (he wasn’t).    Folks might have been disinclined to break Jason Chimera away from what was on many nights the Caps’ most effective line (with Eric Fehr and Joel Ward).

So, where did Penner fit?  Put him back on the right side?  The depth chart there was Alex Ovechkin-Troy Brouwer-Joel Ward.  There are fans out there who no doubt would say “stick him in Brouwer’s spot,” except Brouwer was in the midst of a career year in goals, more than a third of his year’s total scored after the trading deadline that brought Penner to the Caps.

The Caps needed centers or defensemen, got yet another winger who on paper looked like a steal, then put him in the equivalent of a lockbox on the second half of the forward lines.  His was as good an example as any of the dysfunctional relationship among needs assessment, player procurement, communications, and deployment that plagued this team this year.  The best thing that could be said of the Penner acquisition was that it cost next to nothing.

You can draw a bright line between comments attributed to then general manager George McPhee about the Capitals’ goaltending this season and the acquisition of Jaroslav Halak at the trading deadline.  During a national broadcast of the Caps’ 6-5 overtime win against the Detroit Red Wings on February 2nd, NBC analyst Joe Michaletti stated that McPhee told him that with better goaltending the Caps would have ten more standings points to that point of the season.

A month later, the Caps moved goaltender Michal Neuvirth and just-acquired defenseman Rostislav Klesla to the Buffalo Sabres for the just-acquired Halak and a third-round draft pick in 2015.  The move paid immediate dividends.  Halak went 4-2-0, 2.35, .931 in his first six games with the Caps, and it looked as if McPhee’s comment that the Caps woes were due in no small part to iffy goaltending.  At the very least the club was getting steady play between the pipes.  It recalled, if faintly, the boost that the acquisition of Cristobal Huet gave the Caps in their playoff sprint in 2008 (11-2-0, 1.63, .936, with two shutouts in 13 games to close the season).

Trading the plain white mask with the red cage for a spiffy eagle-themed painted mask was right in line with what goalies do, make a personal statement with their new team.  It did not have the intended effect.  In Halak’s first game with the new lid he lost in a shootout to the Los Angeles Kings.  Then he lost again, in a shootout to the Kings again.  Another shootout loss, this one to the Nashville Predators, followed by losses in regulation against the Dallas Stars and New Jersey Devils, and Halak was 0-2-3 with the new mask, and the Caps’ playoff hopes were toast.

What Halak had in the old, plain white mask that he did not in the fancy new helmet was consistency.  In his first six games he had that record of 4-2-0, 2.35, .931.  Those good numbers were a product of being consistent.  Only once in those six games did he have a save percentage below .927, that coming when he allowed three goals on 20 shots in a 3-2 loss to Pittsburgh on March 10th.

In the new mask he posted overall numbers very similar to his first six games in terms of goals against and save percentage: 2.27, .928.  What he lacked was the same consistency.  Three times in those six games he had save percentages lower than .900, and he was 0-1-2 in those games.  The team in front of him did not help much giving him little goal support in those six games, just nine goals in the five losses in his six-game finish.

Was Halak a clear improvement over Braden Holtby, Michal Neuvirth, and Philipp Grubauer?  Yes and no.  Holtby (.928) and Grubauer (.927) had better save percentages at even strength than did Halak (.922), but those differences are not all that significant.  Halak was much better than Holtby facing opponents’ power plays.  He finished with a save percentage of .960 (72 saves on 75 shots) versus .867 for Holtby (33 goals allowed on 248 shots faced).  That, however, might have been the product of the old “small sample” problem.  Halak had a save percentage of .876 facing opponents’ power plays tending goal for St. Louis.

Halak might have been an improvement on Holtby or Neuvirth, but not so much that it made much of a difference in the Caps’ record.  We still think it was the mask.

The common thread with these three players obtained in the late-season push was “not enough.”  Brown didn’t have enough skill or experience to get a lot of playing time, and when he did, he was not an improvement over those players he was replacing.  Penner didn’t get enough ice time and didn’t do enough with the time he had.  Halak was a marginal improvement over the other three goalies who dressed for the Caps this season, but he was not consistent enough down the stretch to push the Caps over the top and into the playoff eight in the Eastern Conference.  The front office didn’t do enough to give the Caps a spark in the lineup for their home stretch run.  Instead of bringing in the cavalry to help save the Caps’ season, the combination of the players acquired, the manner in which they were used, and the results they provided made things seem more like F Troop. 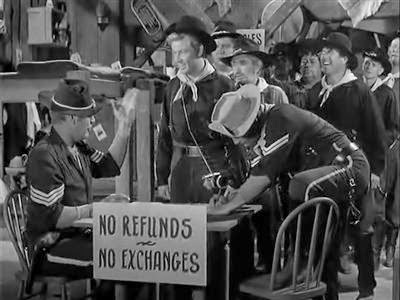 Posted by The Peerless at 7:57 AM No comments: