The Peerless Prognosticator is ON THE AIR!!! -- Opening Night: Capitals at Blues, October 2nd

The Washington Capitals take the ice on Wednesday night in their 45th season opener, visiting the Stanley Cup Champion St. Louis Blues.  It is the third season in the last four in which the Caps will play after a banner raising in a season opener – 2016-2017 in Pittsburgh, 2018-2019 for their own banner raising, and Wednesday in St. Louis for the Blues’ celebration.

The team that the Caps will face on Opening Night was a very different team ending the season than it was starting it last year.  The Blues started the season slowly, going 2-4-3 in their first nine games, and when the record reached 7-9-3 in mid-November, the team relieved head coach Mike Yeo of his duties and turned control over to Craig Berube.  The ex-Capital did have some head coaching experience, taking over an 0-3-0 Philadelphia Flyers team in 2013-2014 and coaching the club for the remainder of that season and the following one, posting a 75-58-28 record over 161 games, plus a first round seven-game playoff exit in 2013-2014.

Berube did not start particularly well with a record of 10-11-1 over his first 22 games. However, starting with a 4-2 win over the Montreal Canadiens that started the team’s first three-game winning streak of the season, the Blues closed with a 28-8-5 record over the last half of their regular season schedule, the best record in the league over that stretch.

One player who took off over the second half of the season for the Blues was winger Vladimir Tarasenko.  After a somewhat lackluster first half in which he went 12-12-24, minus-14, in 40 games, he was 21-23-44, plus-22 in 36 games played in the second half.  He had points in 26 of those last 36 games, 14 of them multi-point games.  Six of those multi-point games came in his last dozen contests, including his last three to close the regular season.  Tarasenko has been a thorn in the Caps’ sides, going 8-2-10, plus-8, in ten career games against Washington.

If Tarasenko dominated the scoring for the Blues in the second half from a forward position, St. Louis got balance from their defensemen.  Three blueliners played the last half of the schedule posting more than 15 points apiece.  Alex Pietrangelo led the group with an 8-18-26, plus-8 scoring line in 41 games in the second half.  Pietrangelo is one of those players who always seems to lurk a level below those considered “elite” at his position, always putting up solid, if not “Norris-worthy” numbers.  In nine full seasons with the Blues (he saw limited action in his first two seasons), Pietrangelo has never averaged less than a half-point per game.  He, Dustin Byfuglien, and Keith Yandle are the only defensemen to have done so in each of the last nine seasons (minimum: 40 games per season).  Over those nine seasons, he is in the top-ten among all NHL defensemen in goals (ninth: 92), assists (tenth: 303), points (ninth: 395), and game-winning goals (fifth: 22).  While he has received votes for the Norris Trophy in seven of the last nine years, he has never been a finalist, his highest finish being fourth in 2011-2012.  In 14 career games against the Caps, Pietrangelo is 2-6-8, plus-2.

1.  The Blues reached the Stanley Cup final in each of their first three seasons in the league: 1967-68 through 1969-1970.  Those were years in which the newly expanded NHL had two divisions, one comprised of Original Six clubs and the other made up the six expansion teams.  After those first three seasons, the Blues did not reach the Stanley Cup final until doing so, and winning, last season.

2.  Over the ten seasons over which the NHL has data on shot attempts, St. Louis has the fifth-best shot attempts-for percentage at 5-on-5 on home ice (53.12 percent).  In those ten seasons, the Blues have never finished a season overall under 50 percent.

3.  With two points in this game Alex Pietrangelo would become the 12th player in Blues history to record 400 points with the club.

4.  St. Louis was one of eight teams to win three games in the Gimmick on home ice last season. 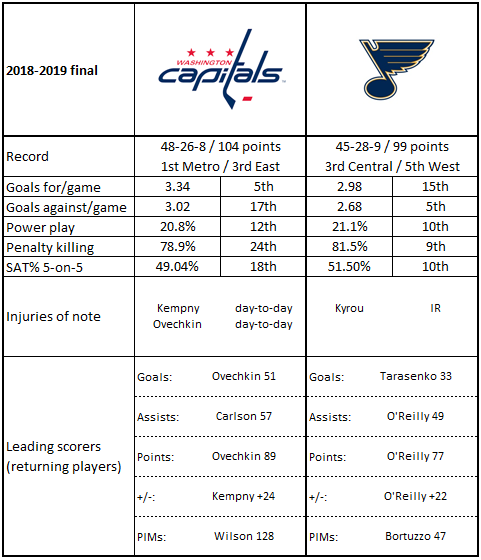 1.  When the Caps lost to the Carolina Hurricanes in the first round of the playoffs last spring, it was their earliest exit from a postseason for which they qualified since bowing out in the first round in 2012-2013 to the New York Rangers. In five of the last six instances in which the Caps were eliminated from the playoffs, they suffered defeat in seven games.

Center Ryan O’Reilly did not come into the NHL with a lot of hoopla.  He was a second round pick (33rd overall) of the Colorado Avalanche in 2009, taken between Landon Ferraro by the Detroit Red Wings and Carl Klingberg by the Atlanta Thrashers.  Combined, those two appeared in 89 career NHL games.  Meanwhile, O’Reilly jumped right into the Colorado lineup and progressed smartly, becoming a reliable two way player in his six years in Colorado (three seasons over 50 points; five times earning votes for the Selke Trophy as top defensive forward).  His stay in Denver was not without its moments, a contract impasse upon his becoming a restricted free agent after the 2011-2012 season perhaps the most important off ice matter.

He seems to have found a home for the time being in St. Louis.  In his first year with the Blues last season, O’Reilly was second on the club in goals scored (28) and led the team in points (77).  He also led the team in plus-minus rating (plus-22) power play points (22), shorthanded points (three), game-winning goals (five, tied with VVladimir Tarasenko and Brayden Schenn), and ice time among forwards (20:46 per game, the only forward to average more than 20 minutes per game).  O’Reilly is 0-9-9, even, in 18 career games against Washington.

So, who will it be?  Radko Gudas, Nick Jensen, a defenseman to be named at game time?  The question of who will be Dmitry Orlov’s defensive partner is one of those unsettled matters for which coaches get paid big bucks to settle.  Orlov spent most of the last few seasons on Matt Niskanen’s left, but Niskanen skates now with the Philadelphia Flyers, traded for Gudas this past summer.  What complicates Orlov’s situation is an almost bizarre inability to put pucks in the net.  He finished last season with three goals, his lowest for a full season for his career.  He did offset that with 26 assists, one off his career high of 27 in 2016-2017, but other parts of his game slipped a bit, too.  He finished with a plus-3 rating, his worst since he was minus-1 in 54 games in 2013-2014.  He had one power play assist, and while he does not generally get much power play time, that lone power play point was the fewest he had since posting a single power play point (an assist) in the 2013-2014 season.  And, his shooting was down almost 20 percent from 125 shots on goal in 2017-2018 to 101 shots on goal last season.  His ice time dropped a minute and a half per game, from 23:08 in 2017-2018 to 21:38 last year.

Other teams get more attention from the national media that the Capitals and the Blues, but these two teams demonstrated their resilience in the face of adversity the past two seasons, the Caps fighting off a slow postseason start to win 16 of their last 22 playoff games to with the Stanley Cup, while the Blues climbed out of the league cellar mid-way through the regular season to storm into the playoffs and ground out four series wins on the way to their own championship.  A matchup of the last two Stanley Cup champions is a fine way to kick off the new season.