Washington Capitals: In the Absence of Alex Ovechkin

Alex Ovechkin will miss his 22nd game as a Washington Capital tonight.  For a player who commands the attention from opponents that he does and for the style of play he displays, that is a respectable record of endurance.

But what of the other side of the equation, how the Capitals perform in his absence?  The Caps have a record of 11-8-2 in games missed by Ovechkin since he came into the league in October 2005.  That record breaks down, by opponent, as follows: 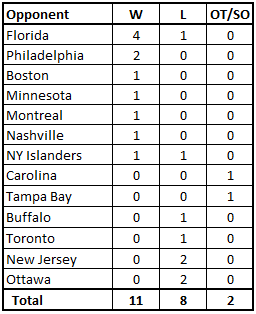 Florida has been a frequent opponent and frequently beaten one.  In fact, the Caps faced predominantly Southeast Division teams in games missed by Ovechkin, compiling a record of 4-1-2 against their old division-mates.  They have had some success against some good teams, though, beating the Flyers twice, the Bruins, and the Canadiens in those games.  They have struggled, though, against other Northeast Division teams, rolling up a record of 0-4-0 against Buffalo, Toronto, and Ottawa.

Looking at the record by season, they more or less mirror the fortunes of the Caps: 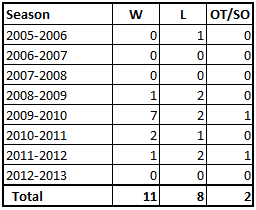 The success carried into 2011-2012 when the beat the Flyers in a 5-4 shootout and the Canadiens in a 2-0 shutout, while losing to Ottawa in a shutout of their own, 2-0, also losing to Tampa Bay in an overtime decision.

You might think that the Caps suffered on offense in their 21 games without Ovechkin.  Averaging 3.38 goals per game does not sound too much like suffering.  Six times in the 21 games they scored five or more goals.  However, all but one of those instances came in that 2009-2010 season when the Caps were torching the league for goals (3.82 per game) and wins (54).

Who were these players who combined for 71 goals?  Here they are (current roster players highlighted)…

Of those 43 players, 11 are still with the Caps and would be expected to play in tonight’s game.  Here you get a hint of who needs to step up, or at least, if they produce the Caps will win: 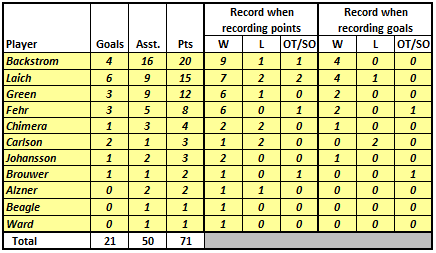 None of this should come as a surprise.  The four players at the top of that list – Nicklas Backstrom, Brooks Laich, Mike Green, and Eric Fehr – are among the leaders on this team (or by this time, should be).  When they have produced in Ovechkin’s absence, the Caps have won, almost to a betting certainty.  These are the players who, for however long Ovechkin remains out of the lineup, must step up in a manner one should expect at this point in their respective careers.

Posted by The Peerless at 12:41 PM No comments:

The Peerless Prognosticator is ON THE AIR!!! -- Game 13: Capitals at Flyers, November 1st


Flew in from Vancouver, BOAC
Didn't get to bed last night
Won two games, then lost a pair
Man, we had a dreadful flight


Whew!  After four games, five-thousand miles, and ten days on road in the western Canada portion of their five-game stretch away from Verizon Center, the Washington Capitals return to the Eastern time zone to face the Philadelphia Flyers at CoreStates/First Union/Wachovia/Wells Fargo Center tonight.

The Flyers have packed a season’s worth of soap opera into a month’s worth of hockey.  They took the ice opening night with the promise that the signing of a big free agent (Vincent Lecavalier, who was bought out by the Tampa Bay Lightning) brings.  Then they started the season with a splat, losing their first three games.  The club responded to that by firing their coach, Peter Laviolette, and replacing him with former Flyer player Craig Berube.

The team responded to the change behind the bench with a win on the ice, albeit over the hapless Florida Panthers.  Their old time swagger back, they then went and lost four straight games, their 1-7-0 record being the worst eight-game start in franchise history.

The Flyers have shown signs of life in the last week, winning two of three games, but they remained mired in last place in the Metropolitan Division with a 3-8-0 record.  Here is how the teams compare in their numbers so far: 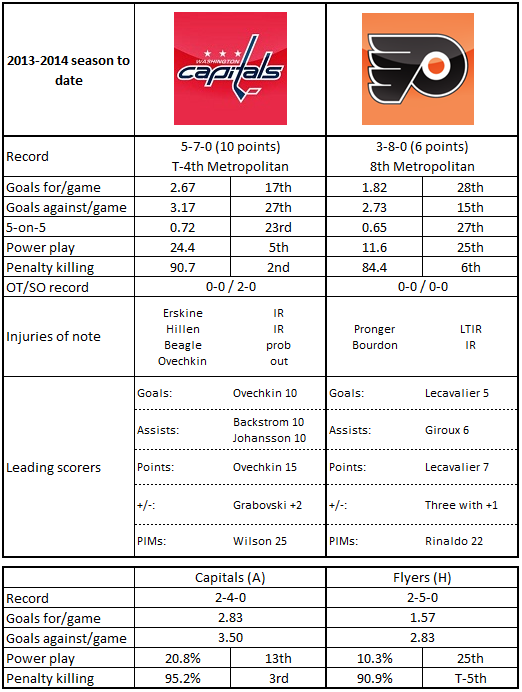 2.  How anemic is the Flyer offense?  Their leading point producer is Vincent Lecavalier, who has seven points in 11 games.  There are 124 skaters with more points, including 19 defensemen.

3.  So far, if the Flyers allow the first goal, they lose.  They are 0-5-0 when allowing that first marker.

4.  If you had Braydon Coburn leading the Flyer defensemen in anything, you might have said, “penalty minutes.”  You would be wrong (Andrej Meszaros leads in that category).  Coburn does lead Flyer blueliners in goals, with two.  The big acquisition there, Mark Streit (a soon-to-be free agent traded to Philadelphia by the New York Islanders) has yet to light the lamp.

5.  Scott Hartnell, who missed four games with an “upper-body injury,” returned to action last Saturday for the Flyers, but he has yet to record a point in seven games played this season.  He is 11-9-20, plus-4 in 28 career games against the Caps.

1.  The Caps will be without Alex Ovechkin tonight, the 22nd time since Ovechkin joined the club that he has been absent.  The Caps are 11-8-2 in 21 games without him.

3.  With Ovechkin on the shelf, Mikhail Grabovski takes his place as the top goal-getter (five).  However, he has only two in 11 games since his hat trick on opening night in Chicago.  The good thing is, those two goals came in the four games in western Canada.  He does not have a goal in the Eastern time zone yet this season. He is 5-2-7, plus-3, in 15 career games against Philadelphi.

5.  Mike Green has seven assists and no goals.  He is hardly alone in that imbalance among defensemen.  In fact, four defensemen have more assists to go along with having scored no goals – Duncan Keith (8), Jay Bouwmeester (8), Cody Franson (9), and Dustin Byfuglien (9).  He is 6-9-15, plus-11, in 27 career games against Philadelphia.

Maybe it’s the cheese-steaks and soft pretzels.  Steve Mason, a former Calder Trophy winner as top rookie who then was playing himself out of the league in Columbus, was traded to the Flyers last April.  He closed the season well with a 4-2-0 record in seven games, accompanied by a 1.90 goals-against average and a .944 save percentage.  Apparently, it was not a fluke.  While the win-loss record is not great (3-6-0), that is more a product of the Flyers sparse offense.  Mason has a 2.25 goals against average and a .928 save percentage in more than 500 minutes of action.  He has yet to allow more than three goals in any of his nine appearances to date.  In six career games against the Caps he is 3-2-1, 2.24, .931, with two shutouts.

Fehr takes over the left wing spot on the power play for Alex Ovchkin and might be assigned the top line duty on the right side. Returning to right wing would be returning to his comfort zone – the position he has played his entire career – after spending most of this season in an experiment at center.  The Caps hope that the rediscovered comfort is accompanied by a rediscovered scoring touch.  Fehr has only one goal in 12 games this season.  In 15 career games against the Flyers he is 2-2-4, minus-3, but for those wondering about what he is capable of on the power play, there is this.  http://video.nhl.com/videocenter/console?id=409698

2.  Terms.  Being a Craig Berube team, and playing a rival at home, one might expect the Flyers to “Flyer-up” against the Caps and dictate physical terms on the visitors. This might be especially true with the new guy – just-acquired Steve Downie – in the lineup.  The Caps need not shy away from that stuff, but they cannot be consumed by it.

3.  Step up.  With Ovechkin out, others have to step up.  It is not just Eric Fehr taking his spot on the power play, it is others who have to step up their game in general.  With Ovechkin out, their absences in previous games will look bigger in this one if they don’t step up.  Guys like Brooks Laich, Mike Green, and Martin Erat have an opportunity here to play bigger roles.

The Flyers stink.  There…we said it.  Philly or not, rival or not, this is a game the Caps should win, even with Ovechkin out of the lineup.  The Flyers have beaten Florida, the Rangers, and the Islanders, the first two of those clubs being the type that couldn’t find the net on offense with a map and a flashlight.  The Caps should not suffer that problem.