The Peerless Prognosticator is ON THE AIR!!! -- Caps vs. Rangers, March 6th

The Peerless Prognosticator is ON THE AIR!!!
Welcome, hockey fans, to another edition of the last prognosto you will ever need (as long as you don’t use it for actual cash wagering). Tonight, the Caps play host to the New York Friggin’ Rangers (that’s a tip o’ the hat to our Big Apple readers). The Caps are coming off a stirring 5-4 win over the Tampa Bay Lightning, if by “stirring” you mean “they should have whacked dem guys” (another tip o’ the hat). The Rangers, meanwhile, visit Washington – the most powerful city on the face o’ de oit (take THAT Ranger fans)…
"You know, temper’s the one thing you can’t get rid of by losing it.”
Oh, pardon me, and you are… 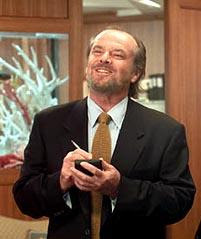 “Rydell, Dr. Buddy Rydell, anger management therapist."
Really, and you think we have anger issues?
“I see the signs…”
OK, we’ll play along… just what could I expect in your anger… uh, “therapy?”
“Well, we need to go over some ground rules. You are to refrain from any any acts of violence including verbal assault and vulgar hand gestures. You may not use rage enhancing substances, such as caffeine, nicotine, alcohol, crack cocaine, slippy-flippy's, jelly stingers, trick sticks, bing bangs, flying willards or images of Sidney Crosby carrying the Stanley Cup.”
How 'bout fiddle-faddels?

“Under my supervision. That having been said, I'm a pretty good guy and I think you'll be pleasantly surprised how much fun we can have together.”


Geez, without slippy-flippy's or bing bangs I don't see how that's possible.
“Sarcasm is anger's ugly cousin... from now on, unacceptable.”
What about hockey games?

“They’re ok… just between you’n me, I like a good ol’ hockey game from time to time, too. I’ve even counseled some folks in hockey?”


Oh? Anyone we’d know?
“Ever hear of John Tortorella?”

OK, well, we’ll check the Yellow Pages if we need that sort of therapy, but in the meantime we have a hockey game tonight. The Rangers are coming into town after dropping a 5-4 overtime decision to the Pittsburgh Penguins in which they had a 4-2 lead in the second period, but frittered it (can we do “frittered,” Doc?) away in the third period when they were outshot 19-1 by the Penguins.

We suspect the Rangers might have their own anger issues after that one.

The big question for the Blueshirts in this one is whether Marian Gaborik and his wonky groin will be up to the challenge of skating on Verizon Center ice. Gaborik is the only truly dependable offensive threat the Rangers have, as his 35-34-69 points line at least doubles the total of any other goal getter (Ryan Callahan: 17) and is 21 points ahead of the next Ranger in line (Vaclav Prospal: 48). The struggles on offense for the Rangers are reflected in the overall numbers... 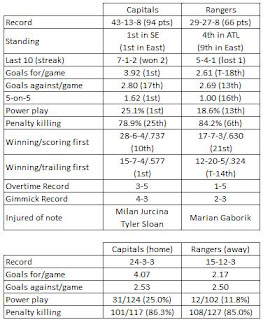 Gaborik has not played since before the Olympic break, and when he went down he was on a nice run – he was 6-2-8 in five games before lasting only 4:02 in his last appearance, that against the Pens on February 12th. His appearance tonight could be very important to the Rangers. While he was held without a goal in his seven career games against the Caps coming into the season, he is 4-2-6 in three games this year against Washington.

Speaking of Ryan Callahan, he might be the Rangers’ second leading goal scorer, but what distinguishes him is that he plays much bigger than it says in the program. Despite being 5’11”, 188 (according to NHL.com), Callahan ranks second in the league in hits (246). By way of comparison, the Caps’ leading hitter – Alex Ovechkin – has 149. He also has some pop on the power play, currently second on the club in power play goals (eight). Callahan had a three-game pointless streak going into the Olympic break, but came out of it with a two-goal effort against Ottawa in the first game back. He is 5-2-7 in ten career games against the Caps, including a pair of goals and an assist in three contests this season.

The Rangers don’t have a lot of offense, so they have to find an advantage by other means. Callahan supplies the hitting, but there is also Brandon Dubinsky, who can be a pain to play against when he is on his game, and of course, Sean Avery, who leads the league in obnoxious.

Dubinsky has three goals in four games straddling the Olympic break, with a goal in each of his first two games out of the break. He has a knack for the clutch goal, leading the team so far this season with five game-winning goals. He has a goal in two games against the Caps this year, his only one in nine career contests.

Avery’s singular talent is getting under the skin of opponents, and it seems to be a motivational tool for him. Four times this season he has accumulated more than ten minutes in penalties in a game. Three times he had points in those contests, twice he’s scored goals. In 32 games in which he has not recorded a penalty minute, he is 3-11-14 (he has 14 points in 27 games in which he has taken a seat in the penalty box). He has only an assist in two games against the Caps this year, and yes, he did have his only two minutes in penalties against the Caps this year in the game he recorded it.

The Rangers’ defense gets a lot of attention. Early on, it was the start by Michael Del Zotto, then it was the continuing development of Marc Staal. There were the struggles of Wade Redden and Michal Roszival. But through it all, the one guy who seems to get little attention is Dan Girardi. The 25-year old in his fourth season has been consistent, if not spectacular. He is fourth among Ranger defensemen in total scoring (5-10-15), tied for second in goals (five), second in penalty minutes, and is second in average ice time. He also has the only shorthanded goal for the Ranger blueliners this year. And, in a perfect alignment of “hit-and-grit” he has 140 hits on the year (13th in the league among defensemen) and 140 blocked shots (tied for sixth).

The trouble for the Rangers, though, is they have so little offense after Marian Gaborik. As if it wasn’t the case if Gaborik had no health concerns, if his groin should become a continuing issue, the season comes down to how goalie Henrik Lundqvist plays. Lundqvist, the Rangers, and Ranger fans have seen this movie before. So far, Lundqvist has taken care of his end of the bargain. Tied for 11th in GAA (with Colorado’s Craig Anderson), tenth in save percentage, and seventh in total minutes played, he has been the foundation for the Rangers once more. Even if his numbers this year don’t rise to those of Vezina finalist consideration, he has been consistent. He has one streak this year of ten appearances in allowing two or fewer goals. He had another streak of doing so in nine of ten games, and he had one of six in seven games before giving up five to the Penguins on Thursday. He has struggled against the Caps this year, though. In three appearances he is 1-2-0, 4.05, .859.

Drury had a solid Olympic Games in Vancouver (a pair of goals, plus-3 in six games). The Rangers would hope that his performance for the silver medalist Team USA would serve as a springboard for a productive sprint to the finish. They might be encouraged by the fact that his is 2-1-3 in four games straddling the break, so he might be thought of as in the middle of a pretty good run. Coming into this year, Drury was 6-17-23 in 26 career games against the Caps, but he is scoreless in two games so far this season against Washington.

Bradley was the odd man out (well, one of them) when the Caps took the ice Thursday against the Lightning. On being scratched, he said, "All I can say is I wish the team well tonight and I hope they win. That's all I have to say. Walker and Belanger are good players and I wish them luck in their first game and, like I said, I want a win for our team." It’s possible to read too much into a quote, but one doesn’t get the feeling that Bradley was happy. Nor should he be; that’s what being a competitor is about. And inf nothing else, Bradley is a competitor. He hasn’t had a lot of regular season success against the Rangers (2-3-5 in 26 career games), but in the last six games he had played against the Rangers (last year’s playoff and this season), he is 3-2-5, plus-6.

1. Special Teams. The three games this year between these teams have been a feast for the power play, a famine for the penalty killers… for both sides. The Caps are 6-for-22 on the power play, the Rangers are 6-for-15. For the Caps, the task is clear and simple… do better killing penalties. No small feat, given that the Caps have allowed at least one power play goal in eight of their last ten games and have a PK success rate over that span of, get this… 69.8 percent. The Rangers have the 28th-ranked road power play in the NHL. If the Rangers get anything out of their power play tonight, the Caps have problems.

2. Be the tortoise. In the three games so far this year, the team that scored first lost. That is not a prescription to allow the Rangers to get the first marker, only a warning that it is a 60 minute game.

3. Shake, Rattle, and Roll. The Rangers are third in the league in road hits. They will bring it with the likes of Callahan, Girardi, Avery, and Dubinsky. The Caps have to make them pay, especially in the face of an aggressive forecheck, with crisp passing in their own end to get the Rangers shorthanded going the other way. Watch the giveaway/takeaway column on the NHL.com event summary.

In the end, it is yet another game of the playoff given against the playoff wannabe. The Caps have won both games coming out of the Olympic break, but having allowed four goals to Tampa Bay on Thursday, that makes six times in eight games they have allowed at least four. 11 of the 26 goals the Caps have allowed in the past eight games have come on the opponent’s power play. Well, the Caps get their chance tonight to turn that around against a team that has a lot of trouble scoring on the power play on the road (11.8 percent), or even getting chances (102 – 27th in the league). The Rangers’ 12 total road power play goals this year is more than only Ottawa and Boston. The Caps can do this, right?... right?