Peerless Playback: The All-Alphabet Team, "The B Team" 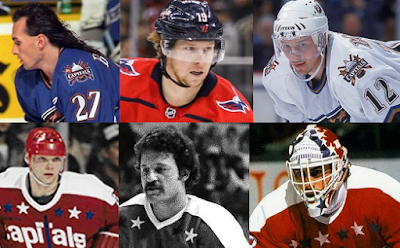 Next up in our look back at series we posted on the history of the Washington Capitals, we take a look at the next installment of the "All-Alphabet Team," that being the one starting with the letter "B."

For the record, our "All-B Team" was:

Would any of these players be replaced since this post appeared in July 2014? It would be hard to think Nicklas Backstrom would be replaced, and even Peter Bondra for that matter.  And on defense, only Madison Bowey in the post-2014 period would qualify as a replacement.  Not that Timo Blomqvist (223 games, 4-51-55, plus-27, 264 penalty minutes as a Capital) or Pierre Bouchard (106 games, 8-16-24, minus-28, 54 penalty minutes) had especially noteworthy careers in Washington.  But Bowey played only 84 games with the Caps, going 1-17-18, even, with 62 penalty minutes.  Call it a matter of debate.

Don Beaupre probably keeps his spot as the goalie on “Team B,” since there were no goalies with a last name starting with “B” playing for the Caps since 2014.  But perhaps there was a Capital goalie from yesteryear you think might be better suited to tend goal.  Something to think about as we “pause.”
Posted by The Peerless at 12:23 PM No comments: