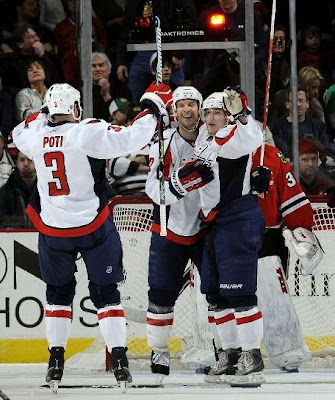 The Background: As the regular season was winding down, this matchup looked as if it could be a preview of the Stanley Cup final. Washington was pressing onward toward a President’s Cup, and Chicago and the San Jose Sharks were in a dogfight for the top record in the Western Conference. If anything, these two teams were reasonably good versions of one another. Chicago entered the game having gone 7-3-0 in their previous ten games (5-1-0 at home), averaging 3.6 goals a game in the process, but lost their previous game, a 3-2 loss in Philadelphia. The Caps were 5-2-3 in their previous ten games (averaging 3.7 goals in those games), and were coming off what might have been a “look ahead” 3-2 home loss to the Tampa Bay Lightning.

The big guns for each team were humming along. Jonathan Toews was 3-8-11 in his previous ten games; Patrick Kane was 4-10-14 over the same period. For the Caps, Alex Ovechkin was 5-9-14 in his previous ten games, while Alexander Semin was 5-5-10 in those same ten games. The teams had not met this season, in fact had not met since the Caps took a 4-2 decision at Verizon Center in the second game of the 2008-2009 season, a game in which the Caps spotted the Blackhawks a 2-0 lead before roaring back with four unanswered goals. It would be something to keep in mind.

Why It Mattered: Only one team in the NHL would finish the season with a winning record after having allowed the game’s first goal – Washington. Coming into this game the Caps were 16-7-4 when allowing the game’s first goal. Good thing, too, because Jonathan Toews got the home team off to a good start with the game’s first goal at the seven-minute mark of the first period – a four-on-four goal scored when Niklas Hjalmarsson found Toews all alone in front of Caps goalie Jose Theodore from the left wing boards.

Giving up first goals was not generally a problem for the Caps, but in doing so, they usually had Alex Ovechkin around to help make up the deficit. Just a little more than five minutes after Toews’ goal, though, Ovechkin’s day ended as a result of knocking Chicago defenseman Brian Campbell into the end boards after Campbell dished the puck to teammate Duncan Keith. Ovechkin was whistled for a five-minute boarding major and a game misconduct (he would later be invited by the league to take a seat for two games as a result, his second suspension of the season).

Shortly after that, another Alex figured prominently in the early momentum for the Blackhawks. Alexander Semin found himself alone on a breakaway as the clock ticked toward the four-minute mark remaining in the first period. Making perhaps one move too many, his shot was smothered by goalie Antti Niemi, and Semin continued his forward momentum, barreling over Niemi and carrying both players into the Chicago cage. Semin was sent off for goaltender interference, and 28 seconds later Toews converted the power play chance, getting his second goal of the game on a put-back past Jose Theodore.

Chicago extended their lead on a goal by John Madden early in the second period, and the 3-0 score might have been the cue for those watching the NBC Sunday national telecast to see what was going on with the Boston-Cleveland NBA game on ABC.

Those folks would have missed an interesting third period. Once more, Alexander Semin figured prominently, this time in changing the game’s momentum. Semin drew a four-minute double minor from Jordan Hendry for high-sticking 3:51 into the third period. It would cause the Blackhawks to come unglued. Brooks Laich converted on the first half of the double-minor to put the Caps on the board. Laich scored the goal on a delayed penalty that would put Colin Fraser in the box for Chicago, another high-sticking call being made.

The Caps would not get a goal on the ensuing full two-minute 5-on-3 power play, but they would score a mere three seconds after the last of the penalties expired to get the Caps within a goal. A shot by Joe Corvo went wide, but took a hard carom off the end boards and came right back out, through the legs of Brooks Laich and onto the stick of Nicklas Backstrom, who wasted no time snapping the puck into the open far side of the net.

The Caps would tie the game on some remarkable work by David Steckel on the next shift. The play began as John Carlson fed the puck down ice for what would be an icing call if a Blackhawk managed to get to the puck first. But Steckel negated the icing by touching it up behind the Chicago net, then winning a fight for the puck with Hjalmarsson. He managed to feed the puck in front, and Eric Fehr slammed it home before Niemi could find the puck and the shooter. The Caps erased a three goal deficit with three of their own in a space of 2:16.

In overtime, Backstrom went from almost-goat to certifiable hero in the space of less than ten seconds. With the clock approaching two minutes left in the extra session, Backstrom turned the puck over on his side of the red line to Troy Brouwer. Backstrom hustled back into the play as best he could, but it was up to Mike Green to try to cut Brouwer off from the almost clean path he had to the Capitals net. Green was enough of a disturbance to allow Backstrom to get back and force Brouwer to lose control of the puck. Backstrom picked it up in the right wing faceoff circle, then started up ice with two Blackhawks – Brouwer and Dustin Byfuglien – caught up-ice. Backstrom wound his way through center ice and into the Chicago zone. Tom Poti and Mike Knuble were with Backstrom on what was a 3-on-2 rush, and the pair drove to the net, backing off the other Chicago defenders – Keith and Brent Seabrook. Backstrom took advantage of the opening that was left, cutting from the left wing into the middle, then snapping the game-winning goal past Niemi and completing an improbable comeback.

The Takeaway: In a season that featured a lot of come-from-behind wins, this might have been the most impressive, given the setting, the opponent, and the circumstances. No team won more games when scoring the first goal of the game than did the Blackhawks last season (40), suggesting that scoring the first goal and putting up a three-goal lead should have been more than enough, even with the Caps’ firepower. Only two teams lost fewer games on home ice than did the Blackhawks (Washington and Vancouver), suggesting that home ice would provide enough of an advantage to prevent a comeback. Then there was the matter of Alex Ovechkin missing the last 46:54 of the game after getting tossed. It took the Caps a bit to get their wits settled, but they stuck to their system and clawed back into the game with determination. After this game, you would think that no lead, nowhere, Ovechkin or no Ovechkin would be safe against the Caps.
Posted by The Peerless at 12:51 PM 2 comments: 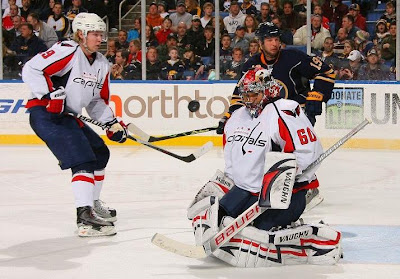 The Background: The Capitals were coming off the Olympic break, a particularly disappointing one for the Capitals representing Team Russia, which was eliminated from medal contention far earlier than most predicted. Of more immediate relevance, the Caps were looking to hit the home stretch of the season running after stumbling into the break with three consecutive losses (0-1-2) and allowing 15 goals in those three games. With 41 wins in the bank and 20 games left to play, the Caps were in no danger of slipping out of the playoffs, but there were the matters of the top record in the league and the desire to generate some momentum heading down the home stretch that were of importance.

As for the opponent, the Sabres’ Olympian goaltender (representing Team USA) Ryan Miller was making his first appearance after the Games. Although Miller had a 1-2-0 record against the Caps for the season coming into this game, his one win was a 3-0 whitewashing of the Caps on December 9th, and he had shut out the Caps in two of the last three games he played against them on HSBC Arena ice.

Why It Mattered: Given that Miller could have been a goaltender the Caps might have faced in the playoffs, establishing a pattern of success against him was important. However, Miller certainly did his part to frustrate Washington and plant the seed that his domination of the Caps (a 10-5 career win-loss record coming into the game) was not about to end. He stopped all 11 shots he faced in the first period and the first 11 shots he faced in the second frame. Then, the Caps caught a break. Tomas Fleischmann skated out from behind the goal line and through two Buffalo defenders sent the puck out to Jeff Schultz out on the left point. As the puck was heading out to Schultz, Eric Fehr charged to the front of the net to line himself up as a screen against Miller. Jason Chimera also was heading to the net to provide some more traffic. Schultz fired, and as the puck was coming through, Tim Kennedy tried to tie up Fehr’s stick, but Fehr managed to tip the puck, whereupon it then deflected off Chimera and past Miller into the net.

Buffalo scored exactly 60 seconds later when Brooks Laich and Mike Green both were caught heading the wrong way as a loose puck found its way onto Jochen Hecht’s stick for a quick wrister past Jose Theodore. That sent the game into the third period as a 1-1- tie. But midway through the final period, the Caps did what they did best all season. Fleischmann led a jail-break into the Sabres’ zone with Chimera and Fehr charging toward the net. Flesichmann peeled off into the right wing faceoff circle, then found Mike Green trailing the play and steaming down the slot. Flesichmann put the puck on Green’s tape, and the defenseman made up for his gaffe in the second by sending the puck past Miller before the goalie could react.

After that, the Caps turned things over to Theodore, who turned away all nine shots he faced in the period, six of them coming after the Caps scored the tie-breaker, one of them a point-blank save on Chris Butler, who was left all alone in front with the clock ticking toward the four-minute mark to play. Boyd Grodon sealed the win with a 190-foot bank shot from behind his own goal line off the side boards and into the Buffalo net to seal the 3-1 win.

The Takeaway: The win in the first game after the Olympic break propelled the Caps to a three-game winning streak to start the month and a 13-2-5 finish to the season. After giving up 19 goals in the four games leading into the break (and a 1-1-2 record), putting the clamps to Buffalo was a welcome start to the home stretch of the season. It was an especially high note to start on for Jose Theodore in the post-Olympic portion of the season, given that he allowed 16 goals in his last four appearances before the break. Even though he was on a twelve-game unbeaten streak (in regulation, a 10-0-2 record), he wasn’t providing much comfort that he could continue that run. In fact, he would get a shutout in his next appearance, a 2-0 win over the Rangers, and finish the season with a 20-0-3 record in his last 24 appearances. If the story coming into the game was the Sabres’ goaltender, it was the Caps’ goalie by game’s end.
Posted by The Peerless at 7:30 AM No comments: