More on the History of 50-Goal Scorers 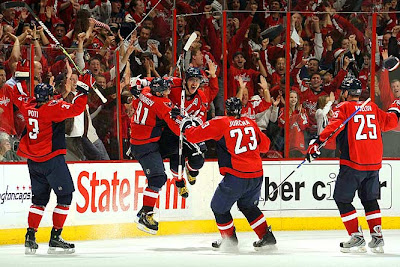 The folks at Jewels From The Crown put together a very elegant depiction of the history of 50-goal scorers in the NHL last week. The question for which they were seeking an answer was what that history looked like for players after age 26. The context of the question was whether Ilya Kovalchuk would have been with a $100 million/10 year contract to the Los Angeles Kings. The general conclusion is that goal production declines for elite (i.e., 50-goal) scorers after the age of 26, making Kovalchuk's value at that level of compensation uncertain.

We looked at those data put together by Jewels From The Crown with another question in mind. What is their winning profile?  Do these players win after the age of 26?  Or, are their Stanley Cup victories early-career phenomena?  To look at these questions, there is the matter of the players in this population that have won at least one Stanley Cup. Of the 89 50-goal scorers in the population, 50 of them have won at least one chalice. Now, we can look at the question in a number of dimensions (click on the pictures below for larger versions).

What came first, the chicken or the egg?

There are 121 Stanley Cups won among these 50 players. 66 of them were won before the age of 27. 31 of them were won after the age of 30, and only 13 of those won by players skating for the team they broke in with. Six of those were recorded by Maurice Richard in Montreal and another three by Steve Yzerman in Detroit. And of those 13 Stanley Cups, only one included a 50-goal season, that by Joe Sakic with Colorado at the age of 31. Of the 33 players on this list who won a Stanley Cup before the age of 27, 19 of them went or have gone so far the 27-and-older portion of their careers without winning another Cup (one player in this group – Sidney Crosby – is still under 27).

There are those who say dynasties are a relic, that the salary cap and free agency conspire to keep teams from assembling teams that can win multiple Stanley Cups in a short period of time. The history of 50-goal scorers lends some credence to this idea. Ten 50-goal scorers have won at least four Stanley Cups. Seven of them did it with one team, and all of them won at least four with a single team. The franchises represented here are few – Montreal, Edmonton, and the New York Islanders. Nine of the ten players won at least three Stanley Cups by the age of 26, and nine of them won at least four by the age of 27. Maurice Richard is the outlier here, having won six Stanley Cups after the age of 30.  But the very notion of a dynasty implies being able to keep a team together, not in their achievement in the first year of that run of success.  And in that respect, it bears noting, despite all the purple among the players at the top of the chart above, how many players won their first cup before the age of 27.

Another 21 players have won multiple (two or three) Stanley Cups. This is an interesting group in that 24 of the 47 total Cups won by these players were won after they reached the age of 27. But only 11 of those were won by players skating for the teams they broke in with, and ten of those belong to four players – Steve Yzerman (three), Sergei Fedorov (three), John Bucyk (two), and Phil Esposito (two). The careful reader will note that there are only two teams represented there – the Detroit Red Wings of Yzerman and Fedorov, and the Boston Bruins of Esposito and Bucyk.

The remaining 19 players on this list have won a single Stanley Cup. Only nine of them won their Cup before the age of 27, eight of them doing with the team they broke in with. On the other end of the spectrum, among the ten players winning a single Stanley Cup four of them had reached the age of 35 or older, all of them with teams other than those they broke in with.

The Curse of Bettman

Only one player among the 89 50-goal scorers in the original list is currently active and has more than one Stanley Cup on his resume – Mark Recchi. He won the second of his Stanley Cups at the age of 37 while playing with Carolina in 2006. That came 15 years after he won his first Cup, at the age of 22 as a rookie with the Pittsburgh Penguins (parenthetically, that rookie year was his career high in playoff goal scoring – ten in 24 games). Five other players currently active have a 50-goal season and a Stanley Cup. One Stanley Cup apiece. And here is something to try on for size. Since Gary Bettman was named Commissioner of the NHL In 1993, only two players have recorded a 50-goal season while winning a Stanley Cup. Adam Graves did it with the New York Rangers (52 goals) in 1994, and Joe Sakic did it twice with the Colorado Avalanche – in 1996 (51 goals) and in 2001 (54 goals).

All of this, as you might suspect, comes around to the Capitals. They have a 50-goal scorer of some note – four times in five seasons, in fact. But will that kind of production by Alex Ovechkin translate into a Stanley Cup for the Capitals? Well, history suggests it had better be sooner than later, given the preponderance of 50-goal scorers who won a Stanley Cup before their 27th birthday, especially with the teams that drafted them. But given the history of the last ten years, he is swimming upstream against that history – no 50-goal scorers on a Stanley Cup winner in the last eight seasons, and only three in the last 17 seasons.

We are not suggesting that Ovechkin go into the tank as far as goal scoring goes, or that the Caps should trade him to achieve more balanced goal scoring. We are suggesting two things, though.  First, when you think about the historic scarcity of 50-goal scorers among players in their 30’s (as depicted by Jewels From The Crown) and the number of players who won Cups in their early years with the teams they broke in with, if you are going to give players long-term/big money contracts, it would seem better to do it when their entry level contracts expire.  There is, of course, a lot of risk in that, what with locking up so much cap room in players not out of their early 20's.  In terms of productivity, the Caps will enjoy the most productive goal scoring years of Ovechkin's career, whose current contract will not expire until he is 35 years old.