Having been dispatched by the Boston Bruins in consecutive games, the Caps have something of a lull in their upcoming schedule.  In their next four games they will host Atlanta, then go on the road to face Carolina, Minnesota, and Calgary.  Those four teams are a combined 12-11-1 so far and have a combined goals for/goals against record of 64 goals for and 67 against.  It's also worth noting that these four clubs have a combined penalty killing mark of 80.7 percent.  Atlanta and Carolina are both bottom-five clubs in this regard.

Gotta make hay while the sun shines.  And the sun is shining on the Caps' schedule over the next week.
Posted by The Peerless at 1:49 PM 2 comments: 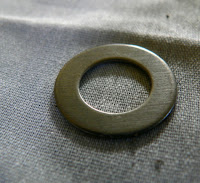 Even when the Caps weren’t playing well, their penalty killers were sublime. Running down bewildered skaters, breaking up passes, flicking pucks down ice, getting big saves. Twenty five times in a row.

The Boston Bruins had four power play opportunities last night and cashed in on three of them. And what made the performance intolerable was that the Bruins had nine different players register points on the man advantage. Michael Ryder, Nathan Horton, and Zdeno Chara scored the goals. Patrice Bergeron, Tyler Seguin, Mark Recchi, Milan Lucic, Johnny Boychuk, and Blake Wheeler had the assists.

And the Bruins were rather efficient in their dissection of the Caps’ penalty kill in another respect. The three goals were recorded in a span of 3:23 of total ice time. It took the Bruins barely 60 seconds to find the holes. They scored their three goals on seven total power play shots. The Caps, on the other hand, also had seven power play shots on goal, but they failed to score on any of them.

That was the difference as the Bruins completed the home-and-home sweep, besting the Caps in their home opener, 4-1. Let’s get to the stuff…

-- 17 shots on goal, not a point to show for it. If the best players (in this case the top line of Alex Ovechkin, Nicklas Backstrom, and Mike Knuble) aren’t the best players, you’re going to see a lot of nights like this. It was made worse by the second line of Alexander Semin, Tomas Fleischmann (edit: ok, yeah...Marcus Johansson got the call on the second line, but he took an ofer, too), and Brooks Laich going 0-for-8. The top two lines going 0-for-25. That’s a recipe for no-point stew.

-- Yeah, Jarosl—oops, Tim Thomas had a nice night – 38 saves on 39 shots. But the Caps didn’t exactly make it difficult for him either. Too many shots low to the ice where Thomas could get his pads in the way. Even on their best chances (Mike Knuble’s chance from the post comes immediately to mind), they shot pucks into the pillows. They just weren’t able to lift pucks where Hala—uh, Thomas might have found it more difficult (at least when he wasn’t having pucks bounce off his mask).

-- Every single Bruin except Michael Ryder was credited with at least one hit.

-- Sometimes in basketball teams will abandon the usual two guard offense in favor of a three guard offense. Seems the Caps have their own version of this, a “three winger” line. The Alexander Semin-Tomas Fleischmann- Brooks Laich line (although Marcus Johansson saw a lot of action there) seemed a little like a three winger line. Fleischmann, the nominal center of that line, took only two offensive zone draws (Johansson took only three), yielding to Laich, who took five (and won four).

-- Taking four penalties is not terrible, but tripping, hooking, interference, and too many men on the ice. The Caps sure didn’t get their money’s worth for the fouls they took.

-- Semyon Varlamov played reasonably well – 26 saves on 27 shots at even strength. But he was not the Caps’ “best penalty killer,” either. The Horton power play goal that trickled through him took the fight out of the Caps.

The Caps did not play poorly, although their aggressiveness on the penalty kill was solved by the Bruins, who found a lot of open space in the seams for good looks at Varlamov. It was another confounding performance in that the offense – allegedly the stegth of this team – looked as if it was somewhere else a lot of the time. There will be considerable gnashing of teeth this morning over another loss, but keep this in mind. Last year the Caps were 3-2-2 after seven games (eight points, just like they are this morning). And they allowed 21 goals in those seven games (compared to 18 so far this season). Their problem is that they are scoring at a full goal a game less than last year at this time (19 goals, compared to 26 after seven games last season).

You would like to think that when the offense warms up, things will look a lot better. But then again, the Caps have only 12 goals in six games against opponents not playing in the state of New Jersey. They’d better warm up quick.  If not...