“Reject your sense of injury and the injury itself disappears.”
-- Marcus Aurelius

The quote attributed to Marcus Aurelius is usually applied to matters of psychic injury, not physical ones.  But hockey players, like any professional athletes, are high-performance, finely tuned individuals.  And when Michal Kempny suffered a severe torn hamstring injury in a game against the Tampa Bay Lightning in March 2019, an injury that required surgery and a long rehabilitation, it was reasonable to believe that he would be something less than full strength when he returned to the ice.  Rehab takes a player only so far, the rest coming by playing one’s self back to full strength.

In fact, Kempny was held out of the first eight games of the 2019-2020 season and did not make his debut until October 18th.  When he did return, he did so with gusto, posting points in eight of the first 11 games he played, going 3-8-11, plus-9, while averaging more than 19 minutes of ice time per game and helping the Caps to a 9-0-2 record in those games.

That would be a torrid pace for a completely healthy defenseman to maintain, and Kempny was not likely 100 percent.  Over his next 21 games he recorded only a pair of assists and tok a minus-1 rating.  The Caps still went 14-6-1 over those 21 games, but for Kempny it was still a matter of playing himself back to full health.  He broke out of that slump with points in three straight games in early January for the first time in two months, but he could not sustain that mini-run, either.  He finished the season 0-2-2 in his last 23 games, although he did post a plus-10 rating, suggesting his two-way game made strides. 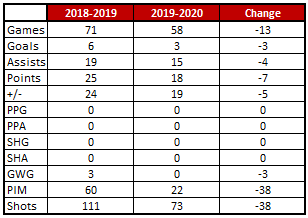 Kempny has become a bit of an underrated offensive contributor.  Although he was coming back from a serious leg injury, his per-game production did not suffer much of a fall off from the 2018-2019 season.  Last season he averaged 0.08 goals per game compared to 0.05 this season, and his points slipped slightly, from 0.35 per game last season to 0.31 per game this season.

Kempny did not have a goal in the last 53 games he played (on 68 shots on goal), none after October 25th.  He had an odd home-road split, too.  He recorded nine points at home and nine on the road, but he was a plus-17 on the road, while he was just plus-2 on home ice.  He also had 20 penalty minutes on the road while taking only two in home games.

Odd Kempny Fact II… In his two full seasons in Washington, Kempny has fewer giveaways per 60 minutes (2.01/60 minutes) that any other Caps defenseman who has appeared in more than ten games with the exception of Radko Gudas (1.93/60 minutes).

Game to Remember… November 1, 2019.  Sometimes the memories are of goals scored, and sometimes the memories are of helpers.  For Michal Kempny, it was the latter to open the month of November when the Caps hosted the Buffalo Sabres at Capital One Arena.  Washington buried the Sabres under an avalanche of goals in the first period, scoring four times over a span of less than five minutes to take a 4-0 lead.  Kempny assisted on the third goal, picking up the primary assist on Jakub Vrana’s second goal of the game.  Buffalo got one back mid-way through the second period, but late in the period Kempny hustled to keep a loose puck in the offensive end and fired a shot from the left point that Tom Wilson redirected past goalie Linus Ullmark to make it a 5-1 game.  Kempny recorded his third primary assist of the game in the third period when he took a drop pass from Alex Ovechkin just inside the Sabres’ blue line and fired the puck to the front of the net where T.J. Oshie was closing.  Oshie chipped the puck past Ullmark, and the Caps had their final margin in a 6-1 victory.  It was Kempny’s first three-point game as a Capital.

Game to Forget… December 16, 2019.  We are of a mind that for an NHL hockey team over the course of a regular season, there are 20 games it will win, no matter what, and 20 games it will lose, no matter what, leaving the remaining games to determine whether the season is successful or a bust.  When the Caps visited the Columbus Blue Jackets in mid-December, it appeared to be one of those games they were going to lose, no matter what.  The Blue Jackets were not especially dominating, but they cobbled together a goal by Eric Robinson in the first period and a pair of goals from Oliver Bjorkstrand in the third period to deal the Caps a 3-0 loss.  For Kempny’s part, he was on the ice for all three Columbus goals to earn him his only minus-3 rating of the season.  He finished with two shots on goal and a credited hit in 14:18 of ice time (his third lowest of the season) in what was a rather empty line on the score sheet.

Things started poorly for Michal Kempny in the postseason, got worse, and then got very quiet.  He had one point in the three-game round robin phase (an assist in the Caps’ lone win, a 2-1 win over the Boston Bruins).  He then went without a point in Games 1 and 2 against the New York Islanders in the opening playoff round, posting a minus-3 in a 4-2 Game 1 loss.  His 19 minutes of ice time in Game 2 were his last minutes of the season; he was held out of the final three games of the series.

Michal Kempny has two more years to run on his four-year/$10 million contract signed in June 2018.  He does not occupy a crowded cohort (cap hit of $2.0-$3.0 million, age 27-33), but he does compare favorably with the others in the group.  The difficulty is that he is in a crowded cohort on his own team.  Call it “The Uncertainty Group.”  The Caps have decisions to make with Brenden Dillon and Radko Gudas (pending unrestricted free agents), and even Nick Jensen, who is in the same age/cap hit cohort as Kempny, with three years left on his contract.

Michal Kempny is a huge question mark heading into the off season.  Was his drop off a product of his being not fully recovered from a serious injury, or was the drop off a permanent regression in his level of play.  He came out of the 2018 Stanley Cup run being the darling of the trade-deadline acquisition crowd, the key final element that provided stability among the defensive pairs.  But this season was uneven in the extreme with respect to his performance, resulting in his being a healthy scratch late in the regular season and again as the Caps faced playoff elimination.  The Caps are going to be asked to make a bet on his returning to full health, and full production, next season.  Given the other question marks at the position, it might not be a bet they are willing to make and could look to move him elsewhere.  It is one of the story lines that bears watching in the weeks and months ahead.