“Twice and thrice over, as they say, good is it to repeat and review what is good.”
-- Plato

When Brett Connolly signed a one-year, $850,000 contract with the Washington Capitals In July 2016, he arrived as a player with things to prove.  A sixth-overall draft pick in 2010, he was not able to translate that high selection into impressive numbers on the ice.  He spent three and a half seasons with the team that drafted him – the Tampa Bay Lightning – before he was shipped to Boston for a couple of second round draft picks (you are forgiven if you do not remember the selections as Matthew Spencer and Boris Katchouk).  He spent a year and change in Boston but was unable to put up noteworthy numbers there.

And that brought him to Washington on a one-year “demonstration” deal.  Demonstrate, he did.  In 66 games he recorded a career high 15 goals, a second-best 23 points, and a career best plus-20.  His reward was a two-year deal for $3.0 million.  The next task, then, was to demonstrate that the 2016-2017 season was not a fluke.

It wasn’t.  Getting mostly third-line minutes, Connolly duplicated his 2016-2017 season in goals with 15 in 2017-2018.  He added 12 assists, the second highest total of his career, and chipped in a career best four power play goals.  What was perhaps most amazing about his performance in 2017-2018 is that he took an uncommonly efficient shooting percentage in 2016-2017 (18.5 percent) and improved on it, reaching 22.4 percent this season.  Over his two seasons in Washington, of 1,104 players recording at least 50 shots on goal, Connolly has the fifth-best shooting percentage (22.4 percent).

It made for a consistent season as one looks at his goal production through his ten-game segments.  He failed in only one segment to record at least one goal (the seventh segment, for Games 61-70, which made up the last part of a 15-game goalless streak that would eventually reach 16 games).  He was just as consistent in posting points, with a slight upward trend in his production as he worked his way through the segments. 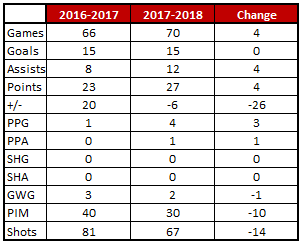 Fearless’ Take… The Caps got a healthy dose of secondary scoring this season, and Brett Connolly was in the thick of it.  He had points in 25 of the 70 games in which he appeared, and the Caps were 17-5-3 in those games.

Cheerless’ Take… It was better if Connolly got those points early, cuz, because he didn’t wear well the longer he skated in games.  In 21 games in which he logged at least 13:30 in ice time, the Caps were just 8-11-2.  And the flip side of that “secondary scoring” thing is actually, you know…shooting the puck.  Washington was 15-11-2 in 28 games in which Connolly did not record a shot.

Odd Connolly Fact… The Caps have never lost a game in regulation on home ice when Brett Connolly scores a goal.  They were 12-0-2 in such games.

It is not often that a memorable game comes in one where a player fails to record a point, even rarer when that player doesn’t register a single shot attempt.  But sometimes a player contributes in other ways.  The Caps certainly have had the Boston Bruins’ number in recent years, and nothing in this game in mid-December would change that.  The Caps got a pair of goals from an unlikely source – Alex Chiasson – and multiple point nights from Alex Ovechkin and Dmitry Orlov.  Connolly’s contributions were of perhaps a more mundane sort, but they left an impression, no doubt.  Against a team for which he played in 76 games over two seasons, he registered four credited hits, tops among forwards for the game, and the Caps won, 5-3, in what was Connolly’s 300th game in the NHL.

Brett Connolly has never had much success against the Vancouver Canucks.  Fortunately, he had not had much opportunity to add to his misery.  Going into Vancouver for a game on October 26th, Connolly was 0-1-1 in six career games against the Canucks.  He had the same scoring line after this game.  In a game that might serve as a thoroughly forgettable experience for the whole squad (the Caps lost, 6-2, after digging themselves a hole by giving up the game’s first five goals), Connolly skated a team-low eight shifts and 5:19 in ice time (his shortest night of work for the season).  He skated one shift in the second period and did not see the ice again, courtesy of an upper-body injury he sustained from a hit by defenseman Erik Gudbranson.  Connolly would miss the next seven games.

Postseason… Connolly took a while to get started on offense in the postseason, recording a lone assist in the six-game first round series against Columbus and getting shut out in points in Game 1 against Pittsburgh in the second round.  But he was a solid contributor starting with an insurance goal in the second period to give the Caps a 3-0 lead in Game 2, a game they would win, 4-1.  Starting with that game, Connolly went 6-2-8, plus-4, in his last 17 postseason games and shot an amazing 28.6 percent.  This despite averaging only 10:49 per game.  It was a far cry from last year’s postseason in which he did not record a point in seven games.

Brett Connolly has carved out a productive niche for himself as a third liner who can provide some offensive pop.  He was sixth on the team in goals scored, tied for fifth in power play goals.  He was not an especially effective possession player (he was 15 of 26 skaters appearing in at least 40 games in shot attempts-for percentage at 5-on-5), but he did have a reasonably good takeaway-to-giveaway ratio (0.89) for a player getting third line minutes.  His performance, repeating in many respects his 2016-2017 effort, help the Caps weather the departure of fellow right winger Justin Williams last offseason.  But while his 2017-2018 regular season did look a lot like a repeat of his 2016-2017 regular season, it was his erasing the memory of his 2017 postseason with a much more productive 2018 postseason that will merit repeat viewings.