Washington Capitals: That Was The Week That Was - Week 3

And they keep on rollin’.  The Washington Capitals had a full slate of four games in Week 3 and earned points in all of them to finish the week with a club record for consecutive games with points earned to open a season.  The week left the Caps two points clear of the rest of the East Division and with the best record in the league. 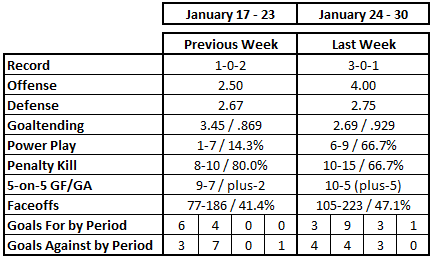 The Caps have been playing close to the margin in the early going.  They had three one-goal decisions in Week 3, splitting two decisions in extra time and beating the Islanders in the first of their two-game set, 3-2, on Tuesday.  Of their nine games so far, the Caps have played to seven one-goal decisions with a 4-0-3 record in those games, and to that add the season opener in which Washington scored an empty net goal in a one-goal game to beat Buffalo, 6-4, and it has been close calls for the most part in the early part of the schedule.  Nevertheless, the Caps still have a franchise best nine straight games with points to open a season, topping the seven straight games (7-0-0) they had in 2011-2012.

It was a good week in what has been a good early season for the Caps.  Despite the fact that the team had 71 goals from last season sitting on the bench for three games (Alex Ovechkin: 48; Evgeny Kuznetsov: 19; Dmitry Orlov: 4) and another 21 in Tom Wilson missing two games, the Caps scored 16 goals in four games and in all four posted three or more.  They have three of more goals in eight of nine games so far and twice posted six goals.

Week 4 was a balanced week for the Caps among the skaters.  Twelve different skaters shared in the 16 goals, four of them – Conor Sheary, John Carlson, Nicklas Backstrom, and Justin Schultz – each with a pair.  Washington had 18 skater among the 23 to dress post points.  Backstrom led the way with eight points (2-6-8), and Jonas Siegenthaler was the only skater playing in all four games without a point.

It was The Vitek Vanecek Show in Week 3.  The rookie got all four games with Ilya Samsonov sitting out under COVID protocol and Craig Anderson perhaps not quite ready for prime time.  He stepped up, big time, with the added responsibility.  No goalie in the league faced more rubber in Week 3 (155 shots), and none had more saves than Vanecek (144).  His .929 save percentage ranked ninth among goalies facing at least 50 shots.  His .954 even strength save percentage was fifth of 29 goalies in that group.  Vanecek did it with consistency.  He posted a .930 or better save percentage in three of the four games and a .919 save percentage or better in the first, second, and third periods he played for the week.

The Caps led the league in power play conversion rate in Week 3 and were, in fact, the only team to convert more than 50 percent of their power play chances (Toronto: 41.7 percent).  Five players shared in the six powerplay goals scored for the week, John Carlson with a pair with Tom Wilson, Richard Panik, T.J. Oshie, and Nicklas Backstrom providing the others.  Eight players posted power play points, Backstrom leading that group with five.  This was the first week the Caps finished over 50 percent on its power play since Week 25 of the 2016-2017, when they went 6-for-8 (75.0 percent).

What the power play taketh, the penalty kill giveth back.  It was a double whammy for the Caps in Week 3 with giving up 15 power play chances in the four games and allowing five goals.  The penalty kill finished 27th in the league for the week.  It was not so much the time, the Caps’ 24:38 in penalty killing ice time ranking seventh-most in the league, nor was it the shots, with 23 shots in that 24:38 of ice time (less than a shot on goal per penalty killing minute).  And it was not the quality of the opponent; only Boston came into the week in the top half of the power play rankings of the three opponents.  And the nature of the opponents scoring power play goals – Eric Staal, Colin Miller, Victor Olafsson, Anders Lee, and Nick Ritchie – suggest a decent, but not elite level of scorer.  It was just a bad week.

A below-50 percent is not much cause for celebration in this category, but it could have been worse.  Boston came into the week ranked fourth in faceoff winning percentage, and the Caps were 22-for-49, the 44.9 percent being lower than the week as a whole, but given the absence of Lars Eller to take a share of draws, not a bad outcome.  Buffalo was tenth coming into the week, and the Caps were 34-for-70 (48.6 percent).

Eller, injured against the Islanders, was missed in the second half of the week after posting a 57.1 winning percentage to open the week (16-for-28).  That led all Caps taking ten or more draws.  Nic Dowd was the other Capital to finish over 50 percent in that group (54.3 percent).  Where the team has its struggles was in the defensive end, where they went 38-for-88 (43.2 percent).

The Caps have had their issues with the second period this season, but not in Week 3.  It started peacefully enough with the Caps scoring single goals in the second periods against Buffalo and the New York Islanders to open the week.  But then, the Caps lowered the boom on the Islanders in the middle period of their rematch on Thursday.  After posting the Isles to a 3-0 lead in the first period, Washington scored five second period goals to take a lead in a 6-3 win.  They added a single goal in the second period against Boston to finish the week with a 9-4 goal differential in the middle periods of games for the week.  It made up for an otherwise largely break-even score in the first and last periods of games in Week 3. 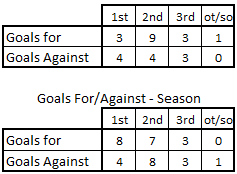 The year-over-year numbers look more than a bit odd.  Shots from last year to this year, down.  Shots allowed, up.  Power play chances, half of what they were through nine games last season.  Almost twice as many power play goals allowed.  Faceoff winning percentage, down.  Shot attempts-for percentage at 5-on-5, down.  One could reasonably think, if they didn’t know the Caps’ record, that this team was lagging behind last year’s in wins and losses.   Of course, we do know what the Caps’ record is, but it is a signal that things under the surface might not be as rosy as the top line numbers suggest.  Still, it shines a light on the importance of banking points, even when the underlying performance is less than impressive. 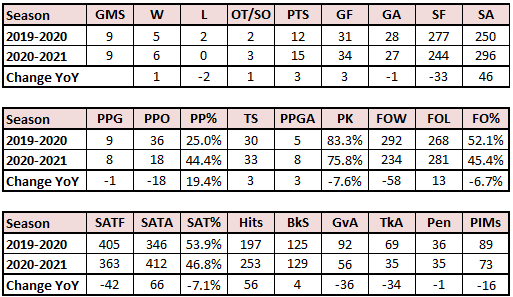 Wins are wins, and the rest is noise.  That’s the bottom line, but the Caps had their moments to give fans heartburn.  Falling behind by three to the Islanders before roaring back.  Giving up a three-goal lead to Boston before winning in overtime.  It speaks to a certain resiliency the team is building that will keep it in more games than one might otherwise were salvageable.  But in the end, wins are wins, points are points, and the Caps have as many or more of each than any team in the East Division.  It is a good thing, too, what with the Caps wrapping up their two-game set against Boston, visiting Madison Square Garden to take on the precocious Rangers, and ending Week 4 with a the first of a two-game set with Philadelphia, who tormented the Caps last season.  The wild ride continues.

Posted by The Peerless at 12:16 PM No comments: