The Peerless Prognosticator is BACK ON THE AIR!!! -- Round Robin Game 1: Capitals vs. Lightning 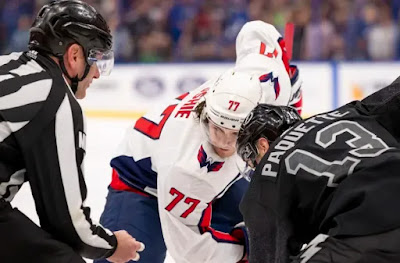 August 3rd is the 216th day of 2020, was the day in 1492 that Christopher Columbus set sail from Spain for the New World, is the 99th anniversary of baseball Commissioner Kenesaw Mountain Landis banning the eight Chicago “Black Sox” from Major League Baseball, and it is the day this year on which the Washington Capitals resume their chase for the Stanley Cup.

The Capitals and the other 23 teams in the revamped Stanley Cup tournament have been frozen in place on their Stanley Cup course since the NHL announced its “pause” in the season due to concerns over the COVID-19 virus on March 12th.  But Monday, the Caps will take the ice for the first game with meaning in 147 days when they face off against the Tampa Bay Lightning in the first of three round-robin games to determine seeding for the official “playoffs” to follow.

How we got here…

Tampa Bay scored goals 5:38 apart (Braden Point, Mikhail Sergachev) straddling the first and second periods to take a 2-0 lead in Washington.  After Evgeny Kuznetsov halved the lead on a power play 5:17 into the second period, the Lightning took their second two-goal lead of the game on an Alex Killorn goal with 1:12 left in the frame, the second time in the game the Bolts scored with less than 90 seconds left in a period.  Jakub Vrana scored 3:45 into the third period to pull the Caps within a goal for a second time, and then Alex Ovechkin tied the game on a power play mid-way through the period, beating goalie Andrei Vasilevskiy with a one-timer on the short side:

Dmitry Orlov won the game 3:03 into overtime when he looked off Vasilevskiy from the left wing circle faking “pass” and snapped a shot past the goalie’s blocker for the win.

The second meeting of the teams started innocently enough, Nicklas Backstrom opening the scoring in the seventh minute of the first period and Brayden Point tying the game in the sixth minute of the second period in Tampa.  In the third period, though, the Caps dominated.  Lars Eller and Garnet Hathaway scored less than a minute apart early in the period to put the Caps in front.  Jan Rutta got one of them back mid-way through the period, but T.J. Oshie put to rest any further thoughts of a comeback with a goal 63 seconds after Rutta’s to give the Caps a 4-2 lead.  Tom Wilson closed the scoring with an empty-net goal with 38.6 seconds left in the 5-2 Caps win.

After a scoreless first period, Radko Gudas opened the scoring 4:40 into the second period to give the Caps the lead.  That goal held up until the 10:00 mark of the third period when Nikita Kucherov tied the game for the visitors.  The Caps broke back on top less than four minutes later on a goal by Dmitry Orlov, who one-timed a feed from Jakub Vrana from the top of the left wing circle for what proved to be the game-winning goal.  Nic Dowd provided the final margin with a shorthanded empty-net goal with 2:23 left. 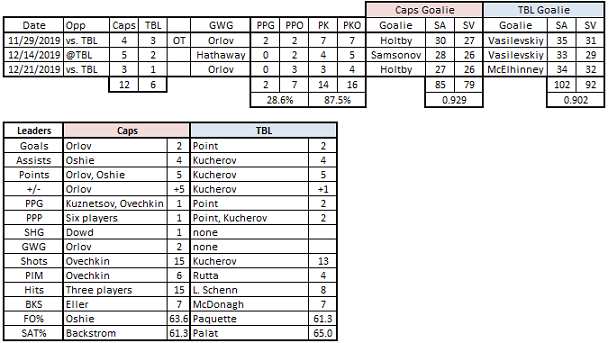 Who to watch for the Lightning…

Fun Facts in the Season Series…
And so the Capitals, 21 weeks to the day since their last game played in anger, will resume their quest to hoist the Stanley Cup.  In the first of what will be the oddest set of tournament games ever played in the NHL…