“The best work is not what is most difficult for you; it is what you do best.”
-- Jean-Paul Sartre

On New Year’s Day, a story in the Washington Post carried this headline…

One could hardly be blunter than this with respect to assessing a player’s role with his club.  One could hardly be more correct, though.  Two coaches – Adam Oates and Barry Trotz – tried employing Beagle on the top line with the two offensive drivers, and a third – Dale Hunter – experimented with giving Beagle minutes once claimed by Ovechkin.

Whatever Jay Beagle’s virtues are as a player, and he does have virtues (we will get to that), being top-line worthy is not among them.  Beagle is a player of modest origins who has worked hard to climb into a regular spot in an NHL lineup.  It does not make him Corey Perry.

However, a curious thing happened in 2014-2015.  Jay Beagle, heretofore a grinder – a player who took mostly fourth line minutes, whose contributions were in the unseen things (faceoffs, defense, working along the edges) – became a timely contributor at the offensive end of the rink. 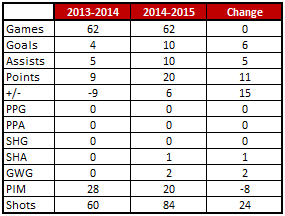 Fearless’ Take: A total of 62 games, 10 goals, 10 assists, and 794 minutes played.  Jay Beagle was the only player in the NHL this season to put together than combination of more than 60 games played, fewer than 800 minutes logged, and double digits in goals and assists.  Had he qualified, Beagle would have finished seventh in the league in faceoff winning percentage, just behind Jonathan Toews (56.51 percent to 56.53 percent).  And if going to the bakery is a prerequisite if you want bread, then Beagle had his nose pressed to the display case.  His average shooting distance (23 feet) was the shortest of any Capital in 2014-2015.

Cheerless’ Take:  Let’s not make too much of that “Beagle Effect,” cuz.  He missed 20 games this season, and the Caps were 12-6-2 in those games. He shot to a career high 11.9 percent, almost four percentage points higher than his previous best season playing more than ten games (8.2 percent 41 games in 2011-2012).  His Corsi-for percent/relative at 5-on-5 was a minus-1.6 (numbers from war-on-ice.com).  Like you numbers guys like to say, one season does not make a trend.  There were parts of it to suggest the rest of it was more “outlier” than “improvement.”

Odd Beagle Fact:  Ten goals in his last 54 games of the season were as many as he compiled in his previous 183 games covering parts of five seasons, including the first eight games of this season.

Game to Remember: February 11th versus San Jose.  West coast road trips have historically been hard on the Capitals, and there has been no place harder to find success than in San Jose.  When the Caps beat the Sharks, 3-2, in a Gimmick on March 22, 2014, it was their first win in San Jose since October 30, 1993.  What is more, the Caps had not scored more than two goals in the hockey portion of the contest on the Sharks’ rink in seven consecutive games, dating back to a 5-4 loss at San Jose in March 2002.  On this night, Jay Beagle would take care of the two goals by himself. He opened the scoring late in the first period when a Brooks Orpik shot from the left point rebounded off the skate of defenseman Matt Tennyson and onto the stick of Beagle darting into the low slot.

With San Jose holding a 3-2 lead mid-way through the third period, Beagle struck again, this time taking a long lead pass from John Carlson, who fired the pass from behind the Capitals’ net, at the San Jose blue line.  He curled in from the right wing and got behind the Sharks’ defense (with the help of a linesman, who got tangled up with a San Jose defender inside the blue line), then deked goalie Antti Niemi to his stomach, sliding the puck under the goalie’s extended right pad.

The teams exchanged goals barely three minutes after Beagle’s second strike to force overtime.  In the extra session it was a case of being perhaps more lucky than good.  Joel Ward carried the puck into the San Jose end on a 3-on-2 rush.  He dropped the puck for Beagle skating down the middle, but Beagle could not gain full control.  He had enough, though, to ease the puck over to Mike Green who fired a shot saved by Niemi.  Ward was all over the rebound, though, and buried the loose puck in the back of the net to give the Caps a 5-4 win and Beagle his first three-point game in the NHL.

Game to Forget: December 2nd versus Vancouver.  The Caps spent the first two months of the season hanging around the .500 mark.  The opened December just one game to the good of .500 when the Canucks came to town.  Vancouver opened the scoring late in the first period, in part because Beagle could not quiet a bouncing puck in his own end.  Jannik Hansen took it off his stick, fed it to Bo Horvat, who relayed it to Derek Dorsett for the goal.  The teams were tied, 3-3, in the third period when the Canucks went on a power play mid-way through the frame.  Henrik Sedin went to fetch the puck in his own end and circled up ice.  As he crossed the red line he found his brother, Daniel, with a pass that eluded Beagle’s stick.  Daniel took a step in and fired a shot that beat goalie Braden Holtby over his glove to provide the final margin in a 4-3 Canucks win.  Beagle was on ice for the first and last goals, took a hooking penalty of his own, and ended the night skating a season low 6:34 in ice time.

It is nice that Jay Beagle continued his scoring pace in the postseason (five points in 14 games).  It is less so that he – a fourth liner – would finish sixth in points among Capital forwards in the playoffs.  What he was not able to do was sustain his shooting touch.  One goal on 24 shots – a 4.2 percent shooting rate – was a coming back to earth of sorts.  He was hardly alone, though, since the Caps as a team shot just 6.3 percent for the post season.

For a player who took the road Jay Beagle traveled to get to the NHL (undrafted, free agent signing, not seeing his first NHL action until age 23, appearing in more than half the team’s games for the first time in 2012-2013), a year like this qualifies as a pleasant surprise, with emphasis on the word, “pleasant.”  In the cold light of reality, it also seems likely to be a high-water mark in his career.  Ten goals on 84 shots (11.9 percent) for a player with a 6.3 percent shooting percentage coming into this season seems the sort of result not likely to be replicated.  At least that is what his history suggests.

That is not to say that Beagle is not a better player than he was when he broke into the league in 2008-2009, or even that he is not a better player than he was in the 2013-2014 season.  But sustaining what was a 13-13-26, plus-8 pace per 82 games over multiple seasons?  That might be a bit too much to hope for.  It will make for an interesting off-season for Beagle and the Caps as the player tests free agency (if he does not re-sign with the Caps before July 1st).

There will be the temptation to think Beagle is, if not the first line player other coaches tried to make him, if only for a time, then a player who could fill a third line role on a regular basis.  That might not be what works best for Beagle or the Caps.  In this season, we saw more of what he did best, giving the team honest and productive minutes in a fourth line role.