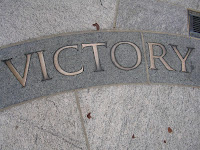 It was everything a Cap fan could have hoped for. From the endless pre-game Penguin homage that could get Capitals Nation in an ornery mood, to the early territorial advantage the Caps had to the storming back from a 1-0 deficit as the storm raged on, to the anticlimactic fight, a desperate wheeze of spent passion from a team beaten in its own show, the Caps skated off with the Winter Classic win for 2011, beating the Pittsburgh Penguins, 3-1, in front of 68,111 at Heinz Field.

Up until the drop of the puck, the story of this game was the weather. It delayed the game seven hours; it loomed over the production causing fans, if not the NHL ice managers, to wonder if the ice would hold up under the relentless barrage of rain that was looming as a possibility.

But when the puck dropped, it was first, next, and last, a hockey game. And if anything, it was a much more offensive game than one might have expected in the conditions. The first period featured 28 shots on goal from the two teams, 16 by Pittsburgh. None of those shots solved goaltenders Marc-Andre Fleury for the Penguins or Semyon Varlamov for the Capitals.

In the second period the Caps would have the best of the play early, Alex Ovechkin having two glorious chances, one on a breakaway and the other on a wide open shot from the slot, both of which were turned away by Fleury. As happens so often with these teams, the Caps fail to cash in on multiple chances, and the Penguins turn around and convert the first opportunity they get. This one came in the form of a breakaway for Evgeni Malkin that he converted by beating Varlamov five-hole to give the home team the first goal. It would be the high point for the Penguins for the evening.

Less than five minutes later, with Max Talbot off for hooking, Mike Knuble got the sort of goal he gets and one to be expected on a raw night like tonight, jabbing at a loose puck in front of Fleury and poking it through his pads from the top of the crease to tie the game.

The teams traded chances over the next eight minutes, but then the Penguins – specifically Fleury – made a ghastly mistake. Fleury circled behind his net to play a puck that was dumped in. When he tried to play the puck with his stick, he whiffed, and Marcus Johansson was johnny-on-the-spot to get the puck to Eric Fehr in front. Before Fleury could scramble back in front of his net, Fehr buried the snap shot, and the Caps had the lead they would not relinquish.

Fehr would cement the win by finishing a play started by, of all people, John Erskine. It was Erskine, behind his own net, who sent a pass up to Jason Chimera, who then relayed the puck in stride to Fehr at the Pittsburgh line. Fehr outraced Penguin defenseman Paul Martin into the zone and snapped a wrist shot past Fleury to provide the insurance goal.

-- It figures that on a night when the elements were always lurking in the background, making things difficult, the stars didn’t have the sort of game folks might have hoped for. Neither Alex Ovechkin nor Sidney Crosby recorded a point, only the third time since they came into the league that neither registered a point in a Caps-Penguins game.

-- Streaks… two in a row for Crosby not registering a point after his 25-game points streak. And, the Caps are now 8-0-2 in the last ten regular season games in this series. Both losses came in shootouts.

-- Each team had a goal waved off, and from our seat high above Heinz Field, both were the right call. Mike Rupp gave Semyon Varlamov a rather substantial shot as Varlamov was trying to make a save. That was the easier of the two calls to make. On the other, Alex Ovechkin had a goal waved off after he got tangled up with Fleury behind, then in front of the net. That was what NBA folks might have called a “continuation” play. Ovechkin and Fleury got tangled up behind the Penguin net, and it appeared for a moment that each player was trying not to pull the other one down. They finally disengaged in front of the Penguin net, but Fleury did not have a reasonable opportunity to defend his own net when Ovechkin finally shook himself loose to put home a loose puck. It was the right call.

-- So was the no-call on David Steckel hitting Sidney Crosby late in the second period. Neither player had a stake on the position they were vying for; in fact they were going in different directions. Crosby had the disadvantage of having his back to the play when he crossed Steckel’s path. He did not have the same opportunity to defend himself he might have had if he was facing the play, and the result was that Crosby got his bell rung a bit.

-- What is with the Penguins and handshakes? First there was the whole Red Wings thing a couple of years ago, tonight it was skating off without the handshake line. We think the whole Winter Classic handshake is nonsense, it being a regular season game. But the Penguins just looked as if they wanted to do anything but do handshakes. Guess that’s part of the whole hate thing that seems to run through this series.

-- Eric Fehr isn’t the fastest skater in the league. He is far from the fastest skater on the Caps. But we don’t see many guys catching him when he gets a step, either. We’re guessing that’s part of the whole goal-scorer’s mentality when the opportunity presents itself.

-- For the second straight Caps-Penguins game an Alex Ovechkin hit set a tone. In the first one it was a hit on Evgeni Malkin that had the Penguins lining up to take a shot at him. Tonight it was a hit on Zbynek Michalek that knocked a pane of glass loose in the Pittsburgh end, calling to mind a similar check on Ovechkin’s first shift as a pro.

-- If Ovechkin’s check set a tone, John Erskine’s fight with Mike Rupp provided an emphasis to the theme that these teams do not much like one another.

-- Just as he did in the first meeting, Mike Green led the Caps in hits (five).

-- If there was an odd part ot Eric Fehr’s two-goal night it was that he did it in only 9:55 of ice time. What’s more, he skated only 14 shifts, six of them in the first period. Two goals in his last eight shifts totaling 6:00.

-- After getting those 16 shots in the first period, the Caps allowed the Penguins only 17 over the last two periods.

-- As the game was moving through the third period, and the Caps were nursing a one-goal lead (then two), it was nice to see all of the guys buying into the notion of getting pucks deep and making the Penguins work through all 200 feet of ice. And then it was the Penguins having to resort to stretch passes along ice that was deteriorating in a steady rain at the end.

-- Part of winning is not making mistakes that put you in a position (or out of position, in the case of Marc-Andre Fleury) to lose. Jay Beagle and Mathieu Perreault didn’t make mistakes. They played their roles so well. Even if either or both get sent back to Hershey, both have played well with the big club.

-- The uniforms looked spectacular on the Heinz Field ice. They ought to be the Caps’ third, or at least brought out from time to time.

-- What is with Pittsburgh and troughs? The men’s room at Mellon had ‘em, and so does Heinz Field. I actually thought I heard mooing in there.

-- We kid…Pittsburgh put on one helluva show. It really is an underrated city, and they clearly take their sports seriously. But in producing this, the NHL’s biggest regular season game, the city should be proud. One hopes DC will get to return the hospitality.

-- Eric Fehr might have gotten the first star, but let’s face it…the star of this game was Dan Craig. He is to ice what George Toma has been to sports turf. That the surface was as playable as it was, and that (according to one report we read) it actually improved over the course of the game, is testimony to the great job and hard work put in by Craig and his team.

-- And weren’t the Caps fans in attendance something? One estimate had the Caps contingent pegged at 30,000. It was nice to see Caps fans take over an arena the way it had been done to them by a lot of teams over the years, especially when that arena seats more than 68,000. And there was no better sight for Caps fans than to see a steady stream of blue heading for the exits with five minutes left.

In the end, it’s two points, yeah. But sometimes two points are more than two points. And the two points the Caps earned tonight make them 5-0-1 in their last six after losing eight in a row. Four teams are now bunched within two points of one another at the top of the Eastern Conference. And the Caps can do something about that on Tuesday when the Tampa Bay Lightning – currently leading the Southeast Division – come to town. But let’s savor this one just a bit longer.
Posted by The Peerless at 1:55 AM 5 comments: