The Peerless Prognosticator is ON THE AIR!!! -- Game 10: Capitals at Blackhawks, October 20th

The Washington Capitals head on the road to close the weekend with a Sunday evening matchup in Chicago against the Blackhawks.  The Caps won a second consecutive game on Friday night, beating the New York Rangers, 5-2, to match their longest winning streak of the season (they won their first two games of the season).  The Blackhawks have also won two in a row, besting the Edmonton Oilers and Columbus Blue Jackets (the latter in overtime) after opening the new season with three straight losses, one of them in overtime.

Duncan Keith has the awards – two Norris Trophies as the league’s top defenseman, one Conn Smythe Trophy as most valuable player in the playoffs, four all-star game berths, two-time first team NHL All-Star – but his career numbers and that of fellow defenseman Brent Seabrook (who has only the 2015 All Star game on his awards list) are almost indistinguishable in where they rank in their respective careers with the Blackhawks.  The rank 1-2 in games played by defensemen in team history (Seabrook: 1087/Keith: 1082), third and fourth in goals by defensemen (Seabrook 101/Keith 98), second and sixth in assists (Keith 487/Seabrook 360), second and sixth in points (Keith 585/Seabroook 461), sixth and ninth in plus-minus (Keith plus-159/Seabrook plus-110), 11th and 15th in penalty minutes (Seabrook 657/Keith 609), and game-winning goals (Seabrook 18/Keith 17).  Both are in their 15th seasons with the club, joining Bob Murray as the only defensemen in team history to skate 15 seasons.  Neither have been especially productive through five games, but typically, through five games for each player they are tied in penalty minutes (four), power play points (one), and are separated by just one shot on goal (six for Keith, five for Seabrook).  Keith is 1-8-9, minus-6, in 17 career games against the Caps, while Seabrook is 1-4-5, plus-4, in 17 career games against Washington.

Corey Crawford almost certainly will not be the top-ranked goalie in team history in any major category, but when the two ahead of him in most categories are hall of famers Tony Esposito and Glenn Hall, that is good company nevertheless.  Crawford trails only those two netminders in career games for the club (451), minutes played (25,956), and wins (245).  He is the all-time leader in goals against average (2.42) and save percentage .918, minimum: 100 games).  However, he has been prone to injury in recent years.  In 2017-2018 he missed the last 47 games of the season with an upper-body injury, while last season he lost 33 games to two different bouts with concussions.  It limited Crawford to only 67 appearances over the two seasons, even as his numbers in those limited appearances were rather good for a struggling club (30-27-7, 2.66, .917, with four shutouts).  He is not off to a very good start this season, posting a 1-2-0, 3.40, .900 record in three appearances.  Given that Robin Lehner, signed away from the New York Islanders last summer, stopped 37 of 39 shots in the Blackhawks’ 3-2 overtime win over Columbus on Friday night, Lehner might get the nod here.  Crawford is 3-5-2, 3.61, .881 in 10 career appearances against the Caps.  Lehner is 2-3-1, 2.17, .927, with one shutout in his career against the Caps. 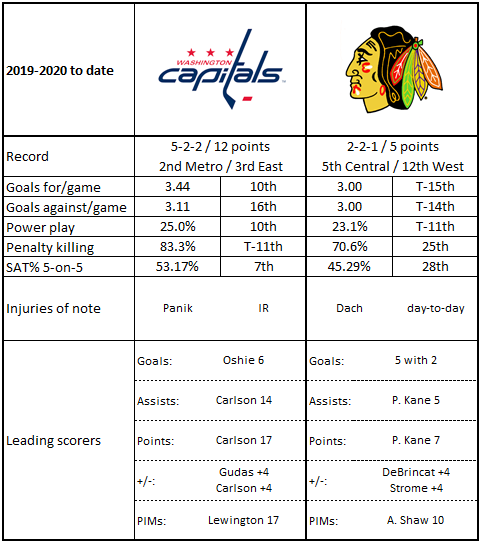 1.  Zach Smith, in his first year with Chicago after spending his first 11 seasons with the Ottawa Senators, is the only skater among 15 having dressed for all five games so far without a point for the Hawks.

2.  Chicago will give up shots.  The 34.4 shots allowed per game are second most among Western Conference teams (Colorado: 35.1).

4.  In the “it’s early” department, the 70.6 percent penalty kill through five games is the worst for the Blackhawks since 2005-2006. Then again, the 72.7 percent they posted for all of last season is second worst.  This just might not be a very good penalty killing team.

4.  Michal Kempny scored a goal in his first game back from injury.  He is one of three Caps defensemen with a goal.  John Carlson (three) and Dmitry Orlov (one) are the others.

5.  The Caps had a 66.67 percent shot attempts-for at 5-on-5 against the Rangers on Friday.  It was the second-highest SAT% for a single game over the last three seasons, topped only by the 68.42 percent that the Caps recorded in a 3-1 win over the New York Islanders last March 1st.

When defenseman Olli Maatta broke in with the Pittsburgh Penguins in 2013-2014, went 9-20-29, plus-8, in 78 games, and finished fifth in the Calder Trophy voting for top rookie, the road to a long and productive career seemed laid out before him.  By last season, his sixth with the Pens, in which he was 1-13-14, plus-9, in 60 games (the third season in six in which he missed at least 20 games), he looked like a player who needed a fresh start.  The Penguins must have felt the same way, trading him to Chicago for center Dominik Kahun and a fifth round draft pick.

Unfortunately, it is the absences that seem to have defined Maatta’s career to date.  There were a thyroid problem, a shoulder injury, and mumps in his sophomore season in 2014-2015 that limited him to 20 games, 15 games lost to two injuries in 2015-2016, 27 games lost to a hand injury and illness in 2016-2017, and 21 games lost to a shoulder injury last season.  The injuries have conspired to make that rookie season his best among the six seasons he spent in Pittsburgh.  And now, at 25 years old, he makes a new start.  It has not been a rousing start, but he has dressed for all five games so far and posted an assist while averaging more than 17 minutes per game.  It is his lowest average ice time in six seasons, but at this point Maatta is a renovation project.  He is 1-8-9, plus-6, in 19 career games against the Capitals.

When Jakub Vrana opened the season with a game-winning goal in the opener and another goal in his next game, both of them in wins, those who predicted he would have his first 30-goal season this year looked good.  Then, the Caps started losing, and Vrana’s production fell off.  He went five games without a goal, and the Caps went 1-2-2, suggesting that his brand of secondary scoring was an important ingredient to the team’s success, and when it was absent, the team faltered.  His ice time dropped off, too.  After averaging 16:47 over his first three games (he had an assist in that third game to open the season on a three-game points streak),  he averaged just 11:49 over his next four games, posting a single assist in the process.

Vrana rebounded with a goal in the Caps’ 4-3 win over Toronto on Wednesday, posting a personal season high of six shots on goal in 13:50 of ice time.  Although he went without a point in the Caps’ 5-2 win over the New York Rangers on Friday, he posted another four shots on goal for his high shot mark over any two consecutive games so far this season (ten).  Looking at things from another perspective, though, his goal scoring to open this season (three in nine games) is not much different from last season (three in his first 12 games) or the season before that (three in his first 16 games).  Given expectations, though, that pace will have to pick up.  Vrana is 0-2-2, minus-2, in three career games against Chicago.

The Caps shut out the Blackhawks in Chicago, 4-0, back on February 15, 2004.  Since then, in nine visits to Chicago, the Caps have are 3-6-0 and have been pummeled by an aggregate score of 41-24.  The Caps have allowed five or more goals five times in those nine games, including 15 goals over their last two visits.  They have been outshot, 297-246, and killed only 20 of 28 shorthanded situations (71.4 percent penalty kill). There is little mystery here.  The Caps have to do a much better job buttoning down their own end than they have in their recent trips to United Center.