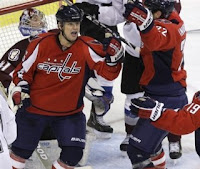 Theme: “I do one thing at a time, I do it very well, and then I move on.”
-- Maj. Charles Emerson Winchester, III, MD, 4077th Mobile Army Surgical Hospital

(click pic for larger image)
You have reached the pinnacle of your profession when your signature talent has attached to it a nickname. In baseball, the fastball of hall of fame pitcher Nolan Ryan was branded, “The Ryan Express.” In basketball, Kareem Abdul-Jabbar took the hook shot and made his own “sky hook.” A lot of soccer players can make a ball do tricks, but David Beckham is the rare player who could have his talent memorialized in a movie titled “Bend It Like Beckham.”

Which brings us to Matt Hendricks. By day, according to the Capitals media guide, Hendricks enjoys golfing and fishing. His favorite athlete is Phil Mickelson. His first car was a 1978 Dodge pickup truck, and his first job was working on a sod farm. A down-to-earth, plain-living, hard-working sort of guy. But by night…

Matt Hendricks did not lead the league in trick shot goals (he was tied for 15th with five goals). He had only one game-deciding goal. But among players taking at least five tries as solving a goalie in the trick shot competition, no one converted a greater share of his attempts than did Hendricks. In six tries, he scored five goals, all of them accompanied by “The Paralyzer”… the kick of the right leg as he reaches the circles. That kick, perhaps just for a moment, froze goalies who then seemed to lose track of the moves that came next – and often there were many. It made for a discombobulating cacophony of contortions that five times in six had the desired effect.

But there were 65 minutes of hockey that preceded those outcomes, and much more often 60 minutes. In those mundane instances Hendricks was more the guy driving his pick up to work on a sod farm. That is the life of the fourth-liner in the NHL, a guy who provides energy, a physical edge, and the occasional goal. It is unglamorous, but it is essential to the health and success of a hockey team. The well-timed hit, the standing up for his team or a teammate, the unexpected lightning of the lamp. All of it can provide the lift a team needs to win on any given night.

How did Hendricks do in this regard? Well-timed hit? He had 219 hits in all, so volume was not a problem. That total was tied for 18th in the league (with rookie Gabriel Landeskog, if you can believe that). And the frequency was impressive. Here is a comparison. Alex Ovechkin – no shrinking violet himself – recorded 215 hits. Hendricks recorded his 219 hits in 599 fewer minutes of ice time. Put another way, Hendricks recorded one hit for every 4:19 of ice time. Ovechkin, one hit for every 7:11 of ice time.

Standing up for his team or a teammate? He had 11 fights in the regular season. The hockeyfights.com Web site had him at 5-3-3 in those decisions, but more important, the Caps were 4-7-0 in games in which Hendricks took a fighting major – that “standing up” thing goes just so far. He led the team fighting majors, and by a wide margin (Troy Brouwer had five) on a team that did not engage much in the practice. Only four teams had fewer fights than did the Caps (26).

How about the unexpected lighting of the lamp? This is where Hendricks season took a turn into a dimly lit, if not dark alley. When he was signed by the Caps for the 2010-2011 season, he was coming off a nine-goal year in Colorado in which he converted those nine goals on just 63 shots – a 14.3 percent shooting percentage. In his first year with the Caps he matched that nine-goal total and did so on 113 shots (8.0 percent).

In 2011-2012, however, Hendricks saw his goal total cut by more than half – to four in 78 games – and his shooting percentage drop to 4.1 percent, worst among all Capital forwards save for D.J. King and Joel Rechlicz, who combined for a total of one shot on goal (by King, without success) in four games. And keep in mind, Hendricks might have been a “fourth liner,” but he did not necessarily shoot like one, at least in terms of volume. His 97 shots on goal were sixth among forwards, more than Mike Knuble, more than Marcus Johansson, more than Joel Ward, and more than Mathieu Perreault (who played in only 64 games but had 16 goals, too). Here is how his numbers compare to last year’s: 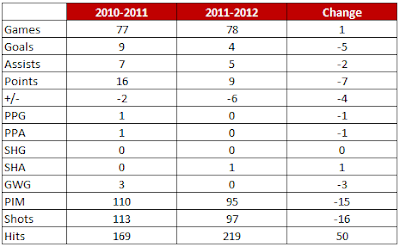 Odd Hendricks Fact… All four of Hendricks’ goals for the season came on the road, three of them coming against Northeast Division teams (Buffalo, Montreal, Boston).

Game to Forget… December 17, 2011. The Caps were trying to establish some momentum in their visit to Colorado to meet the Avalanche after winning a 1-0 decision in Winnipeg two nights earlier. They were 9-13-1 after a 7-0-0 start and had managed consecutive wins in regulation only once since that hot start. In this one, Colorado scored first on a goal by Cody McLeod just 2:49 into the game. Later in the period Hendricks tried, as he said, “to get some momentum for the team.”

He did that by picking a fight with friend and former teammate McLeod as the Caps were about to be whistled for a penalty to Mathieu Perreault. It did not go well. McLeod landed a dozen or so right hands. Hendricks couldn’t get free to throw, let alone land a punch, and McLeod had his decision. The momentum Hendricks was trying to grab for the Caps eluded him and the team, and Hendricks finished the night with a season low 3:49 in ice time in the Caps’ 2-1 loss in Denver.

Post Season… Hendricks had a respectable post season. He hit (61, tops on the team in 14 games), he blocked shots (sixth among forwards, fifth in blocked shots per minute of ice time); he was responsible with the puck (two giveaways, second fewest among Cap forwards playing in at least ten games). He won 56 percent of the 116 draws he took. He was one of four forwards averaging more than two minutes a game in penalty killing. He took 23 more shifts in the post-season than did Alexander Semin, 55 more than Jason Chimera. He was all over the place…just not the score sheet. One goal on 22 shots…a 4.5 percent shooting percentage. It just was not his year scoring-wise, even for a guy whose scoring expectations are modest.

In the end… Matt Hendricks is a guy you root for. His engine runs at high RPMs just about every shift, and that he will try to do anything to give a lift to his team shines through on just about every shift. Teams win with guys like this. But you cannot say this was a good year for him or a step forward in his career arc. He was down in just about every performance number (goals, assists, points, plus-minus, shooting percentage) despite getting a bit more ice time this season (12:07 per game compared to 11:27 a game in 2010-2011). The Caps do not need a lot of production out of its fourth line, but getting more out of it was one of the hoped-for outcomes this season. It is not an afterthought (look at what it has produced for the finalists in this year’s playoffs). And it is in that light that one might have been thrilled by Hendricks’ curious success in the Gimmick, but one should not be paralyzed by it.