Caps fans got a real good dose of reality and a good look at why young guys should learn their trade in the AHL, not in an “on-the-job” training session at the NHL level.

The Florida Panthers – the Florida “Can’t hit the Atlantic Ocean with a shot” Panthers – scored five goals (some of them off their own sticks) in ending the Caps’ undefeated-in-regulation run at Verizon Center, 5-3.

It wasn’t as if the Caps played especially badly or that the Panthers were making anyone forget the 1978 Canadiens. It was just a weird game in which the Caps’ defensemen suffered an acute lack of communication and a singular inability to move the puck out of their own end with any consistency. Absent any success on either of those scores, it was merely a matter of time until the Caps would self-destruct.

That happened in the second period.

Ville Peltonen left Karl Alzner in a state of disrobement (his supporter being left somewhere near the top of the right faceoff circle) in skating at the defender, slamming on the brakes, taking a moment to allow Alzner to continue on his way, then snapping a shot over Jose Theodore’s shoulder to tie the game after Nicklas Backstrom scored a weird goal of his own off a Panther skate and underneath goalie Craig Anderson.

Alzner became the wrong man in the wrong place shortly thereafter when David Steckel tried to…well, we’re not exactly sure what he was trying, but what he did was fire the puck off of the skate of Alzner, who was standing in the slot, and underneath Theodore to give the Panthers a lead they’d never relinquish. Jay Bouwmeester, who might have been in the zone, but it isn’t certain, was credited with the goal. Payback, one supposes, since it was his skate that deflected Backstrom’s intended pass into the Florida net on the Caps’ first goal.

You getting the feeling this wasn’t going to be the Caps’ – or Alzner’s – night?

If that wasn’t bad enough, and let’s face it, it was, the Panthers got their third goal as a product of what looked like a Bryan McCabe shot that ricocheted off of Shaone Morrisonn, who was tied up with Rostislav Olesz in front of Theodore. That’s three goals, two off of Capitals. One might have had the feeling Theodore was going to walk right past the locker room at the intermission and take the elevator up to Dewars on the club level for a double, neat (leave the bottle).

The rest was details, although the Caps did make it interesting after Radek Dvorak gave Florida a 4-1 lead. Two goals in 51 seconds in the last five minutes of the third brought the Caps to within one, but justice was served in the form of an empty net goal for the final margin. Truth be told, the Caps had no business winning this game, and they didn’t.

You could call it injuries, you could call it the law of averages, you could call it fate, but this one is on the defensemen. True, Alzner had a gruesome night of bad circumstances, and Lepisto looked to be running around far too much. But it wasn’t as if Shaone Morrisonn or Milan Jurcina were making anyone forget Rod Langway, either. It was a game that made one pine for John Erskine. Oh, and Caps fans?...You can take your criticism of Jeff Schultz (you know who you are) and shove it where the sun don’t shine and the grass don’t grow. This game was an outstanding object lesson as to how Schultz has developed. Schultz might not hit like a freight train, but he doesn’t make the mistakes nearly as often as what was the case tonight (especially among the young guys) of chasing players and peeking around to find opponents.

The forwards chipped in with their moments of adventure, too. Nicklas Backstrom had an interesting night…six giveaways. The Panthers as a team had seven. A couple of times one might have thought Backstrom was passing to a teammate only he could see, in a manner of speaking. We’re not sure if he answered to the name of “Harvey.” All in all, though, Backstrom had one of the better evenings for the home team.

Michael Nylander looks like a guy trying to dance a waltz when the band is playing swing. It ain’t working.

We thought Eric Fehr would get one tonight, and he didn’t lack for opportunities. Three shots and a couple of others blocked, which isn’t bad for less than 13 minutes of ice time. We still think he’s close.

Alex Ovechkin might be able to leap tall buildings in a single bound, but trying to leap goaltenders that way just gets you two minutes for goalie interference.

How did Gregory Campbell not get a star? He was all over the Panther score sheet… a goal (ok, it was an empty-netter, but when Crosby scored one the other night, you thought he invented hockey with the way folks went on about it), an assist, plus-3, two shots, two hits, a takeaway, a blocked shot, and he won 11 of 18 draws. All in less than 17 minutes. He had a whale of a night for the Panthers.

OK, the Caps came into this one beat up and played poorly on top of it. I know, you know, the coaching staff knows, even those moonyoks voting a hundred thousand times a day for Habs players know that the Caps are better than this. They will do better. It is not as if this is a systemic problem. It is a loss and the type of game that is correctable, mainly by getting some guys back onto the ice.

If nothing else, it serves to illustrate why it is a guy like Karl Alzner will benefit more from a full year in Hershey than he will getting thrown into the deep end of the pool at this stage of his career. Ditto for Lepisto, who could still benefit from that time up Route 15. And maybe it will silence those folks who look at, say, a two goal night from an Oskar Osala or a three point night from a Francois Bouchard and think they can step in at this level and not miss a beat. Their days – Alzner, Lepisto, and the other Bears – are coming, but they’re not here yet.

The adrenaline the kids might have played with as they stepped into the lineup appears to have burned off, and the rest of the Caps didn’t have their finest moment tonight. This is what happens to a team missing big parts of its offense and defense. The trick is to hold the fort until folks get healthy.
Posted by The Peerless at 11:01 PM 2 comments: 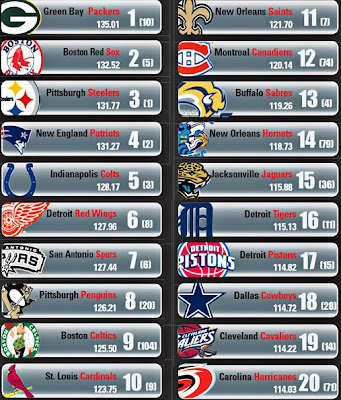 Sports Business Journal (subscription required) published the results of a brand index assembled by Turnkey Sports and Entertainment. Fans rated 122 teams on 21 distinct factors, including how fans perceive entertainment value, how well they like the players, perceptions of ownership, and the team's commitment to winning. The study also tested each team on 36 brand attributes. The results in that "top-20" graphic above might strike some as a bit surprising.
Five hockey teams out of the top 20?...Carolina among them?
And three of the top 17 teams coming from Detroit?
Posted by The Peerless at 2:58 PM 4 comments: 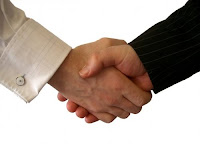 No, not 'til Christmas...'til the trade freeze that begins on December 19th.
Any hot deals you see coming?
And no, Dainius Zubrus for Jan Hrdina does not count.
Posted by The Peerless at 10:22 AM No comments:

Email ThisBlogThis!Share to TwitterShare to FacebookShare to Pinterest
Labels: trades

As Tarik El-Bashir points out in this morning's column about the Caps in the Washington Post, there could be seven players sitting out tonight's game who were in the starting lineup on Opening Night, including their top scoring defenseman and the forward who was the team's top scorer when he went down.

If there is a silver lining in this, a part of it was noted by the folks over at OFB a couple of days ago. Having the same system and philosophy being practiced in Washington and Hershey is helpful in situations such as these.

But there is another element here. The call-ups have left Hershey having to scramble a bit to fill their own missing pieces as players are called to Washington. This is perhaps a more normal circumstance for teams in the AHL, where players move up and move on with more regularity than is often the case in the NHL. Coaches have to be adept in rolling with the personnel punches, be they thrown by a rash of injuries or just the normal course of player movement.

It that respect, the Caps are lucker than most teams might be for who they have behind their bench. Bruce Boudreau, who has paced behind many an AHL bench, has no doubt seen this kind of personnel jostling before. As was noted in the article, "Boudreau was attempting [through some of his comments] to bring some levity to a situation that has the potential to become no joking matter." It is no joking matter, but it neither is it entirely foreign to the head coach. The circumstances might be different -- injuries being the cause of the turnover -- but if there is a coach who seems equipped by temperament and experience to deal with it successfully, it would be Boudreau.

Still, it would be nice to see some healthy bodies returning soon.
Posted by The Peerless at 6:49 AM 1 comment: