The Peerless Prognosticator is ON THE AIR!!! -- Caps vs. Lightning, November 11th


“Gee, cuz, we thought you went off to join a monastery or somethin’…
“Doofus over there was eyeing your chair, cousin.”
Really, Cheerless was going to take over the blog?


“That he was.”
“Had a great new name for it, too.”
Oh, please, don’t build the suspense. What was the name of this new blog of yours?

Well, with all due respect to the “chugnosticator,” we’ll take over here. As for tonight, the Caps return home from a day trip to New York, where they defeated the Rangers on Tuesday by a 5-3 margin. The Caps host the Tampa Bay Lightning in a battle of teams vying for the top spot in the Southeast Division.

The Lightning got off to a hot start, going 5-1-1 in their first seven games. But in the seven games since then Tampa Bay has cooled some, posting a 3-3-1 record and finding themselves struggling with inconsistency on both sides of the ledger. The overall numbers for Tampa Bay and the Caps look like this (before last night's action)… 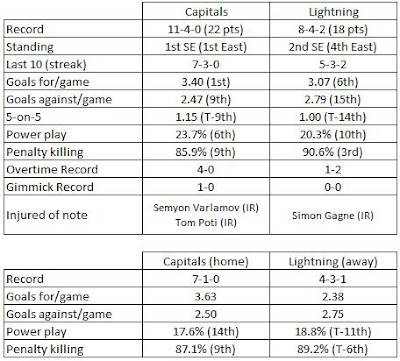 The two seven game halves of the season for the Lightning so far are a tale of two different teams:

And that brings us to Steven Stamkos. Now in his third season in the NHL, Stamkos’ ascent as a goal scorer has been meteoric. From a respectable 23 goals in his rookie season, he jumped to 51 last year, good enough to earn him a share of the Rocket Richard Trophy as the top goal scorer in the league. The 13 goals he has in 14 games so far puts him on a pace for 76 goals this season.

Of the 13 goals Stamkos has scored so far, six of them are on the power play, and he has three of the four man-advantage goals the Lightning have scored in their last seven games. It is part of a five goals in five games run he brings into tonight’s game against Washington. He started hot, and he has remained hot through both “halves” of the Lightning season to date. He failed to record a goal in consecutive games only once so far through 14 games, although he did have four assists in those games. In 12 career games against the Caps Stamkos is 7-2-9, and that includes a 4-2-6 line in six games last season.

As for the rest of the team, there is a narrative that Martin St. Louis is Stamkos’ personal set up man. Well, the facts don’t really reflect that, at least not so far this year. Of Stamkos’ 13 goals, St. Louis has assisted on four of them. But St. Louis is quietly assembling quite a scoring line of his own. In 14 games he is 6-9-15 and has recorded at least one point in 11 of the 14 games in which he has played to date. He has been a long-time nuisance to the Caps, bringing a 21-37-58 scoring line in 56 career games against Washington into this contest.

The canary in the coal mine in terms of the drop in Lightning goal scoring lately is reflected in the numbers for Teddy Purcell. The right winger started his first full season with Tampa Bay (he came to the Lightning from Los Angeles last season) with a bang, recording five assists in his first six games in about 13 minutes of work a night. Since then, though, he has one goal and one assist in eight games. The flip side of that is the fact that Purcell assisted on both goals Sean Bergenheim scored in the first six games. Bergenheim has one goal since then. Purcell also assisted on two of the goals Dominic Moore scored in the first five games, but then Moore missed five games with a groin injury and only came back in the last Lightning game (a 4-0 shutout of Toronto). Purcell’s lack of helpers lately reflects a drop in scoring on the lower half of the forward lines.

On defense the Lightning have had, if anything, more of a mix-and-match lineup than have the Caps. Nine defensemen have dressed for Tampa Bay so far this season, only four of them dressing for every game. One of those defensemen is Pavel Kubina, who returns to the Lightning after spending the last four seasons skating for Toronto and Atlanta. Kubina started his career with Tampa Bay, playing for eight seasons with the Lightning, one of them ending in a Stanley Cup championship. He is not generally known as a big scorer, but he is without a point in his last five games. He is a minutes eater, though, ranking second among Lightning defensemen in average ice time. In 53 games against the Caps in his career he is 3-17-20.

You would be hard pressed to find two goaltenders who got to four wins in more different ways than have the Tampa tandem of Dan Ellis and Mike Smith. Ellis is 4-2-2, 2.11, .924, with two shutouts so far. He is 3-0-1 in his last four appearances, holding three opponents without a goal (shutouts against Toronto and Phoenix, and holding Pittsburgh without a goal for the last 47:43 in relief of Mike Smith in a 5-3 win over Pittsburgh). Smith, on the other hand, is 4-2-0, but has a GAA of 3.42 and a save percentage of .881. In his four wins the Lightning scored an average of 4.75 goals per game. In his two losses Tampa Bay scored a total of two goals and was shutout once. Those two losses came in his last two appearances. You would think that Ellis would get the call in this one. If he does, extra time might be in the cards. In four career appearances against the Caps he is 0-1-3 with a 2.92 GAA.

In 24 career games against the Caps Malone is 5-9-14. Not bad, but not great, either. The problem is that last season he failed to record a point in four games against Washington and was a minus-5. The Lightning would like him to get back to where he was the first two years he skated for the Lightning against the Caps (3-5-8 in nine games). He is currently riding a 12-game streak without a goal and has only one goal for the season.

Gordon averages more penalty killing ice time than any other Capitals forward (2:48/game). He is likely to draw the primary assignment of keeping Stamkos and his fellow power play travelers in check. That is going to be an important chore, for Tampa Bay is 6-1-1 when scoring a power play goal.

1. More Power. No, not Tampa Bay’s power play… Washington’s. And this applies to opportunities. The Lightning have allowed the fifth highest number of power plays on the road in the league so far, and with the Caps’ power play starting to spin up to form (8-for-21 over the last five games – 38.1 percent), taking advantage of Tampa Bay’s tendency to allow power plays is something to watch.

2. Trail after one? Maybe, but not after two. The Caps have the best record in the league when trailing at the first intermission. In fact, they are the only team with a record over .500 in that situation (7-3-0). But the fact is, no team in the NHL has a .500 record when trailing after two periods. So even though the Caps have the fourth best record in the league when trailing after 40 minutes, it is still a losing proposition. I also bears noting that neither team has lost when carrying a lead in to the first intermission, and neither team has lost when leading after 40 minutes.

3. Jump start. The Caps have been outscored 16-7 in the first period this year. They have allowed the first goal of the game 11 times in 15 games. If the Caps are to put Tampa in their place, it would help if the Caps didn’t allow first period goals that would give the visitors a heightened sense of confidence.

In the end, this is a benchmark game for Tampa Bay, not the Caps. It is the Lightning that have something to prove here, that they can compete with the Caps. Goalie Dan Ellis more or less confirmed this attitude:

"They're the team to beat in the East. Between them, and Philly and Pittsburgh, those three teams have been the marquee teams in the East the last three years. To match up against those teams is going to be big. We're going to have to bring our 'A' game."

If it is the Caps who bring their “A” game, they win. They are deeper, have better defense, and they have solved Ellis enough over his career to keep him winless against the Caps. But this isn’t a walk-over game, and if the Caps come out flat early, thinking that it is a walk-over, the evening is not going to go well for the home team. But at the moment, the Caps are the best team in the league, and there is little reason to think that they will succumb to taking the Lightning, well… lightly.