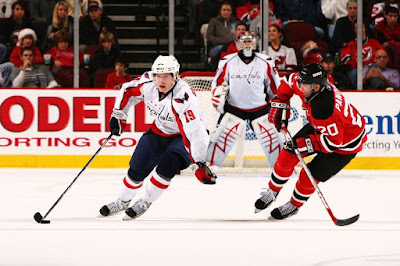 As has been the case from time to time in this space, we like to divide elements of the season into “chewable bites.” That means taking a look at players and the team “by the tens.” We look back on the 2008-2009 season in ten-game bites, starting with the players.

Backstrom certainly had the opportunity to be the latest victim of the “jinx,” and if you look at his performance by the tens, he started off the season as if he might in fact be that latest victim…

After an opening night assist in Atlanta, he would go another five games without a point and would finish his first ten games with a sluggish 0-4-4. And, that would include no even strength points, all of his assists coming on the power play.

After that, though, Backstrom had an extremely productive 30-game stretch that coincided with perhaps the most productive stretch for the Caps of the 2008-2009 season. From November 4th through January 3rd, Backstrom scored 11 of his 22 goals for the season and registered 29 of his 66 assists. His 11-29-40, +6, went a long way toward the Caps’ 21-7-2 mark over those 30 games.

There were two aspects of his play that reflected perhaps the experience he gained in his rookie year. First, his shots were up by 21 over his rookie year. It might no sound like a lot – about a quarter of a shot on goal per game – but it was almost a 14 percent jump. It was reflected in an eight-goal increase over his rookie total (from 14 to 22), even as his shooting percentage improved (from 9.2 to 12.6 percent).

If anything, that goal scoring number might yet increase in the years to come. It is worth noting that Backstrom scored 14 of his 22 goals on the power play, good for third on the team behind Alex Ovechkin (19) and Mike Green (18). He had fewer even strength goals this year (eight) than last (11). With experience, that even-strength goal number might grow. He could be a 25-30 goal scorer, but given the nature of his game – more of the traditional playmaker – that might be the upper limit of his goal-scoring production.

And in that playmaking vein, it is also worth noting that Backstrom raised his assist total by 11 from his rookie year. What might be a bit disappointing in that is that he had his best 10-game stretches early in the season, putting up 12 assists in the ten games from December 13th through January 3rd, and 11 assists (a mark that would be tied later) in the ten games from November 4th through November 22nd.

There was another aspect of his game that emerged later in the year that did not appear in either his rookie year or early in the 2008-2009 season – penalties. In his rookie campaign, Backstrom logged a total of 24 minutes in penalties, and only once did he draw more than a single minor infraction in any one game. This year, Backstrom continued on a similar pace until an odd stretch from February 15th through March 12th. In the space of 13 games, Backstrom earned 16 of the 46 minutes he would earn for the year. It didn’t seem to affect his scoring – 5-9-14 in the 13 games, and he was 2-6-8 in the seven games in which he took penalties. One might say that with experience has come a bit more of an edge to Backstrom’s game, although these things are relative.

What he has been is durable. The jokes about “Fat Nicky” at the start of the year aside, Backstrom registered his second 82-for-82, as in games played. And, for what it’s worth, he surpassed the pair of Blackhawks he shared the Calder Trophy dais with in 2008 – his 22-66-88 eclipsed Jonathan Toews (34-35-69) and Patrick Kane (25-45-70). He was plus-16 to Toews’ plus-12 and Kane’s minus-2. We’re sure, though, that Backstrom would trade places with the Chicago pair, which is now in the midst of a conference final matchup, while Backstrom contemplates his summer plans.

All in all, though, it was a “build-on” season for the second year center. He built on a solid rookie year by becoming a more productive playmaker, despite a revolving door of wingers playing along side of him. He became more of a goal-scoring threat, especially on the power play. He maintained a sense of responsibility at both ends, as reflected in a plus-16 for the year (he was plus-13 in his rookie year). While he needs improvement in the faceoff circle, he did improve on his rookie production, winning 48.7 percent of his draws versus 46.3 percent in his rookie year.

Last year we wrote of Backstrom…

"Improvement and consistency. These are precisely the things one might ask for in a student. Nicklas Backstrom came a long way this year, and while he has a long way to go, he learned his lessons well."