The Peerless Prognosticator is ON THE AIR!!! -- Game 78: Capitals at Canadiens, April 2nd

The Washington Capitals head into the last ten days of the regular season with the first game of a three-game road trip on Thursday night.  The Montreal Canadiens, currently sitting on top of the Atlantic Division and one point behind the New York Rangers for the top spot in the Eastern Conference, will host the Caps at Bell Centre.

The Capitals were 4-1-0 on the road in March, beating playoff-eligible teams along the way (Minnesota Wild and the New York Rangers) while losing to one (Winnipeg Jets).  The Caps are one of five teams in the East with 20 or more road wins this season, the first time that the Caps have posted a 20-win season on the road since recording 23 road wins in 2010-2011.

The big scorers at home for the Canadiens at home in March include a couple of the usual suspects.  Max Pacioretty had five goals at Bell Centre for the month (5-2-7), which should not be especially surprising.  His 21 goals at Bell Centre this season is tied for second in the league in home goal scoring (with Steven Stamkos, behind Alex Ovechkin with 24).  And what is it with Canadians and hamburgers these days, anyway?

Tomas Plekanec also finds himself among the top scorers for the Canadiens at Bell Centre in March, going 1-5-6.  He has been a model of consistency overall for the past two months.  In 30 games since January 31st, Plekanec has not gone more than two games without a point overall (9-13-22).  One thing for Caps fans to note is that 13 of his 22 goals overall this season have come in the third periods of games, including a game-tying goal with 9:29 in regulation of what would be a 2-1 trick shot win on Opening Night in Washington against the Caps.  Plekanec is 14-14-28, plus-5, in 36 career games against the Capitals.

In March, however, those small cracks might have opened.  Price was 5-5-2, 2.08, .935, with three shutouts, and in his last eight appearances he is 4-3-1, 2.24, .929, with two shutouts, having allowed three or more goals four times in those eight games.  It is not that he has suddenly lost the ability to stop pucks, but he has been somewhat more mortal in his performances over the last three weeks.  Price is 5-9-3, 3.04, .902, with one shutout in 17 career appearances against the Caps. 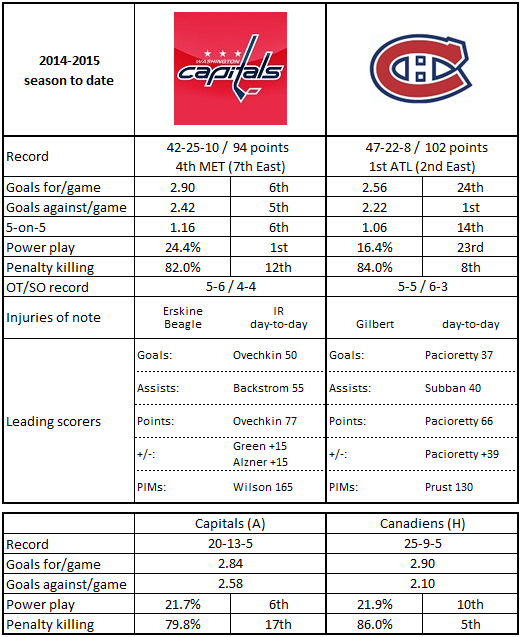 1.  Of the 16 teams currently eligible for the playoffs, Montreal has the worst scoring offense (2.56 goals per game). However, they rank eighth of those 16 teams in goal differential per game (0.34).  Thank you, Carey Price.

3.  The Canadiens do not seem to play games close.  Only four teams have played fewer one-goal games than the 32 played by Montreal (San Jose and New Jersey have 31; Toronto has 29, and Vancouver has 28).

5.  Looking at possession numbers, the Canadiens do not have quite the profile of a playoff team.  They rank 23rd in Corsi-for percentage at 5-on-5 (48.3) and 21st in close-score situations.  Their Fenwick-for numbers are hardly better – 22nd overall (48.6) and 18th in close score situations (50.4; numbers from war-on-ice.com).

1.  Only four teams have more wins this season than the Caps (24) when leading after one period (Chicago, Pittsburgh, and the Rangers have 25; Minnesota has 27), and the Caps are fourth in winning percentage in such games (.857/24-2-2).

3.  In the ten seasons since the 2004-2005 lockout, 15 players in the NHL have recorded 400 or more assists.  Of that group, only two players have not played in all ten seasons – Evgeni Malkin of the Pittsburgh Penguins (434 assists in nine seasons) and Nicklas Backstrom (422 assists in eight seasons).  Of that group of 15, Backstrom and Malkin are tied for fourth in assists per game, trailing only Sidney Crosby, Joe Thornton, and Henrik Sedin.

5.  Washington has been hit with the fifth highest total of minor penalties this season (301).  Last season the had the ninth-highest total (314).

In the storied history of the Montreal Canadiens, only five defensemen have recorded 400 or more points in their career in Montreal.  Larry Robinson (883), Guy Lapointe (572), Doug Harvey (447), and Serge Savard (412) all won Stanley Cups, all went to the Hall of Fame.  The fifth defenseman in this group is Andrei Markov, who ranks third on that list with 487 points.  Markov is one of only six defensemen to have dressed for 800 or more games for the bleu, blanc, et rouge (Robinson, Savard, Harvey, Patrice Brisebois, and Tom Johnson being the others).

P.K. Subban gets most of the attention on the Montreal blue line, both from the media and from opponents, but Markov has been a formidable force for the Canadiens for 14 seasons (and counting).  He also happens to be Montreal’s nominee for the Bill Masterton Memorial Trophy, given to the National Hockey League player who “best exemplifies the qualities of perseverance, sportsmanship, and dedication to hockey.”  Markov comes into this game with points in three straight games overall (1-2-3, even) and had three assists in six home games in March.  Markov is 1-19-20, plus-14 in 40 career games against Washington.

Alex Ovechkin has 33 goals in 40 games since the calendar turned over to 2015.  If he had not scored a goal in the 2014 portion of the season, he would still rank ninth overall in goals and would be a hat trick out of fifth.  That goal-scoring pace (a 68-goal pace over 82 games since January 1st), plus the fact that he is tied for second in points and has improved his plus-minus by 46 points over last year’s disastrous minus-35, has allowed Ovechkin to elbow his way into the conversation for the Hart Trophy.

And, further buttressing his case, he has not padded his stats against Punch and Judy teams.  In 35 games this season against teams currently playoff-eligible, Ovechkin is 26-12-38, plus-3, a 61-28-89, plus-7 rate per 82 games.  He has goals against 11 of those 15 palyoff-eligible teams; Montreal and Detroit are the only playoff-eligible teams in the East against which he does not have a goal this season.  Ovechkin is 20-16-36, plus-5, in 35 career games against the Canadiens.

At the moment, this is a game that previews the Round 1 matchup in the playoffs in the Eastern Conference.  With the Canadiens, Lightning, and Rangers fighting for seeding at the top of the Conference, and the Caps battling Pittsburgh, the Islanders, and Detroit for seeding in the next tier of contenders, the matchup situation is fluid.  Nevertheless, this is another of those benchmark games that have been sprinkled through the Caps’ schedule the last month or so.  Since the All-Star break, the Caps are 4-1-1 on the road against playoff-eligible teams overall, 2-0-1 against Eastern Conference playoff eligibles. The road has not been an intimidating place for the Capitals.

Posted by The Peerless at 6:08 AM No comments: