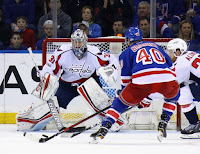 Goalies are like grits.  You can’t rush them cooking them on the stove, and the “instant” variety to finish them faster pretty much sucks.  The Caps have been “cooking” Philipp Grubauer gently and with care since he was drafted in the fourth round of the 2010 draft.  He spent a final year in the Ontario Hockey League after he was selected by the Caps; played a season in the ECHL; split a year among the ECHL, AHL, and the Caps; and finally became the full-time back-up goaltender to Braden Holtby, a role he played this season as well.

His progress has been interesting, improving his save percentage on each successively higher rung of the developmental ladder -- .903 in his last season in the OHL, .916 in 69 ECHL games, .919 in 105 AHL games, and .923 in 66 games with the Caps.  That .923 career save percentage with the Caps is the second-best among 76 active goaltenders with at least 2,500 career minutes played.

This season was particularly noteworthy in Grubauer’s development.  He finished fourth among 56 goalies playing at least 1,000 minutes in save percentage (.926) and second in goals-against average (2.04).  He was fourth in that group in save percentage at even strength (.937).  Grubauer did not allow more than three goals in consecutive appearances all season (24 games), and he had only one stretch in which he allowed three goals in as many as three consecutive games (January 16-24 against Pittsburgh, Dallas, and Ottawa, over which he had a record of 1-1-1).  He did not have consecutive games this season in which his game save percentage was under .910.

Grubauer was lights out at home this season, when he got the chance.  He appeared in seven games at Verizon Center and won all five decisions with which he was credited, the only goalie in the league who played at least 250 minutes on home ice with a perfect win-loss record.  Among that same group of 60 goalies, he had the best goals-against average (0.72) and save percentage (.973).  All three of his shutouts were on home ice. 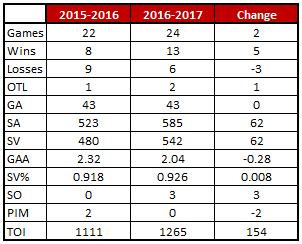 Fearless’ Take… Since the league started keeping save percentage statistics in 1982-1983, 57 Capital goalies have recorded seasons in which they logged at least 1,000 minutes of ice time.  In that group of 57 goalies, Grubauer’s .926 save percentage this season ranks first overall, as does his 2.04 goal-against average.

Odd Grubauer Fact… There were 25 goaltenders this season who recorded three or more shutouts, Grubauer among them with three.  Of that group, Grubauer logged almost 200 fewer minutes (1,264) than the goalie with the next lowest ice time in the group (Carter Hutton: 1,459 minutes and four shutouts).

When the Capitals took the ice at home against the Los Angeles Kings on February 5th, they were skating the second of a back-to-back set of games, winning in Montreal the night before, 3-2.  That was a formula for giving Philipp Grubauer a start, and he made the most of the opportunity.  It was not easy, though.  The Kings were coming off a game the previous night as well, beating the Flyers in Philadelphia in overtime, 1-0, their fourth straight road win.  Grubauer stopped all 12 shots he faced in the first period as the Caps took a 2-0 lead.  He slammed the door in the second, stopping all 15 shots he faced as the Caps scored another pair of goals.  Former King Justin Williams capped the scoring in the third period, while Grubauer nailed the door shut with 11 saves on 11 shots to earn the shutout in the 5-0 win.

Barely 21 minutes into their January 16th contest in Pittsburgh, the Caps were coasting with a 3-0 lead, and Philipp Grubauer had a good view of it, doing baseball cap duty from the bench in favor of Braden Holtby.  Then, things fell apart…quickly.  The Penguins scored to break the shutout, scored again less than a minute later to get within a goal, then scored less than two minutes after that to tie the game.  When Pittsburgh scored a pair of goals 50 seconds apart to take a 5-3 lead, Holtby’s night was over.

Enter Grubauer.  The Caps clawed back into a tie with a pair of goals less than two minutes apart late in the second period, and they seemed to have blunted the Penguin momentum, keeping the Penguins from getting a shot on goal since Evgeni Malkin scored at the 14:37 mark to give the Pens the 5-3 lead and end Holtby’s evening.  However, 25 seconds after the Caps tied the game on a shorthanded goal by Lars Eller, Malkin struck again, scoring on the same Penguin power play on the first (and only) shot Grubauer faced in the second period to take a 6-5 lead into the third period.  It went back and forth in the third period, Sidney Crosby giving the Pens a tw-goal lead early and the Caps scoring a pair of goals five minutes apart mid-way through the third period to tie the game.  The teams split 14 goals in regulation, giving one the impression that the overtime coming up would be brief.  It was.  Conor Sheary followed up his own shot with the game-winning goal 34 seconds into the extra session, the third goal allowed by Grubauer on 11 shots in his relief of Holtby.  It was his only loss in a relief role in the regular season and the most goals he allowed in any short stint.

With 18 minutes and change in a mop-up effort in a 6-2 loss to Pittsburgh in Game 2 of the second round, there isn't enough meat on the bone to talk about here.

On almost any other team in the NHL, you could reasonably say that Philipp Grubauer has completed his apprenticeship and is ready to assume the duties of a number one goaltender in the NHL.  Unfortunately for him, former Vezina Trophy winner and two-time finalist Braden Holtby is ahead of him on the depth chart.  When Nate Schmidt was selected by the Vegas Golden Knights in the expansion draft instead of Grubauer, it left Grubauer once more on the outside looking in on a starting role in the NHL (truth be told, he'd be that in Las Vegas, too, behind Marc-Andre Fleury).  And it can become a difficult situation for the player, who has Ilya Samonsov – who might be Holtby’s successor as the franchise goaltender – a year or two away from being a credible backup.  The team has managed Grubauer with patience.  The player has approached his job patiently and professionally.  But time ticks on, and being the best backup goalie in the league might not be a title any NHL goaltender aspires to, especially when he is 25 years old and entering what might be his prime years.  Grubauer’s play in 2016-2017 argues that the time for his close-up is at hand.  But the camera is pointed at someone else for the weeks, months, and perhaps years to come.