The Peerless Prognosticator is ON THE AIR!!! -- Game 48: Panthers at Capitals, February 2nd

The prelude and parties are over, the “first half” of the 2015-2016 NHL season in the books and the All-Star festivities in Nashville a memory.  Now, it’s down to business.  For the Washington Capitals, who recorded the league’s best record in the pre-All-Star portion of the season, getting back to business starts with a challenge and perhaps an unexpected one if you think back to early-season prognostications.

The Caps open the post-All-Star portion of the season hosting their closest pursuers in the Eastern Conference race, the Florida Panthers, in a nationally-televised game on Tuesday night.  We use the term “closest pursuer” advisedly, the Panthers being 11 standings points behind the Caps as the NHL resumes play.  Here is the thing, though.  When the Caps beat the Pittsburgh Penguins on December 14th and overtook the Montreal Canadiens for first place in the Eastern Conference, they held a 12-point lead on the Panthers.  Since then, the Caps are 14-2-2.  The Panthers are 15-3-1.

That the Panthers would be this good over this much of the season was not what was envisioned for that club as the season dawned.  Sure, most folks thought a Florida team would be the class of the Atlantic Division, but the consensus was that the team would be the Tampa Bay Lightning, a club that reached the Stanley Cup final last season.

The Panthers road to that 15-3-1 record since mid-December has been uneven, to say the least. “Streaky” would be a better description.  They started that seven-week run with a 12-game winning streak, longest in the league this season (since tied by the Chicago Blackhawks).  They followed that up with a four-game losing streak (0-3-1), but come to Washington on a three-game winning streak.

Those last three games should be cause for concern for Caps fans, for the wins were not of the “squeaked-by” variety.  Florida beat Chicago, the Lightning, and the Toronto Maple Leafs by margins of at least three goals in each victory, outscoring the trio by a combined 14-3 margin.

The goal scoring was led by Reilly Smith, who has three of those 14 goals scored by the Panthers in their last three games, two of them game-winners (in the 4-0 win over Chicago on January 22nd and the 5-2 win over Tampa Bay the following night).  Smith will bring a four-game goal scoring streak into this contest, tying his longest of the season.  With that streak, Smith lifted himself into the team lead in goals scored this season (16), and he is closing in on a career high (20 goals in 2013-2014 with Boston).  In eight career games against Washington, Smith is 0-1-1, minus-3.

Brian Campbell, along with Smith (3-1-4) and Olli Jokinen (1-3-4) has four points over the Panthers’ three most recent wins (2-2-4).  For Campbell is it part of a four-game points streak that he brings into this game (2-3-5, plus-4) after registering just a two points (both assists) over his previous 13 contests.  The two goals he scored – in the wins over Chicago and Tampa Bay – interrupted a 23-game drought in which he failed to record one.  The recent point spurt was a welcome occurrence in light of his performance over the past four seasons over which his points per game dropped from 0.65 per game in 2011-2012 to 0.33 last season.  Until this five-points-in-four-games run he was averaging 0.31 points per game.  Campbell is 4-18-22, minus-15, in 42 career games against the Caps.

The question in goal for the Panthers might be whether head coach Gerard Gallant calls on Roberto Luongo after his all-star turn this past weekend.  He went into the break on a roll, stopping 87 of 90 shots over three games (all wins). Among goalies with more than 1,200 minutes of ice time, Luongo ranks tied for sixth in wins (22, with New Jersey’s Cory Schneider), fifth in goals against average (2.08), fifth in save percentage (.930), and tied for third in shutouts (four).  He has yet to allow more than three goals in consecutive games this season.  He is also 12-2-1 in his last 15 appearances with a 1.65 goals against average, a .944 save percentage, and three shutouts.  If there are hotter goalies in the league, it is a short list. Luongo is 20-10-0, 2.29, .926, with two shutouts in 36 career appearances against Washington. 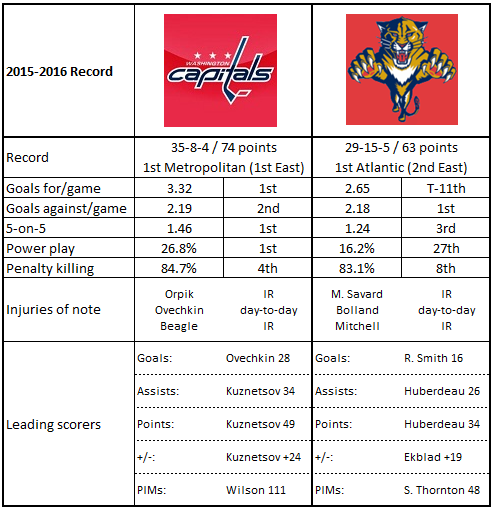 2.  If one was to ask, “who leads the Panthers in power play points?” would you answer “Jaromir Jagr?” If you did, you would be wrong.  Ditto for Aleksander Barkov, Jonathan Huberdeau, Brian Campbell, and Nick Bjugstad.  The winning answer is “Vincent Trocheck,” who has nine (4-5-9).

5. Are the Panthers looking at a correction?  Over their last nine games, Florida has a Corsi-for in close score situations of 44.7 percent at 5-on-5, and three times they were under 35 percent (numbers from war-on-ice.com).

1.  The Caps lead the league in players with a plus-10 or better. They have ten of the 61 players in this group.

3.  This will be the eighth game Alex Ovechkin will miss in his career due to suspension (this penalty for being absent from the All-Star game).  The Caps are 4-1-2 in his previous seven absences due to suspension.

4.  Washington is the only team in the NHL with an average goal differential of greater than 1.00 goals per game (1.13).  It is almost twice that of the second-place club (Dallas Stars: 0.58).

5. The Caps are going to be looking to improve one possession number in this contest.  Over their last four games going into the All-Star game break, the Caps had an aggregate close score Corsi-for of 41.8 percent at 5-on-5 (numbers from war-on-ice.com).

The last time the Caps faced the Panthers, we pondered Jaromir Jagr.  At the time we said…

A lot we know.  Jagr had a goal in that contest against the Caps (in a 4-1 Panther win), and starting with that contest he went on a 7-5-12 run over his next 14 games with 29 shots on goal to boot.  Not bad for a 43-year old.  However, since that run he went 0-1-1 in six games leading into the All-Star game break.  Did the break rejuvenate him, or is this a wall the soon-to-be 44-year old (February 15th) is hitting?  Jagr is closing in on 1,800 regular season and playoff games in his NHL career.  His 1,596 career regular season games leads all active players by a wide margin (Jarome Iginla is second with 1,444).  It might be a fool’s errand to count Jagr as slowing down, but he has been an important ingredient to the Panthers’ success this season; they are 17-6-2 in games in which he recorded a point this season.  Can he sustain that level of contribution down the stretch?  That is something that bears watching as the Panthers try to dig in to the Caps’ lead in the Eastern Conference.  Jagr is 31-60-91, plus-15 in 79 career games against the Capitals.

Alex Ovechkin is sitting out this game under suspension under league rules, Marcus Johansson was banged up in the Caps’ last game against Philadelphia before heading into the All-Star game break.  This is where a player like T.J. Oshie has an opportunity to step up.  And it would be just in time.  Oshie has been in a bit of a shooting slump lately.  He comes into this game without a goal in his last five contests, one goal in his last nine games, and two in his last 15.  Over those 15 games he is 2-for-23.  It is not a god-awful shooting percentage (8.7 percent), but that 1.53 shots per game average over that span is a bit unsettling for the top-line right winger.  He had one or no shots in nine of those contests.  In Florida he has found a stubborn foe.  In ten career games against the Panthers, he has yet to record a goal (0-1-1, plus-3).

Florida has missed the postseason in 14 of the last 15 seasons coming into the 2015-2016 campaign.  These Panthers are not those Panthers, though.  With their next win they will hit the 30-win mark, one that has been reached by only four other teams to date, including the Caps.  They are the kind of club that will bore you to death, thoroughly capable of winning close, low-scoring games (the Panthers rank fifth-lowest in total goals scored by both teams per game: 4.83).

The Caps have just two goals scored in regulation time this season against the Panthers (they scored another in overtime in a 2-1 win on Hallowe’en).  Three of the last five games between these clubs went to extra time, two of them to the Gimmick.  In four of those five games the losing team was held to a single goal.  This does not promise to be a game of fireworks, especially with the Caps’ leading goal scorer sitting it out.  That is going to put a premium on fundamentals, defense, and goaltending.  Three things that the Caps have been pretty good at for most of this season.