The Peerless Prognosticator is ON THE AIR!!! -- Game 27: Blue Jackets at Capitals, December 2nd

The Washington Capitals kicked off their five-game home stand by kicking away a chance to climb closer to the leaders in the Metropolitan Division with a 5-2 loss to the Los Angeles Kings.  They look to get back on track on Saturday night with a “Metro Matchup” against the Columbus Blue Jackets at Capital One Arena.

The Caps had better button things up pretty quick, because the Blue Jackets are coming in on a roll.  After suffering a four-game losing streak in early November (0-3-1), Columbus is 7-1-0 in their last eight games (through Thursday’s games, the Blue Jackets facing Anaheim on Friday night) to take over the top spot in the Metropolitan Division.  They’ve done it by grinding games to a halt, at least on the scoreboard.  The Blue Jackets scored only 17 goals over those eight games, but they have held opponents to just 11.

To the extent the Blue Jackets have lit the lamp on offense, and it has not been often, they have spread things around in their 7-1-0 run.  Nine players share the 17 goals scored, three apiece from the trio of Zach Werenski, Artemi Panarin, and Josh Anderson.  Anderson, who leads the team in points over this stretch (3-2-5), might be the least well known of the trio, given the team for which he plays and being an unheralded middle-round draft pick (fourth round in 2012).  After a pair of seasons with the London Knights after he was drafted and a couple of years in the AHL, sprinkled with a few games with the Jackets, Anderson became a full-time member of the roster last season, posting 17 goals in 78 games.  His goal scoring over the past two seasons has made a difference.  Columbus went 12-2-1 last season in games in which Anderson scored a goal, and they are 7-1-0 in the eight games this season in which he scored a goal (nine goals overall).  Anderson does not have a point in seven career games against the Caps and is a minus-3.

Ryan Murray seems to be stuck in a rut trying to find his way in the NHL after a promising start to his career.  Following three seasons with the Everett Silvertips in Canadian junior hockey in which he was 20-84-104, plus-51, in 168 games, he was taken second overall by Columbus in the 2012 entry draft.  After another season in juniors he made the leap to the NHL, going 4-17-21, plus-4, in his rookie season.  His sophomore season was a disaster, interrupted by knee, ankle, and a lower body injury that robbed him of all but 12 games of the 2014-2015 season. He bounced back with a fine 2015-2016 season in which he appeared in every game and went 4-21-25.  Last season, however, the injury bug hit him late, a broken hand causing him to miss the end of the regular season and all five playoff games.  Even  with 60 games on his ledger, his 2-9-11 output looked disappointing.  He has not been much more productive so far this season, going 1-4-5 in 24 games, although the plus-7 does look good on his record.  He did not dress for the Blue Jackets’ game against Carolina on Tuesday, out with an upper-body injury, his status being day-to-day.  In 11 career games against the Caps, Murray is 1-2-3, minus-2. 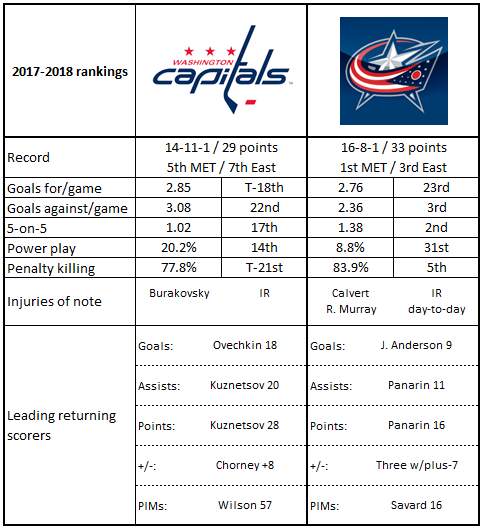 5.  Columbus is a remarkably inefficient team offensively.  They rank 23rd in scoring offense through Thursday’s games (2.76 goals per game) despite ranking third in shots per game (35.0), leaving them with a 7.9 percent shooting percentage.

1.  Evgeny Kuznetsov extended his team lead in scoring on home ice with his two goals on Thursday.  He has 14 points at Capital One Arena this season, four goals and ten assists (Alex Ovechkin: 8-2-10).  He is also tied for the team lead in power play goals (two, with Ovechkin) and leads in power play points (four).

2.  It would surprise no one that Alex Ovechkin leads the club in total goals on home ice this season (eight), but who would have had Lars Eller and Jakub Vrana tied for second almost a third into the home schedule (three apiece)?

3.  None of those eight goals by Ovechkin on home ice are game-winners.  T.J. Oshie leads the team with two; Eller, Kuznetsov, Dmitry Orlov, John Carlson, and Devante Smith-Pelly have the others.

4.  The Caps have the fourth-worst home power play on home ice through Thursday’s games (14.6 percent), and that penalty kill could use some work, too (76/.1 percent/21st).

5.  Jay Beagle is not the best faceoff artist on home ice, but he can see the top from where he stands.  Among 97 skaters taking at least 200 draws through Thursday, Beagle ranks third (65.1 percent).  He is at 75.0 percent on home ice in shorthanded situations (30-for-40).

Some players take a steady, predictable path from amateur hockey to the NHL, and then there are the paths such as that taken by Markus Nutivaara.  After climbing the amateur ladder in his native Finland, he was taken in the seventh round of the 2015 entry draft by Columbus, 189th overall and the 66th of 73 defensemen taken in that draft.  Of some note, he was taken behind three defensemen selected by the Caps – Jonas Siegenthaler (second round/57th overall), Connor Hobbs (fifth/143rd), and Colby Williams (sixth/173rd) – none of whom have yet appeared in an NHL game.  He remained in Finland for the 2015-2016 season and then skipped minor professional hockey altogether, landing a spot with the Blue Jackets last season.  He acquitted himself well, going 2-5-7, plus-7, while averaging 13 minutes and change in 66 games, adding a goal and an assist in two postseason games.  Through 20 games this season, Nutivaara has already set a career high in assists (eight) and points (nine).  Five of those eight assists have come in road games, all of them in Blue Jacket wins (3-0-0).  Nutivaara is without a point in four career games against the Caps and is a minus-3.

Since returning to the lineup after suffering a hand injury earlier this season, Matt Niskanen has three assists, but has not yet found the back of the net himself in eight games.  He had not rustled the twine in the five games leading up to his injury, either.  He has worked himself back into a heavier ice-time workload, topping 20 minutes in each of his last six games and logging more than 24 minutes in two of his last three contests.  After he put five shots on goal in the 5-2 loss to Los Angeles on Thursday, tying his high for the year, one gets the feeling he’s getting close to breaking through.  Niskanen has not been an especially prolific goal scorer with the Caps in three-plus years (four, five, and five goals before this season), but getting some contributions can only help with what has been an inconsistent offense.  What he has been since coming back from injury is a rather solid possession performer, an individual 55.73 percent shot-attempts for at 5-on-5 in eight games.  Niskanen is 1-13-14, plus-14, in 33 career games against Columbus.

This is likely to be one of those games in which one team will seek to impose its will on the other.  For the Blue Jackets, that means a low-scoring, leave-it-up-to-Bob sort of game.  Columbus has the best one-goal game record in the league (9-0-1) and one of only two teams not to lose a one-goal game in regulation this season (Winnipeg is 5-0-4).  The Caps will look to spring some guys in a cry stretch for productive nights.  Nicklas Backstrom does not yet have a goal on home ice this season, nor does Tom Wilson; T.J. Oshie does not have one in his last four home contests.  If you read this space, you can probably guess who wins the contest of wills.