Washington Capitals: By the Tens, a Look at Improvement in Ten-Game Segments

We are about to embark on our annual look at the Washington Capitals’ season “by the tens,” but before we delve into the individual player reviews, the unpleasant way in which this season unfolded got us to thinking about just how that unpleasant result came about.  One way to look back at that matter is in looking at “the tens” in a bit of a different way.

This is the second year of a new coaching regime.  Adam Oates and his assistants did not get the benefit of a full year in 2012-13 to install all the bells and whistles of their hockey philosophy and have it become second nature to the players on the ice.  Last year, we thought this year would be the season to see those concepts bloom, having had the benefit of what amounted to a 55-game test drive last season (48 regular season games and a playoff round).

So… were they?  Better, that is.  Let’s take a look at the first proposition, that the Caps getting a second start under Oates would be better this season than last.  We can do that first by looking at ten-game start segments.  Let’s start with wins and losses (note: teams making the playoffs are shaded): 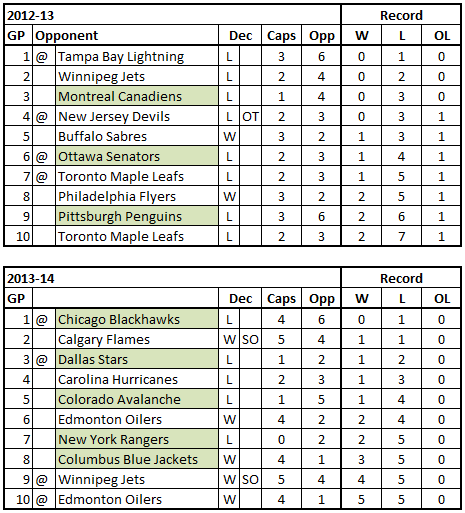 What about overall scoring?  Did the Caps improve in their goals for/against and shots for/against in their first ten games from year to year?  Yes, they did, rather dramatically in fact.  The Caps scored five more goals in their first ten games of the 2013-14 season than they did to open the 2012-13 season (not counting shootout-winning goals against Calgary and Winnipeg) – and half-goal per game improvement – and they allowed six fewer goals, year-to-year (note: games in which opponents out-shot the Caps are shaded): 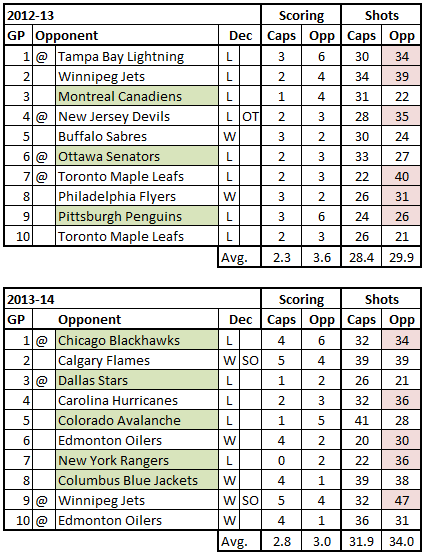 Then there is special teams.  If there was clear improvement from the ten-game start in 2012-13 to that in 2013-14, it is here.  The Caps were almost 50 percent more efficient on the power play, year-to-year (from 20.0  percent to 29.7 percent).  The penalty kill was improved in two ways.  There was the improvement in efficiency, from 77.8 percent to 88.2 percent.  But there was also the improvement in limiting shorthanded situations faced.  The Caps faced 11 fewer such situations in their first ten games in 2013-14 than they did in their first ten games in 2012-13, a 24 percent improvement: 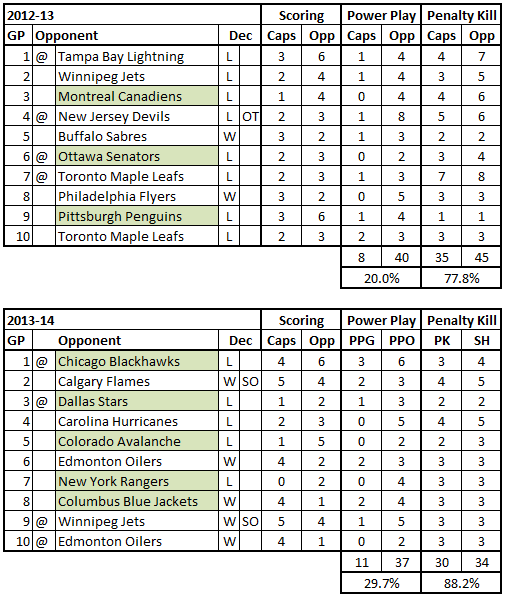 Those are the gross measures of comparison.  What about the underlying numbers?  Let’s look at those numbers in even strength situations.  Here the numbers are more disturbing.  Corsi events – all shots directed at the opponent’s net – increased substantially in total both for the Caps and their opponents from the first ten games of 2012-13 to the first ten games of 2013-14.  However, one might also consider the events per minute of time.  This is where things get disturbing.  For the Caps, the number of Corsi events per minute of even strength time increased by only 1.8 percent (from 0.89 to 0.91).  For opponents, though, the increase was more significant, from 0.87 events per minute of even strength time to 0.94, an 8.5 percent increase (numbers from extraskater.com).

These numbers were reflected in the shot values, as well.  Tracking with the Corsi and Fenwick results, total shots at even strength increased for both the Caps and their opponents over the first ten games of 2013-14 compared to 2012-13.  But on a shots-per-minute basis at even strength, opponents saw their shots increase by 19.1 percent, compared to a 1.1 percent increase for the Caps.  On a year-to-year basis looking at the first ten games, the picture was not pleasant.

The year to year differences are one thing in looking at improvement over time, but there is also the matter of whether the Caps improved as this past season wore on.  That might be done looking at their first ten games and their last ten contests.

Again we can ask, “were they?”  Better, that is.  In terms of wins and losses, yes and no.  The Caps had that 5-5-0 record in their first ten games to start the 2013-14 season, earning ten standings points.  In their last ten games there were 4-3-3, good for 11 standings points.  But there also was the matter of those three extra-time losses, all coming in the Gimmick.  That left the Caps with six losses in those last ten games and those three points left on the table in the freestyle competition hurting their cause to reach the post-season: Let’s go through the same drill here as for the year-to-year comparison.  First, overall scoring.  The Caps played a somewhat tighter game late than they did early.  Their goals per game were down slightly, but their goals allowed dropped even further.  It was not a case of tightening up on shots allowed, though.  The Caps allowed 34 shots on goal per game in their first ten games of the 2013-14 season, 33.9 in their last ten games.  That difference is mitigated somewhat by the Caps playing an extra ten minutes in their last ten games (four shootout results versus two in their first ten games), but not enough to suggest significant improvement in holding opponents’ shot totals down. 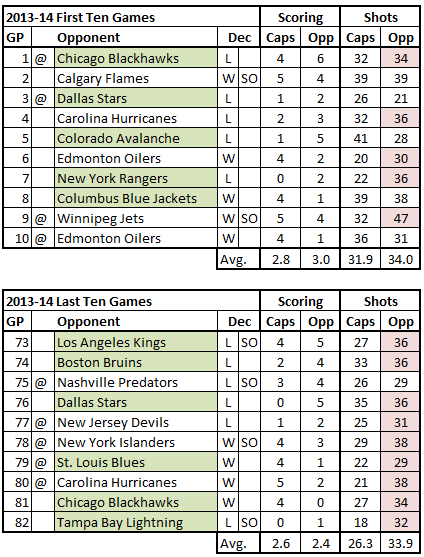 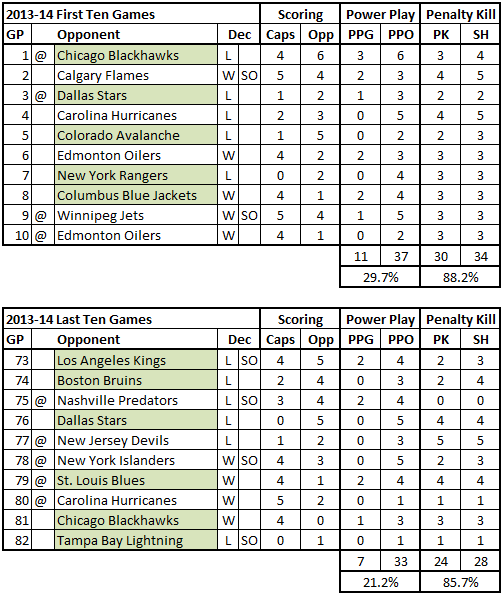 The underlying numbers paint an unkind portrait, though.  Corsi events at even strength dropped through the floor, in total (from 456 to 392) and in events per minute (0.91 to 0.75) of even strength ice time.  Meanwhile, Corsi events for opponents went in the other direction, from 473 in their first ten games of the season (0.94/minute) to 533 (1.02 per minute).  That the Caps’ Corsi events per minute dropped by 17.4 percent while their opponents had theirs increase by 8.3 percent made for a difficult conclusion to the season.

The Fenwick event numbers and shot totals painted a similar picture.  The Caps saw their total and event-per-minute results drop from their first ten games to their last ten.  Much of that might be attributed to the quality of competition in the last ten games; five of their last ten games were played against teams that finished in the top six in Corsi-for percentage at even strength.

But even this is something of a mirage.  If you break that last ten-game segment into equal parts, the first five games were played to a 4.7 percent shooting percentage and a .897 save percentage at even strength.  The Caps, needing to win these games to hang onto any semblance of competition for a playoff spot, went 0-3-2 in those games.  In the last five games they had a 13.4 percent shooting percentage at even strength and a .936 save percentage.  It was too little, far too late.

In the end, the Caps have played 130 regular season games under this coaching regime.  Will it be the groundwork for a better team down the road?  Perhaps it will, perhaps not.  But at the moment it is hard to see where this team has improved over the past two seasons, either in their overall performance numbers (goals scored and allowed, special teams) or their underlying productivity numbers (Corsi, Fenwick, shots for and against).  Certainly not in their wins and losses.  The only positive blip in all of this looks like the ten games we did not subject to this review – the last ten games of the 2012-2013 season that the Caps played to an 8-1-1 record (part of an 11-1-1 finish) to sneak into the playoffs.  It was a brief, pleasant interlude in what looks like a very mediocre performance over the last two seasons.

additional information obtained from hockey-reference.com
Posted by The Peerless at 11:32 PM No comments: