The Peerless Prognosticator is ON THE AIR!!! -- Game 30: Capitals at Kings, December 4th

The Washington Capitals get no rest in the next leg of their west coast trip, following up Tuesday night’s game against the San Jose Sharks with a visit to Los Angeles on Wednesday night to visit the Kings.  The Caps are coming off a 5-2 in San Jose, while the Kings are stumbling with a 3-4-1 record in their last eight contests. 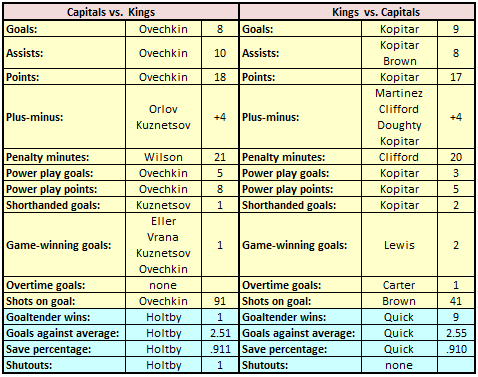 Facts to Impress Your Friends…

With the quick turnaround, we’re giving you some fun facts to chew on:

-- Los Angeles’ power play might not have enough wattage to light an appliance bulb on home ice.  At 10.7 percent, the home power play ranks 29th.

-- The odd thing about the Kings power play is how often they get to practice it.  No team in the league has had more power play opportunities overall (56).

-- No team in the Western Conference has fewer takeaways than the Kings (148).

-- Los Angeles is one of five teams remaining with a perfect record when leading after two periods (7-0-0).

-- The Caps and the Winnipeg Jets are the only teams in the league with at least ten wins by three or more goals.  The Caps earned their 11th to tie Winnipeg with the 5-2 win over San Jose on Tuesday.

-- Only Arizona (once) and Boston (none) have fewer losses by three or more goals than the Caps (three).

-- The blacksmith apron for the Caps’ fine work on iron goes to Dmitry Orlov.  Going into last night’s game, he led the team in hitting the goal frame with five pings, two off the crossbar and three off posts.

-- This will wrap up the Caps’ fifth back-to-back set of games this season.  The split their first three BtB’s, going 3-1-2 overall, before sweeping their most recent one with wins over Tampa Bay and Detroit.

The Caps average about a whole goal per game more in scoring offense than the Kings and are about half a goal per game better in scoring defense.  The Caps have five players with double digit goal totals, the Kings with only one (Anze Kopitar).  Braden Holtby and Ilya Samsonov have been consistent more than spectacular; Jonathan Quick has lost three of his last four decisions (0-2-1) and allowed four goals in two of his last three games.  But the Kings have their home cooking going for them, 9-5-1 on home ice.  What it means is that if the Caps tend to business and keep from letting the Kings establish themselves early, it should be a successful night.  Should be.

Posted by The Peerless at 1:28 AM No comments:

The Washington Capitals kicked off their west coast tour on Tuesday night when they visited the San Jose Sharks.  The Sharks scored first and last, but the Caps had five goals in between to skate off with a 5-2 win.

San Jose wasted no time taking the early lead when Melker Karlsson snuck behind Michal Kempny in the neutral zone, took a pass from Brenden Dillon off the side boards, skated in on Braden Holtby, and snapped a shot into the far side of the net to give the Sharks a 1-0 lead 2:33 into the game.

Washington tied the game in the seventh minute when Nic Dowd dug out a loose puck from the left wing boards and sent it to John Carlson at the left point.  Carlson’s drive from that spot was redirected down and past goalie Martin Jones by Garnet Hathaway circling out in front of the net, and the Caps tied the game at the 13:31 mark.

The Caps struck again quickly thereafter.  Keeping the Sharks pinned in their own end, largely due to the ability of T.J. Oshie to dig out loose pucks and keep them alive, Oshie nudged the puck to Carlson at the right point.  He sent the puck to the net for a redirect try by Jakub Vrana posted at the top of the crease.  His first chance was stopped by Jones, but the puck was left in the paint, and Vrana chipped it in to make it 2-1, 14:24 into the period, just 53 seconds after the Hathaway score.

Washington took a 3-1 lead barely two minutes later.  Michal Kempny fed the puck from the left wing boards to John Carlson stepping up at the top of the right wing circle.  With time and space, Carlson stepped into one, rifling a shot over the glove of Jones to make it 3-1, 16:32 into the period.  That would be how the teams went to the locker room for the first intermission.

It was the Caps’ turn to post an early period goal to start the second period.  Keeping the Sharks from breaking cleanly out of their own zone, Nic Dowd collected the puck and fed it low to the middle where Garnet Hathaway was closing.  Hathaway’s first shot was stopped by Martin Jones, but not cleanly.  As he was tumbling to the ice to the left of Jones, Hathaway managed to poke the puck the last foot and across the goal line to give the Caps a 4-1 lead just 2:31 into the period.

The Caps added to their lead late in the period when Lars Eller walked the puck behind the San Jose net, spun away from a defender, and sent the puck to Vrana between the hash marks for a one timer on which Jones had no chance.  The Caps had a 5-1 lead at the 16:15 mark.  That tally closed the middle period scoring.

-- Nic Dowd was 5-for-6 on faceoffs through two periods.

-- Nick Jensen, Radko Gudas, and T.J. Oshie had no shot attempts through 40 minutes.

San Jose got one back late in the third period on an Evander Kane goal in the 14th minute.  And then Kane got all “suspend me” with an elbow to the head of Radko Gudas that earned him a major and a misconduct, and would seem likely to get him a conversation with the league about his antics.  The Caps failed to score on the extended power play, but they ran out the clock to take the 5-2 win.

-- Jakub Vrana’s two goals give him seven career multi-goal games, three of them this season.  Only Alex Ovechkin has more (five).

-- John Carlson had a goal and two assists for three points.  That ties Scott Stevens for fifth place in games with three or more points (18) team history among defensemen.

-- Carlson’s three-point game was his sixth this season, tying him with David Pastrnak for fourth most in the league among all skaters.  No other defenseman has more than three (Quinn Hughes).

-- Garnet Hathaway had two goals, his second career two-goal game.  He had two with Calgary last season in a 4-1 win over the Rangers on October 21st.

-- Nic Dowd had a pair of assists to become the 13th Capital to record at least one multi-assist game this season.

-- This was the fourth time this season the Caps allowed an opponent 25 or fewer shots on the road.  They are 4-0-0 in those games.

-- It was not a big hitting game for the Caps, or at least it was not scored that way, but they spread it around.  Alex Ovechkin, Garnet Hathaway, and Radko Gudas all were credited with three hits, accounting for half the Caps’ total.

Good game.  Excellent game.  One of the best games the Caps have played this season, especially given the House of Horrors this arena had been in the past.  The wheel just keep on turning.

Posted by The Peerless at 1:24 AM No comments: