The Peerless Prognosticator is ON THE AIR!!! -- Game 41: Capitals at Rangers, January 9th

The Washington Capitals conclude their five-game road trip on Saturday afternoon with a match-up against the New York Rangers at Madison Square Garden.  The Caps will be returning to the arena in which they authored one of their most interesting comebacks this season, spotting the Rangers a 3-1 lead before roaring back with six unanswered goals in a 7-3 win on December 20th.

Since that comeback win, the Caps have rolled along, posting a record of 6-1-1 and extending their Metropolitan Division lead to 14 points over the New York Islanders and 15 points over the Rangers.  Since losing to the Caps, the Rangers have alternated wins and losses, going 3-2-0.  Except for a 3-2 overtime win over the Anaheim Ducks in that stretch, there has been little doubt in the decisions, the other four games settled by multi-goal margins.

The Rangers outscored opponents by a 17-12 margin over their last five games.  The Blueshirts have done well at full and even strength over those games, outscoring opponents, 13-9.  They also have a shorthanded goal and a pair of empty netters on their ledger.  The rest of special teams have been a problem, though.  New York is 1-for-17 on the power play in those games (5.9 percent), while they are 13-for-18 killing penalties (72.2 percent).

The Rangers are led in scoring over their last five games by Rick Nash (2-3-5).  It has not been the best of seasons for the 13-year veteran.  His 12 goals in 38 games to date is his worst goals-per-game output (0.32) since he scored 17 goals in 74 games in his rookie season in 2002-2003.  Those two goals over his last five games leaves him with four in his last 17 contests, and his goal against the Nashville Predators in a 5-3 loss on December 28th broke a 13-game streak without an even strength goal.  Ice time has become a bit of an issue for Nash, who is fourth among the team’s forwards in average ice time (13:26 per game), even though he leads the team in overall shifts taken per game (25.6).  Nash is 12-9-21, plus-2, in 20 career games against the Capitals.

Derick Brassard leads the Rangers in goals scored in their 3-2-0 run with three.  Two of them came when he figured in all of the scoring (2-1-3) in a 3-2 overtime win over Anaheim on December 22nd.  It was Brassard’s second three-point game of the season and his third two-goal game of the season.  The odd part about his having two three-point games is that his other one – on October 20th in a 3-1 win over Toronto – also had him figuring in all the Ranger scoring with three assists, and it is the only game this season in which he recorded more than one assist.  Brassard leads the team in power play scoring (3-7-10) and is tied for the club lead in game-winning goals (3).  He is 3-7-10, plus-5, in 16 career games against Washington. 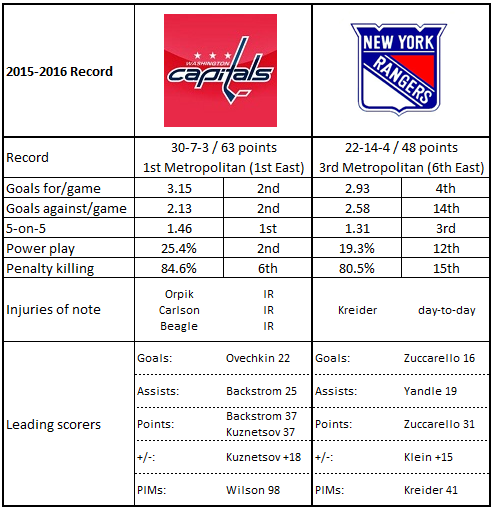 2.  The Rangers have been quite a front-running bunch this season, not unlike the Capitals.  They have the third-best record in the league when scoring the game’s first goal (17-1-2/.850), are tied for the fourth highest win total when taking a lead into the first intermission (14), and they are one of three teams with a perfect record when leading after 40 minutes (15-0-0).  On the other hand, they have won just five times in 20 games in which the opponent scored first, and they have yet to win a game when trailing after two period (0-11-1), one of only three teams seeking their first such win.

3.  The Rangers have allowed at least one goal in the first period in each of their last eight games.

4.  An ominous statistic for the Rangers is their record in games by goal margin.  They do well enough in blowouts – no team has more wins in games decided by three or more goals (12, tied with the Dallas Stars), but they rank just 19th in winning percentage in one-goal games (7-4-4/.467).

2.  Thirty wins is a lot, but the Caps are a hard loss as well.  Of their most recent seven losses this season, five of them were by one goal, three of those in extra time.

3.  PDO (team shooting plus save percentages) is a frowned upon statistic because it is subject to corrections over large numbers of events.  Nevertheless, there is an interesting PDO aspect about the Caps.  Their PDO overall at 5-on-5 in close score situations (102.9) ranks fifth in the league.  However, it is not a product of either shooting or save percentage lending undue weight to that ranking.  The Caps rank fifth in shooting percentage (8.4) and fifth in save percentage (94.4).

5.  Odd thing about that 7-3 win over the Rangers back on December 20th, and perhaps something the Caps will want to avoid.  They were a minus-13 in shot attempts in close score situations in that game, out-attempted by an almost 2-to-1 margin (29-16/Corsi-for of 37.7 percent).  It was their fifth-worst plus-minus and third-worst Corsi-for in those situations in 40 games this season (numbers from war-on-ice.com).

Jayson Megna is one of those feel-good stories about a kid who comes a long way to get his chance in the NHL.  Back in 2012 he had just finished his first year as a member of the University of Nebraska-Omaha Mavericks hockey team, and he was invited to attend the Pittsburgh Penguins’ development camp.  He impressed the club enough to get a two-way contract and was assigned to the AHL farm team at Wilkes-Barre/Scranton.  In 2013-2014 he dressed for 36 games with the big club, going 5-4-9, plus-1, two of his goals being game-winners.  He could not stick with the Pens, though, playing only 12 games with the big club last season (0-1-1, minus-2).  Last July he signed a one-year/two-way contract with the Rangers and started the season with the Hartford Wolf Pack.  After 34 games in which he led the league in shots on goal, he was called up to the Rangers, and in his Ranger debut last Tuesday against the Dallas Stars he had a goal and an assist in just under 12 minutes of ice time.  This will be his second career game against the Caps; he did not record a point in his previous contest.

Karl Alzner’s player profile might read as follows: “reliable, durable defensive defenseman who wins battles by playing angles and using position rather than by relying on physical presence.”  What it won’t say, but these days could, is that he makes contributions in the offensive end.  The fact is, Alzner is quietly assembling a decent year in the offensive end of the ice.  He is 2-10-12 in 40 games, and while this will hardly challenge Erik Karlsson or John Klingberg for scoring supremacy among NHL defensemen these days, it is a pace that would have him set a personal record for points in a season (25).  It is worth noting that in each of the last four full seasons, Alzner has improved his personal best in points each season: 12 in 2010-2011, 17 in 2011-2012, 18 in 2013-2014 (the 2012-2013 season being only 48 games), and 21 last season.  Alzner comes into this game with points in three of his last four games and is 0-4-4, minus-12, in 24 career games against the Rangers.

The Caps are half-way through the regular season race after this game, and they approach the mark with a few dings and dents on the red car leading the NHL race.  John Carlson and Brooks Orpik are out on defense.  Jay Beagle is missing among the forwards.  Zach Sill is sitting another game for his hit on Adam McQuaid in the Caps’ 3-2 win over Boston on Tuesday.  Marcus Johansson, who might now be considered for a stunt double role in the next remake of “Slap Shot,” is out for two games after being suspended by the Department of Player Safety for his hit on Thomas Hickey in the Caps’ 4-1 win over the New York Islanders on Thursday.

This is, as they say, an opportunity for others to step up and make a contribution.  It might be Paul Carey, formerly of the Colorado Avalanche who was called up to the Caps from Hershey on Friday, who has his moment.  While all eyes might be on Alex Ovechkin in his chase for his 500th career goal, this might turn out to be the Jayson Megna-Paul Carey show.

Posted by The Peerless at 10:26 PM No comments: