For the Washington Capitals, the End of an Era

The “Rock the Red” era is dead.

That isn’t a question, and it isn’t even really an opinion.  It is dead, succumbing to a peculiar strain of avian flu borne by Penguins.  What started as a season of hope, what became a season of accomplishment, what was almost an expectation that this – finally – would be the season in which everything came together for the Washington Capitals, died quietly at the hands of the team that has inflicted more emotional punishment on this franchise than perhaps any other has done to another franchise in the history of pro sports in North America, save for that whole “Bambino Curse” thing.

The quiet whispers among the cheers this season were that if the Capitals were ever to win a Stanley Cup, this was the year they could do it, in fact had to do it.  With another year tacked on to the resume of Alex Ovechkin and Nicklas Backstrom; the impending unrestricted free agent status of T.J. Oshie, Justin Williams, Karl Alzner, and trading deadline acquisition Kevin Shattenkirk; and the corresponding need to renew (at higher rates of compensation) young restricted free agents Evgeny Kuznetsov, Andre Burakovsky, and Dmitry Orlov, which would restrict the team’s ability to add players such as Oshie and Williams as they did two years ago, the window for the Capitals as a serious Stanley Cup contender was narrowing.

But as if to hold the window open just a little wider for a little longer, the gods of hockey gave the Caps a break.  Three of them, in fact.  The Penguins faced the Capitals missing their top defenseman (Kris Letang) and their number one goaltender (Matt Murray) for the entire series, and then they lost their best skater – the best player on the planet in Sidney Crosby – to a concussion early in Game 3 that kept him out for the better part of two full games.  Not that the Pens were reduced to an AHL lineup; they still had Evgeni Malkin (the second best center on the planet, if not its second best skater), Phil Kessel, Marc-Andre Fleury, and a number of veterans from last year’s Stanley Cup run.  Nevertheless, it was a depleted team that the team with the best regular season record was facing.  The window looked inviting instead of like a guillotine slamming down.

And now, it is closed.  Not locked, perhaps, for the Capitals will remain a good team in the years to come.  But absent general manager Brian MacLellan pulling a rabbit out of his hat in the off-season, “good” might be a ceiling for the Capitals for the remainder of the tenure of Ovechkin and Backstrom in Washington.  The Caps might be a team that can make the postseason, but it is likely to be one that will be discussed among the group of teams with long odds on long runs in the playoffs, not as one of a few with serious Cup aspirations.

The loss to the Penguins in the second round is especially bitter and not merely for the fact that it comes against a team that now has nine wins in ten postseason series against Washington.  One of those Penguin series wins came in 2009 in a gut-wrenching seventh game.  But even with that difficult outcome, Capitals fans could take some measure of confidence that the team that lost would not be denied more, and more satisfying bites at the playoff apple.  Ovechkin was just 23 years old, Backstrom was just 21.  You could imagine the 2009 setback as just that, a temporary disappointment that could be used as a learning experience that would serve the Caps well over the years to come.

What the Caps and their fans learned since were new ways to deal with the disappointment of early round playoff losses.  Since that 2009 loss to the Penguins, the Caps have gone through four coaches (Bruce Boudreau, Dale Hunter, Adam Oates, and currently Barry Trotz).  MacLellan succeeded George McPhee in the general manager’s chair.  The Caps, including Ovechkin and Backstrom, have had 61 skaters and five goaltenders dress for at least one postseason game since that 2009 loss to the Penguins.

Meanwhile, the very team that was to be the principal rival of the Capitals for a generation – these same Penguins – left the Caps behind in that 2009 season, winning the first of two Stanley Cups in this era and now on their way to challenging for a third.  The Chicago Blackhawks of Jonathan Toews and Patrick Kane caught and passed the Caps to win three Cups of their own.  The Los Angeles Kings of Anze Kopitar and Jonathan Quick did the same to win two Cups.  And now, in just another cruel twist of fate, the Toronto Maple Leafs (defeated by the Caps in the first round this postseason) and the Edmonton Oilers appear poised to catch and pass the Caps on their respective journeys to competing for a championship.

This year feels so different from other all-too-early postseason exits.   One might even feel wistful thinking about it.  Depending on who returns next season, Alex Ovechkin, depending on other postseason moves, could be the oldest skater on the club (he will be 32 next September, a month older than Jay Beagle).  Backstrom will be 30 in November.   It is hard to think of their production improving going forward, and you can almost see the weight of postseason misfortune pressing heavily upon them.

The rest of the roster – the new core, if you will – cannot be spared, either.  Andre Burakovsky and Evgeny Kuznetsov improved upon their dreadful production in the 2016 postseason, but there remained a lack of consistency and their rising to the moment (they combined for three shots on goal and no points in Game 7 against the Penguins).  Can this “next wave” of youngsters grow into more productive roles in the spring?  Saying “they can” is not equivalent to saying “they will.”  To this add the mystifying performance of goaltender Braden Holtby this postseason.  “Collapse” might be too strong a word, but the postseason drop-off of the best postseason goaltender in the post-expansion era was a disappointment.  His surprisingly un-“Holtbeast”-ly performance should not have come as an utter shock to any fan of this team of long standing.  It was a thoroughly “Caps” thing to happen.

Almost as “Caps”-like was having the jewel of the trading deadline – defenseman Kevin Shattenkirk – become, if not quite a liability on the ice as the series with the Penguins started, an asset of a fleeting nature as it ended, almost certain to depart in the coming off-season.

Some contend that history doesn’t matter.  History is the 500-pound gorilla in the room that is on crack.  It will not be subdued.  Here is a chilling fact.  When the Caps entered the NHL in 1974-1975, they were one of 18 teams in the league.  Of those 18 teams only one team has reached conference final (or in the old days, the “NHL semi-finals”) fewer times than the Caps, who have done it twice.  And that team – the California Golden Seals – dissolved (as the Cleveland Barons) after the 1977-1978 season.

We do not advocate that Caps fans end or change their allegiance.  We’ve been a fan of this franchise since moving here in 1984 and have no plans to jump on any bandwagon painted in different colors.  But making the emotional investment in this team and this franchise with each passing year never gets easier.  I am old enough to remember the disappointments of the teams of the 1980’s, which means that I am old enough now to wonder how likely it is that I -- and fans of similar vintage -- will ever see a Stanley Cup champion in Washington.

For the players, it has to be different. This has been something they dreamed of since they first laced on a pair of skates.  To be in the moment and see it pass, year after year, has to be a pain no fan can comprehend.  I read of Nicklas Backstrom and his father after last night’s game, and (being as old or older than most of the fathers of these young men) I wanted to take them all out for an ice cream… 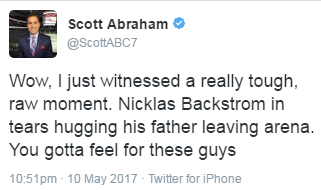 “Rock the Red” has become less a marketing theme or the description of what might have been the best era in Caps hockey (and perhaps among the best in the last couple of decades in the NHL) and more a contemptuous turn of phrase.  “Rock the Red” sounds too much like “Mock the Dead,” something no small number of commentators will be engaging in over the next days, weeks, or perhaps months when they discuss the Caps at all.

The hardest part would seem to be before all of us in Capitals Nation.  Caps fans should have no delusions about this club.  It is at an inflection point – the point at which it will almost certainly cease to be on short lists for Stanley Cup contenders and become merely one of a couple of dozen teams that can credibly challenge for a playoff spot.

None of this sentences the Caps to spend the rest of the careers of Ovechkin and Backstrom without a Stanley Cup, but it seems likely that they would be considerable underdogs in that quest.  It is something Caps fans might have to become resigned to and to accept any postseason success, modest though it might be, as a pleasant surprise rather than an expectation.  That makes the first order of business realizing that this era of Capitals hockey -- the “Rock the Red” era – is dead.