The Peerless Prognosticator is ON THE AIR!!! -- Game 35: Capitals vs. Hurricanes, December 20th

The Washington Capitals return to their brief sojourn through the Metropolitan Division on Friday evening with a visit to Raleigh, North Carolina.  It is the third of four straight divisional games for the Caps and a chance to improve on their 7-5-0 record against their new/old rivals.

The Caps are part of a great big “meh” I the middle of the new Metro Division, at least insofar as insofar as intra-divisional rivalries are concerned.  Pittsburgh is way out in front in wins and losses within the division with a 12-4-0 record.  At the other end the New York Islanders are a dismal 2-8-3 (through Wednesday’s games).

The Caps, with their 7-5-0 divisional record, are in that great glop of goo in the middle, standing in third place among the clubs in intra-divisional records.  It is not much better than the seventh-place Columbus Blue Jackets, who are 5-5-1.

In second place (by virtue of having played fewer divisional games) is Carolina at 7-4-0, including two wins in Washington so far this season.  This will be the clubs’ first contest in Carolina this year.  The Hurricanes, who started December with a 3-1-0 record, have displayed a bit of symmetry in their last four games, losing three of four (two in overtime).  The Hurricanes’ 4-2-2 record for the month has given them a boost, jumping from sixth in the Metro when play started on December 1st to third place as the Caps descend on Raleigh.

Carolina has 24 goals in eight games in December, a tidy 3.00 goals-per-game average.  Eleven players share in the 24 goals, and 18 players have recorded points.  Jeff Skinner, a.k.a. “The Human Tantrum,” has had a fine December to date – eight goals (two game-winners, including one against Washington on December 3rd) and two assists.  The eight goals pushed Skinner’s total to 12 for the season in 23 games, just one off his total for last season in 42 games.  In 18 career games against the Caps, Skinner is 4-10-14, plus-1.

Skinner’s mirror image in December is Eric Staal, who has three goals and seven assists for ten points of his own.  It is part of a longer stretch of games that has him recording points in 14 of his last 16 games (6-13-19) after going only 3-6-9 over his first 18 games of the 2013-2014 season.  If there is an odd number to his season to date it comes in Friday games.  He has more penalty minutes recorded (14) and a worse plus-minus (minus-9) on Friday than he has on any other day of the week.

Here is how the teams compare in their overall numbers.. 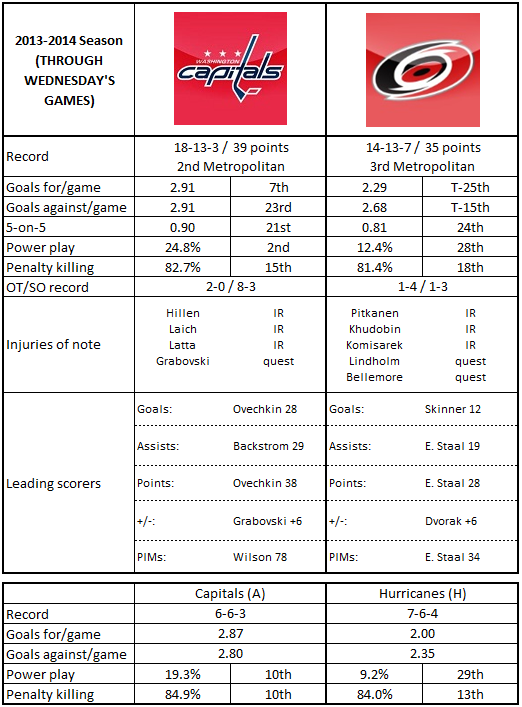 1.  Cooking has not been especially flavorful for the Hurricanes down in Raleigh so far this season.  In 17 home games so far this season Carolina has topped two goals only three times.  They have allowed more than two goals ten times over those 17 games.

2.  Carolina’s power play has been nothing to get excited about this season, and the trend continues in December.  In eight games the ‘Canes are 3-for-27 with the man advantage (11.1 percent).  It is part of a longer slump in which Carolina is 7-for-69 over their last 22 games dating back to November 1st.  Carolina has only 15 power play goals for the season (26th in the league), but two of them came against the Caps on nine opportunities in two games.

4.  The good and the bad.  Carolina is adept at eking out points in one-goal decisions.  In 18 one-goal decisions so far this season they have points in 16 of them (9-2-7).  One of them came against the Caps, a 3-2 win on October 10th.  The Hurricanes have less success in games decided by three of more goals.  In eight such decisions they are only 3-5, but one of their wins came against Washington, a 4-1 win on December 3rd.

5.  Carolina struggles with possession in critical moments of games.  The Hurricanes are ranked 24th in Corsi-for percentage in 5-on-5 cloase situations, 27th in Fenwick-for percentage in those situations.  They have been better lately, though. In eight games in December they are over 50 percent in Corsi-for seven times (including their last six contests), over 50 percent in Fenwick-for in six of them , those being their last six contests.

2.  Washington is the only team in the league to score precisely as much as they allow – 99 goals scored and 99 goals allowed in 34 games.

3.  No team has more wins than the Caps when trailing after two periods.  Not that it is a sure thing; Washington is 5-10-1 in such situations, tied with Chicago (5-5-0) for the league lead in wins.

After missing 12 games to a concussion, Alexander Semin returned to the lineup for Carolina on December 12th against Calgary.  In two games back in the lineup he has yet to register a goal on six shots or a point in just over 42 minutes of total ice time.  He has not had a goal since October 24th (12 games without one).  The Enigmatic One has been more productive in losses (2-3-5) than he has in wins (1-3-4), although the differences are slight.  It indicates he has not been a difference maker, at least so far, although the populations of games are small for making conclusions.  It is quite different from last season in which he recorded 10 of his 13 goals in wins and had a 17.2 percent shooting percentage in wins (3.3 percent in losses).  We would just as soon he have a nice, clean, enigmatic score sheet.  In six games against his former squad, Semin is 2-3-5, minus-3.

Joel Ward is second on the Capitals roster in goals (ten), but he has only one in his last 15 games.  His experience with the Caps in his time here has been better starts than finishes.  Last year he had five goals in his first 12 games, only three in his last 27 games. In 2011-2012 he had four goals in his first 12 games, only two in his last 61 contests.  If he is going to score, tonight might be the time.  Four of his ten goals have come in five Friday contests.  The Caps are 3-1-1 in those games.  In 15 career games against Carolina, Ward is 1-3-4, minus-3.

1.  Backup the Backup.  What do you want to bet Justin Peters gets this start?  In seven career appearances against the Caps he is 4-3-0, 1.67, .938 with two shutouts.  However, he has not faced an exceptionally large workload – 27.1 shots per 60 minutes.  The Caps need to do a better job of applying pressure.

2.  Score first.  Carolina is one of only two teams (Chicago is the other) yet to lose a game in regulation when scoring first.  They just don’t do it much (7-0-2, compared to Chicago’s 19-0-3).  Whisper sweet nothings in their ears, do a dance, pull their pants down.  Do what you have to do to score first.

3. Get under his Skin(ner).  Jeff Skinner is feeling all fat and happy with nine goals in his last nine games. Carolina is 3-1-2 in games in which he scored in that stretch.  Make him unhappy.  Jostle him, bang him, muss his hair.

It’s the last weekend before the holiday, and like anyone else, there are distractions.  Those for the Caps are compounded by the fact that this is the first of a back-to-back set of games (they host New Jersey tomorrow).  This is a club that seems to have had focus issues all season.  It is something to watch for – and beware of – against one of their old time Southeast rivals.