The Peerless Prognosticator is ON THE AIR!!! -- Game 20: Capitals at Red Wings, November 15th

We are LIVE from Motown, where the Washington Capitals will descend on Joe Louis Arena hoping to make their abbreviated one-game road tr-…

“I’m the Spirit of Detroit." 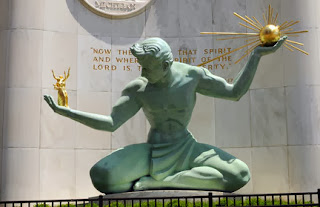 “The Spirit of Detroit.”

“Yeah, in a manner of speaking.”

I’d have thought these days “The Spirit of Detroit” would be hard to find.

“I’m right there, every day, sitting in front of the Municipal Center.”

I mean, with the Tigers losing in the playoffs last month, the Pistons missing the playoffs the last four years, the Lions not having won a playoff game in more than 20 years, and the Red Wings not being what they were…

“Hey, watch what you say about the Red Wings…”

Sorry, didn’t know that was a sensitive subject.

“That’s OK, I just get tired holding up this Sputnik in my left hand here.”

I thought that was meant to symbolize God.

“Yeah, that’s what it says on the Web site…don’t believe it.”

And who is that supposed to be in your right hand?

“I dunno…they’re supposed to symbolize the spirit of family, but if you ask me, they’re Lions fans throwing up their hands at blowing another lead to Green Bay.”

So what are you doing down here at the Joe instead of at the Municipal Center?

“Hey, you think I’m going to miss a chance to see Ovechkin?”

What the Capitals are going to see is a team that might not be what they once were, after all.  Don’t get us wrong, this is a team that has a string of 22 straight appearances in the post-season, a string that includes four Stanley Cup championships and two other trips to the Cup finals.

But there are cracks in the edifice.  Until last season the Red Wings put together 12 straight seasons in which they garnered at least 60 percent of the available standings points.  Until two seasons ago they finished first or second in their division 19 straight years.  However, two years ago the Red Wings finished third in the Central Division (albeit with 102 points), and last year they finished third in the division with a .583 points percentage.

There are teams – a lot of teams – that would give up their concession revenue to have had the record the Red Wings have had over the last couple of decades, even the ever-so-slight slip the last two seasons.  But one can see what might be the end of an era in the Motor City.

It is a team that is getting older.  Of 26 skaters dressing for the Red Wings so far this season, ten are past the age of 30, and the core of the club over much of the last decade – Henrik Zetterberg, Pavel Datsuyk, Johan Franzon, Niklas Kronwall, and Daniel Cleary is 32 or older.  And to that, the Red Wings added Daniel Alfredsson, a lock for the Hockey Hall of Fame from his 17 years in Ottawa, but who is the oldest player on this roster at age 40.

More ominous is the fact that the Red Wings come into this game having lost four games in a row (1-0-3).  By itself, that is not necessarily a big deal.  But it is their second four-game losing streak in the space of 11 games, the other (0-2-2) over the October 19-26 period.  They had two losing streaks of four or more games two seasons ago, but they didn’t experience their second one until game 72 of the season. 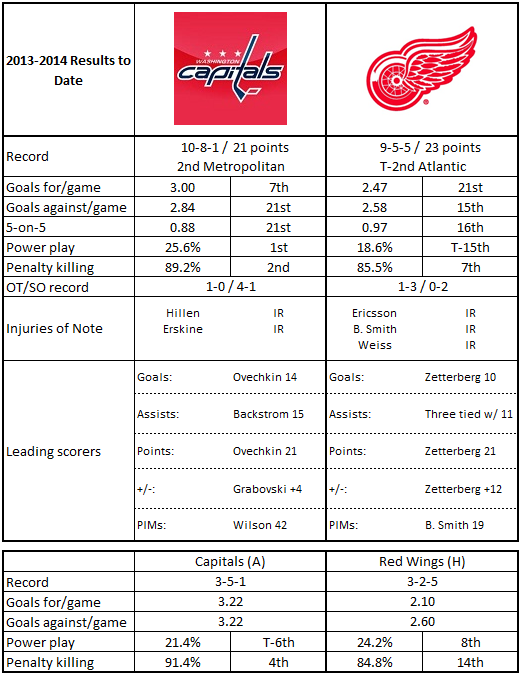 1.  What makes the current four-game losing streak unsettling for Red Wings fans might be the level of competition.  Three of the four losses came to Winnipeg (twice) and Dallas, teams that sit in fifth and sixth place in the Central Division, respectively.  Then there is the matter of Detroit having scored only nine goals in those four games, allowing 13.

3.  Detroit has had a hard time closing teams out. The 19 third period goals allowed is the fourth highest total in the league.  Only three teams have a lower winning percentage after leading at the second intermission, although they have held leads nine times and are 6-1-2.  Still, they are leaving points on the table with third period play.

4.  And here is something of a bizarre statistic.  In 11 one-goal decisions, the Red Wings have yet to lose one in regulation time.  They are 6-0-5.

5.  Detroit does not beat themselves by straying outside the rule book.  Only Chicago and New Jersey have fewer penalty minutes per game than the Red Wings.  That goes hand in glove with the fact that the Blackhawks and the Devils are the only two teams in the league with fewer fighting majors (two apiece) than the Red Wings (three).  And of the three fights recorded by the Wings so far, one of the pugilists – Brendan Smith – injured his shoulder against Edmonton on November 2nd and is on injured reserve.  Another – Jordin Tootoo – has been assigned to Grand Rapids in the AHL after clearing waivers.

3.  Joel Ward is on a three-game goal scoring streak.  It is the longest such streak for Ward since he had a three-game streak March 8-12, 2011 (two of the goals were game-winners) with Nashville.

4.  Nicklas Backstrom has been streaky in the early going.  October 19-24 he had a three-game points streak, followed by consecutive games without a point.  Then he had a four game points streak, followed by a three-game streak without one that he will take to the ice on Friday night.  Backstrom has not had a four-game streak without a point since November 12-19, 2011.

For six straight seasons through 2012-2013, Johan Franzen was a reliable high-20’s/low-30’s goals per 82 games scorer.  So far this season he has two in 14 games.  He scored both in a 4-2 win at Colorado on October 17th; he has not had a goal at home this season, and he does not have an even strength goal.  He has one point in his last six games.  He has been battling an upper body injury, although it is not clear whether he is suffering from injury or illness.  In five career games against the Caps he is 1-0-1, minus-6.

Chesterfield is about 40 miles from Joe Louis Arena, but for Steve Oleksy the journey from one to the other has been much longer.  On Friday he makes his first appearance in Detroit in his NHL career.  He will do so as the third leading point getter among Capitals defensemen, second in assists, second in plus-minus, first in hits, and second lowest in on ice goals against (10 games played minimum), all while getting a shade less than 16 minutes of ice time a night.  He does not yet have a goal this season, and he does not have a point in his last four games.  That is not what he is there for, though.  He is there to cause a ruckus and keep the other guys from getting too comfortable in the offensive end.  The trick for him will be not trying to do too much in his first visit back home.

1.  60 minutes.  Detroit has allowed five third period goals over their four-game winless streak.  It is part of a continuing problem for the Red Wings.  While the Caps have allowed 21 goals in the third period (second highest in the league), Detroit is right there with 19 allowed in 19 games (fourth).

3.  Respect, not awe..  The Red Wings have the winged wheel on the front of the jersey, the arched nameplates on the back, and an octopus handing somewhere from the rafters.  But they have not been playing all that well of late, and it is a team that should not be paid too much respect.  If they worry about who they are, the Caps will find themselves victims of self-inflicted wound.

The Caps have had uneven success in their infrequent visits to Detroit.  Since the 2004-2005 lockout they are 1-2-0 against the Wings at The Joe.  But the Caps have put together a quiet stretch of success with their 5-1-1 record in November.  The aim now is to improve on their road record, which has not been marked by recent success.  This is one of only two road games they will play before Thanksgiving, so the travel burdens should not be difficult to bear.  They catch the Wings in a slump, making this a game they can – and probably should – win.