At what point does “prospect” become “marginal NHL player?”  That’s hard to say, other than the usual “you know it when you see it.”  It might not be that simple in the case of Travis Boyd.  It is not as if Boyd came into professional hockey as a prime, prized prospect.  He was drafted 177th overall (sixth round) by the Washington Capitals in 2011.  He then spent four years in the University of Minnesota program.  He spent two full seasons with the Hershey Bears in the AHL and most of a third before he got his first taste of NHL action – eight games in 2017-2018 (plus one in the postseason).  He skated a career high 53 games in 2018-2019 (plus one in the playoffs) before falling back to 24 games this past season (and another four in the postseason). 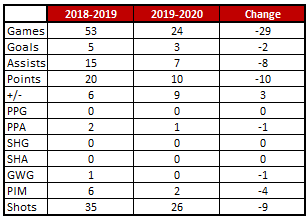 Whether a product of his skill, being merely a good-luck charm, or sunspots, the Caps have been more successful with Boyd in the lineup than without him.  In his three years of NHL experience, the Caps are 58-21-6 (.718 points percentage).  Without him, they are 80-51-17 (.598).  Over his career, the Caps are 23-4-1 when he recorded a point, unbeaten when he posted a goal (8-0-0).  If secondary scoring is a thing, and if it matters (yes, and yes), Boyd has provided a measure of it in his limited exposure to NHL competition.

Odd Boyd Fact… Travis Boyd posted a total of 96 career points at the University of Minnesota.  The same number of career points as Blake Wheeler of the Winnipeg Jets (okay, Wheeler did it in 21 fewer games).

Game to Remember… November 1, 2019.  Travis Boyd had one multi-point game in the 2019-2020 season, and the Buffalo Sabres were the victims.  He posted both points in a four-goal first period for the Caps.  Jakub Vrana opened the scoring just over six minutes into the game.  Less than a minute later, the Caps found themselves dashing into the Sabers’ zone on a four-on-one break.  Brendan Leipsic carried the puck into the offensive zone on the left side, where he then fed the puck across to Boyd skating into the right wing circle.  The puck spent almost no time on his stick, fed back into the middle for Chandler Stephenson, who deked goalie Linus Ullmark to his knees and lifted a backhand into the top of the net.  It would prove to be the game-winning  goal, but Boyd was not finished.  His second assist was a thing of individual beauty.  Taking a pass at center ice in front of the players’ benches, Boyd skated down the right wing.  Upon gaining the zone, he stopped, freezing a Sabre defender, and then skated down the wall.  He carried the puck around the Sabres’ net, and from the goal line extended, he fired a pass to Brendan Leipsic at the bottom of the right wing circle.  Leipsic wasted no time snapping the puck into the back of the net, giving the Caps a 4-0 lead at the first intermission on their way to a 6-1 win.

Game to Forget… November 7, 2019.  When the team wins, everybody wins.  Still, when you are not participating much, that winning feeling might not be as strong.  Boyd skated a team-low ten shifts and 7:24 in ice time, a personal season low.  He did not record a shot attempt, and the only mark on his score sheet line was having taken one faceoff, which he won.  Nevertheless, the Caps pulled out a 5-4 win 17 seconds into overtime on a Tom Wilson goal.

Postseason… Travis Boyd dressed for four postseason games.  He scored a goal in his first appearance, the lone goal in a 3-1 loss to the Philadelphia Flyers in the round robin phase.  It was the only point he posted in the four games he played.

Looking Ahead… Boyd is an arbitration-eligible restricted free agent, coming off a two-year deal that paid him $800,000 a year.  He would not command a high price tag upon re-signing, but a flat salary cap heading into 2020-2021 makes every dollar count.  And, with Boyd turning 27 in September, and having had spotty appearances over three seasons, it is an open question whether the club will think he merits another investment.  Boyd has been productive in limited appearances in Washington, and he is the kind of depth player of value to a team.  However, one has to wonder if his future lies elsewhere, where he can get more, and more regular playing time.

Travis Boyd is one of those players who has performed well at every stop but has difficulty breaking into that last top level.  In 113 games in the USA Hockey National Team Development Program, he was 23-39-62.  In four years with the University of Minnesota, he was 32-64-96 in 148 games.  In 217 games with the Hershey Bears, he was 53-113-166.  Not big time scoring numbers, but evidence of punch.  But whether his skill set is not quite enough, or he is the victim of numbers at forward with a strong Caps team, he has not been able to break through to claim a regular spot in the lineup.  As he turns 27, where he should be entering the prime years of his career, is time for the restricted free agent running out with this club?  As the saying goes, time will tell.

Photo: Lachlan Cunningham/Getty Images North America
Posted by The Peerless at 8:00 AM No comments: