The Peerless Prognosticator is ON THE AIR!!! -- Caps vs. Bruins, January 27th

We’re back to start the second half of the season, figuratively speaking, and it gets off with a bang as the Capitals head to Beantown to take on the Boston Bruins.

“It’s a little known fact that the term ‘Beantown’ comes from the fact that back in the Revolutionary War, there were more people in Boston than in any other town in the Colonies, so ‘people’… ’human beings’… ’beans’… ’Beantown.’” 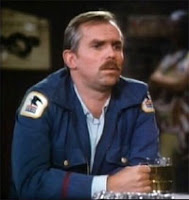 Cliff Claven…it’s been awhile since we saw you… and by the way, isn’t Boston called “Beantown” because back in the early days, a lot of folks in Boston baked beans soaked in molasses?

As you folks might say up here, “wicked good.”

“Hey, you hear the one about the fella who died, went to the pearly gates? St. Peter let him in. Sees a guy in a suit making a closing argument. Says, "Who's that?" St. Peter says, "Oh, that's God. Thinks he's Denny Crane."

So, counselor, what do you think of the Bruins chances this year? 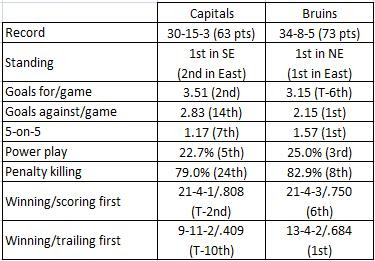 Very impressive, to say the least.

“Denny Crane is nothing if not impressive.”

Yeah, and the last time the Bruins gave up ten goals in a game was against the Caps – a 10-2 loss last March 3rd.

“Ah, but did you know that the last time an opponent had a four-goal game against the Bruins was back in 1999?”

Uh, guys…this is all well and good, but could we move it along?

Are you sure that’s a good idea?

“Well ya see, Peerless, it's like this. A herd of buffalo can only move as fast as the slowest buffalo. And when the herd is hunted, it is the slowest and weakest ones at the back that are killed first. This natural selection is good for the herd as a whole, because the general speed and health of the whole group keeps improving by the regular killing of the weakest members. In much the same way, the human brain can only operate as fast as the slowest brain cells. Excessive intake of alcohol, as we know, kills brain cells. But naturally, it attacks the slowest and weakest brain cells first. In this way, regular consumption of beer eliminates the weaker brain cells, making the brain a faster and more efficient machine. That's why you always feel smarter after a few beers.”

“You should have been a lawyer, Cliff…”

“What, and give up the U.S. Postal Service?”

Well, while these two debate the medicinal benefits of beer, there is a game to be played. And the Caps take a 2-0 season series record into their first visit to Boston this year. It seems like just yesterday that these teams went at it. In fact, it was just ten days ago, so there really isn’t much to update in terms of what to look for from the Bruins from what we wrote on that gameday. But now the contest moves to Boston, where the Caps haven’t won a game in regulation since defeating the Bruins, 2-0, on December 2, 2000. Since then Washington is 1-6-3, plus two ties (they won an overtime 2-1 decision on April 10, 2006).

The Bruins come out of the All-Star break holding a ten-point advantage over the Caps and a game in hand. But perhaps the one thing to note about the Bruins is that they had something of a bad finish – in the context of their season overall – to the pre-All-Star Game portion of the season. The Bruins lost to Washington (a 2-1 decision on January 17th), then dropped a 5-4 Gimmick decision at home to the decimated St. Louis Blues two nights later. The Bruins finished up before the break with a 4-3 Gimmick win at Toronto. What that means is that since beating Pittsburgh on New Years Day, 4-1, Boston is a somewhat mortal 5-3-1 in January.

One wonders what’s up with Boston’s goaltending as the second half starts. Tim Thomas is the number one netminder, but the Bruins have recalled Tuukka Rask on an “emergency” basis. The word in Boston is that backup goaltender Manny Fernandez has “general soreness,” perhaps related to back issues he had earlier in the season. Of course, at this time of year, any roster change, especially when accompanied by the usual cryptic description of injury, gets the rumor juices flowing with respect to a possible trade.

Then there is the matter of Thomas. We thought Thomas should have been the All-Star Game MVP for his shutting the door on the Western Conference stars, holding them to one goal in the last 17:28 of regulation play and five minutes of overtime, then denying both attempts in the Gimmick portion of the show. But going into the break, Thomas allowed seven goals on 65 shots in his last two games. He took the ice in the last six games played by the Bruins going into the break (4-1-1, 1.95, .940). Given that he’s shouldered the load lately and spent the weekend in the All-Star hoopla, one wonders if Rask will get the start.

With Phil Kessel likely to be out for this one, Ryder will be the Bruins’ leading goal-scorer taking the ice (18). He had a nice little run going earlier in the month, going 3-2-5 in wins over Ottawa, Carolina, and Montreal. It is probably no coincidence that in those games the Bruins scored 14 of the 30 goals they’ve scored in ten games in January. Ryder has had success against the Caps in the past, especially on the power play – a consideration given the Caps’ unremarkable penalty killing. Ryder is 9-6-15, plus-2, in 17 career games against the Caps (five of the goals coming on the power play).

Nylander is currently 18th on the team in average ice time – 14:34 – a number that is about four and a half minutes lower than last year’s injury-abbreviated season and almost six minutes fewer than his last year with the Rangers. His 6.7 percent shooting percentage (four goals on 60 shots) is the worst of his career for seasons in which he’s played at least 20 games. We’re in the window of the calendar where a lot of discussion is going to focus on trades, and Nylander’s name will be mentioned often. He’s had a measure of success against Boston – 14-18-32, plus-18 in 36 career games. The Caps aren’t in a position to “showcase” a player the way a team falling out of contention might, but how he performs over the next month will determine interest and return. Having a good game against Boston would be a good place to start. Who knows, it could be the start of his playing himself back into major minutes on the team.

With 34 games left to play and ten points to make up, it seems unlikely that the Caps can catch Boston for the top spot in the Eastern Conference. But if they’re going to do it, they have to beat the Bruins in what amounts to a four-point game. The Caps are 9-3-1 against Northeast teams this year, 2-0 against Boston. We think it will go to 10-3-1 and 3-0…

In 1950, Miles Davis released “Birth of the Cool,” perhaps the breakthrough work in the history of contemporary jazz.

This past weekend, the National Hockey League might finally have had its “Birth of the Cool” moment. We are not generally a fan of the all-star format, but there was one player who transcended the event. The combination of his skill, personality, quirky telegenic quality, flair for dramatic timing, and shrewd ability to connect with media combined to make Alex Ovechkin the very definition of “cool.”

It’s something Washington Capitals fans – and hockey fans in general – have suspected for some time. But this weekend he had a larger stage on which to perform, and perform is just what he did. Alex Kovalev won the MVP award, Evgeni Malkin had arguably the signature goal of the game. But sports fans got the full Ovechkin for the weekend – making himself available for every interview possible, dominating the skills competition portion of the weekend with his enlistment of props and a formerly hated rival, netting a goal and a pair of assists in the game itself, scoring the clincher in the shootout competition to determine the winner of the All-Star Game. Ovechkin is what fans will remember.

It is almost cliché at this point to remark that perhaps no athlete on the planet looks like they’re having as much fun doing what they do than Ovechkin. But more than that, he serves as the ultimate example of being comfortable living in the skin of the supremely talented athlete. This might be the biggest difference between Ovechkin and his chief competitor for “best hockey player on earth,” Sidney Crosby. Crosby, who has been touted as the greatest player since Gretzky since childhood, seems to have slipped – through no fault of his own – into a sort of athletic “nerdishness” as counterpoint to Ovechkin’s “cool.” Where Ovechkin seems to be having a blast just being “Ovechkin,” Crosby almost looks uncomfortable being “Crosby” at times, as if the suit doesn’t quite fit right. Crosby’s absence from the on-ice portion of the weekend’s festivities also conspired to permit Ovechkin to crash through the window of opportunity presented by having the stage more or less to himself in this player-versus-player competition.

And, as if channeling the music in the Davis album – one noted for the brevity of the individual pieces – Ovechkin works his magic in the short 60-second bursts of his shifts on ice or in the interviews that accompany his visits to rinks across North America. In a way, every game is an album comprised of the individual pieces of his memorable, bring-the-fans-out-of-their-seats shifts.

An opportunity has been presented to the National Hockey League. There is a web site – The Science of the Time/The Science of Cool. Its director, Carl Rohde, defines “cool” as “nothing that's painfully hip…Cool for us is that something must be attractive and inspiring, with future growth potential." What exemplifies that definition of “cool” more than Alex Ovechkin?