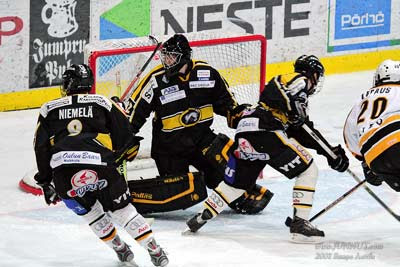 In the National Football League, he is called, Mr. Irrelevant. He is the last player taken in the draft. On the rare occasion, Mr. Irrelevant has his place in the sun. Marty Moore (New England Patriots) and Jim Finn (New York Giants) have played in a Super Bowl.
In the NHL, the odds are long on the last pick taken to make it in the show. Since the entry draft was established in 1979, only eight players taken last have played in an NHL game, and only three of them have played in more than 100 NHL games (Kim Johnsson leading the pack with 679 NHL games played). Paul Maurice, taken last in 1985, did not make it as a player, but he's had a productive career as an NHL bench boss.
This year, it is Petteri Simila, a goaltender from Karpat-Jr. out of the Finnish junior league, taken by Montreal. Like a lot of goalies taken in this draft (six of them are 6'4" or taller), he's got some size -- 6'6", 189. He'll need to have the sturdiness such size suggests, because he's looking up at everyone else. Good luck to him and to all the draftees.
Posted by The Peerless at 1:56 PM No comments: 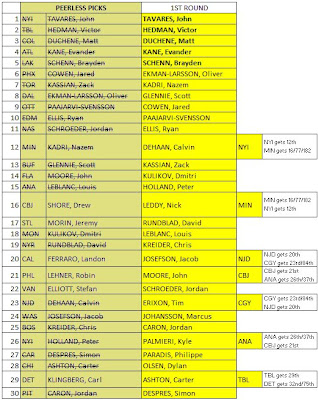 After that, not so good. But we did have 25 of our 30 picks actually taken by someone in the first round. We suspect that's a pretty good batting average.

Posted by The Peerless at 10:07 AM No comments:

Well, It’s the day after Christmas for draft geeks, and it’s time to survey the damage as the suits proceed to the second round. What happened?

We were not surprised that when the suspected Dany Heatley and Phil Kessel deals failed to materialize, the media in attendance jumped on the oldie-but-goodie, “Chris Pronger to somewhere (in this case, Philly)” possibility. The trade that was consummated will be hailed as a “blockbuster,” we suppose (actually, a "mega deal" in Montreal). It’s not, although it does address needs for both teams. In that respect, it could be “win-win”… to a point. Pronger fills an immediate need (although the way a Jay Bouwmeester deal might have…now that would have been a blockbuster), but not the need for the Flyers. That would be an NHL goaltender, seeing as how Martin Biron and Antero Niittymaki are free agents (and probably not the goaltending the Flyers would need to be a Cup contender anyway). Anaheim jettisons a big contract and gets younger.

Gary Bettman came to the podium and stood as a long introduction in French was given. Rough translation…”Welcome, hockey fans. Behind me is the Commissioner – feel free to boo (they boo). Yes, yes, boo your lungs out. And you, Mr. Commissioner… on behalf of all hockey fans, let me just say… you suck! (crowd erupts in applause, Bettman beams, not having a clue).” Upon which, the Commissioner, in perfect unaccented French oozes to the podium and says, “Muhr-see bow-coo…bone swahr.” I felt as if I was at a Truffaut film festival.

And then there was Bettman at the podium flanked by Henri Richard and Yvon Cournoyer. You remember the end of the movie Caddyshack? When Al Czervik is flanked by his henchmen? I half expected Bettman to say, “Moose, Rooco…help the judge find his checkbook.” But seriously, Richard looked as if he still could play (or at least was looking for someone to check), while Cournoyer looked sort of like the great character actor Cecil Kellaway...

Then it was time for the show… Garth Snow, his face a mask of emotionless plaster slow walked to the podium, giving nary a hint of who he would pick – John Tavares? Victor Hedman? Matt Duchene? Charles Wang? Then scout Mario Saraceno provided the required French introduction and noted that 10,000 fans were at Nassau Colisseum…no doubt the biggest crowd of the year there. And the winner of three fun filled years as a New York Islander is (drum roll please)….

As the arena welcomed the latest player of the century to the podium, we were left to wonder… was Garth Snow wearing inflated shoulder pads under his suit coat?

After that, the needle on the suspense meter fell precipitously, despite the intrepid efforts of the folks doing the pick-by-pick play-by-play on television. There’s a trade! Wooooo! Pronger to Philly! It’s official! President Obama will comment on the deal at nine o’clock! But we were wondering about something else…

What was up with the buckets on the team tables stuffed with Frito-Lay products? Why not just have buckets of peanuts and have the team personnel hurl the shells to the floor? Or maybe have Brian Burke and Bryan Murray hurl them at each other.

The rest of the evening had a rather dull patina of sameness to it… make a pick, wait for the hugs, follow the victim – uh, draft pick – to the podium, get the handshake (why was Bettman saying, “great job” to all the picks? Congratulating them on not tripping on their way to the stage?), put on the jersey and hat, pose for pics…NEXT!

Versus could have shown a documentary on putting side view mirrors on Ford’s at the assembly plant.

We’ll have more to say about the Caps’ pick/picks later, but we do want to ask… did someone kill George McPhee’s goldfish just before he went to the stage? I don’t know if I’ve ever seen an angrier looking McPhee. Maybe he had a deal that went south at the last moment, but that was not a happy camper stomping to the stage. The pick – Marcus Johansson – seemed an afterthought, and it broke the land speed record for shortest time spent on stage making a pick. No French intro, no thanking the Canadiens and their fans, no – ugh – congratulations to the – ugh – Stanley Cup champion Penguins. Just, “the Capitals pick Marcus Johansson, now let me get the hell outta here.”

As these things go, it wasn’t bad. It was rather quaint, in fact. None of the over-the-top production that is the NFL draft with Breathless Berman and Kinetic Kiper. None of the Roman Coliseum look of Emperor Stern and the NBA draft (cue the trumpets!). None of the strutting and preening among the draftees that those drafts seem to have developed. Just a bunch of well-scrubbed kids and their folks thrilled to be there and a gaggle of suits standing on the stage with jerseys and hats, scared out of their wits that they’ve just placed their livelihoods at the mercy of a bunch of 18-year olds.
Posted by The Peerless at 9:44 AM 2 comments: