“If you think it's expensive to hire a professional to do the job, wait until you hire an amateur.”
-- Red Adair

After the Washington Capitals were eliminated from the postseason in May 2015, general manager Brian MacLellan looked at his situation at right wing, and you had the feeling that he was not excited about his in-house options in the short term:

“[A right winger is] on the shopping list.  I think it’d be a priority for us if we could find a guy who could play there. I don’t know if the UFA market’s going to provide that for us. We’ll see what happens in the trade market here coming up, see if we can find that. Otherwise we’re going to have to develop a guy.”

As it turned out, there was a newly minted free agent right wing who just wrapped up his seventh season with the Los Angeles Kings, two of them ending in Stanley Cup victories to add to the one he won in Carolina with the Hurricanes in 2006.  And when the unrestricted free agent signing period opened on July 1st, the Capitals signed him – Justin Williams had a two-year, $6.5 million contract.

In Williams, the Capitals now had an almost legendary performer in precisely the situations that had so confounded and disappointed Capitals Nation for decades – coming through in the clutch in Game 7’s of a postseason series.  What better tonic could there be for a franchise eliminated in Game 7’s in each of their three most recent playoff appearances and in six of their last seven trips to the postseason than a player whose teams had a 7-0 record in Game 7’s in which he appeared, who had seven goals in those seven games (tied for most in league history with Glenn Anderson), and whose 14 points in Game 7’s was best in league history?

Williams improved in just about every major statistical category from his final year in Los Angeles.  He improved by four in goal scoring, by seven in assists, 11 in points, seven points in plus-minus, and he recorded 27 more shots on goal this season than he did last year with the Kings.  Only in power play scoring did his numbers drop (down one goal and three assists from last season), a product of the fact that he averaged a minute less per game than T.J. Oshie, who played the same position in the Caps’ power play scheme. 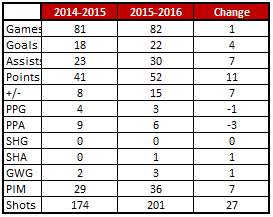 Cheerless’ Take… Those ten game splits have another thing about them that doesn’t look so good.  Look at the last four…11 points, seven points, six, four.  And the plus-minus… plus-8, plus-4, minus-1, minus-5.  That’s not exactly the direction you want to see those numbers go as time passes by.  Points and plus-minus is influenced by teammates to a degree, but still.  Not good.

Odd Willams Fact… Justin Williams scored more than a quarter of his goals this season against the New York Rangers (six), and that number increased his number of goals scored against the Rangers by 67 percent over the total he recorded in the first 28 games he played against the Blueshirts over his career coming into this season (nine).  If only he had been a Capital last season.

Going into their December 8th contest with the Detroit Red Wings, the Caps sat in second place in the Metropolitan Division, one point behind the New York Rangers.  It was a bit early in the season to think it an urgent matter to put the Rangers in the rear-view mirrors, but it’s never a bad thing to jump ahead of a rival in the standings, either.  And the Caps got off to a good start on that objective in their contest against the Red Wings.  Less than a minute into the game, Marcus Johansson managed to keep a sliding puck in the offensive zone and fed it to Evgeny Kuznetsov coming down the right side.  Kuznetsov worked his way in deep and tried to stuff the puck past goalie Jimmy Howard, but it ended up off on Howard’s right.  Justin Williams was in perfect position, even if on his knees, to poke the puck past Howard’s right pad and under his stick to give the Caps the early lead just 43 seconds into the contest.  For Williams it was his 600th NHL point, one of 37 active players to have reached that milestone.  And, with the win, the Capitals took over the Metropolitan Division lead from the New York Rangers, a lead they would not relinquish for the remainder of the season.

Although Justin Williams had not worn a Carolina Hurricanes uniform since 2009, any time a player faces a former team, his juices get flowing a bit faster.  On New Year’s Eve, the Caps took a nine-game winning streak to Raleigh to face the Hurricanes.  The teams fought to a scoreless tie in the first period, and the teams exchanged goals in the second period.  The Hurricanes broke on top, though, with a pair of goals just over four minutes apart to start the third period.  The Caps got one back courtesy of Alex Ovechkin, but it was as close as the Caps could get, Andrej Nestrasil adding an empty net goal in a 4-2 Carolina win to snap the Caps’ winning streak.  Williams, who had three goals and three assists in the nine-game winning streak, was held without a point and did not have a shot on goal in 12:51 of playing time.  It was his second lowest ice time total for the season.  His lowest – 12:43 on October 17th in Game 4 of the season – also came against Carolina.

So what happened in the playoffs?  His Corsi-for of 49.7 percent was his second worst in seven postseason appearances, and his minus-3.1 Corsi-for/Relative was the worst of his career, the only time he finished in minus territory.  And as it was for many Capitals forwards, it was like looking at two different players or seasons.  Against the Philadelphia Flyers in the first round, his Corsi-for at 5-on-5 was 57.3 percent, although even there the signs were ominous.  His Corsi-for/Relative was in plus territory in Games 1-3, but he was underwater in each of Games 4-6.  In the second round against the Pittsburgh Penguins, his overall number plunged to 43.1 percent, and he was in minus territory on his Corsi-for/Relative in four of the six games.

Justin Williams provided a stable, reliable presence on the right wing in the regular season, part of the effort on the part of general manager Brian MacLellan to ensure precisely that in his off-season personnel moves.  But there was an additional aspect of his game that the Caps sorely needed – his ability to step up in big games, to provide the kind of performance the Caps needed to get over the hump of early playoff round losses.

If you look at Williams’ postseason resume overall, it is good, but not especially impressive.  Since the 2004-2005 lockout he is tied for 26th in postseason games played (110), 14th in goals scored (32), tied for 16th in assists (47), tied for 17th in points, tied for 15th in game-winning goals.  In that scoring sense, he over-performed relative to the number of games he played.  But it was that ability to perform when the stakes were highest – Game 7’s – that was to be the remedy for the Caps’ playoff ills.  Unfortunately, the Caps failed to reach a Game 7 in the second round against the Pittsburgh Penguins, losing that matchup in six games.  We will have to wait another year to see if the legend lives on, and the Caps can rid themselves of their postseason curse.