The Peerless Prognosticator is ON THE AIR!!! -- Game 29: Capitals at Blue Jackets, December 8th

The Washington Capitals wrap up their three-game road trip on Saturday night with a visit to Columbus, Ohio.  Columbus… “Cowtown”… “The Discovery City”… home of THE Ohio State University (as if there are any impostors).  And also home of the Columbus Blue Jackets, who are fast on the heels of the Caps in the race to win the Metropolitan Division this season.  Washington enters the contest with 35 standings points, one ahead of the Jackets, who have one more win in regulation and overtime (16) than do the Caps (15).  Both teams have played 28 games.

These teams do seem welded at the hip in other respects, too.  For instance, both teams broke two-game losing streaks on Thursday night with wins on the road. The Caps beat the Arizona Coyotes, 4-2, while Columbus knocked off the Philadelphia Flyers, 4-3, in overtime.  Both clubs avoided suffering a third straight loss for the first time this season.

There is something else these two teams share that is a bit surprising, a bottom-third-in-the-league scoring defense.  Washington is 21st in the league through Thursday’s games (3.18 goals allowed per game), while the Blue Jackets are 25th at 3.36 goals allowed per game.  That ranking and number start with goaltending, and that focuses attention on Sergei Bobrovsky.  It has not been one of the nine-year veteran’s best seasons.  His 3.04 goals against average in 20 appearances is his career worst to date, topping the 3.02 mark he had with Philadelphia in 29 appearances in 2011-2012, his second season in the league.  His .901 save percentage is not his worst to date, but he can see the bottom of the well from where he is (.899 in that same 2011-2012 season).

Bobrovsky is without a shutout this season, and while it is still early, he has never finished any of his previous six seasons in Columbus without one.  He has been relentlessly streaky this season.  After alternating losses and wins in his first four appearances, he went on a three-game losing streak, which became four losses in five games, then had a four-game winning streak, a loss, and then another three-game winning streak.  He followed that with a two-game losing streak, the second of which might have been the most ghastly performance by a goalie this season – eight goals allowed on 26 shots in 46 minutes of a 9-6 loss to the Calgary Flames last Tuesday.  He did beat the Flyers in the overtime win on Thursday, so there might be another streak in the offing that would not be good news for Caps fans.  On the other hand, he has a save percentage of .848 over his last five games.  Bobrovsky is 8-10-4, 2.93, .904 in 23 career games against Washington.

Cam Atkinson is among the hotter goal scorers in the league these days.  He has 13 goals in his last dozen games since November 10th, tied with Winnipeg’s Patrik Laine over that span for most in the league.  He scored goals in nine of those 13 games and has a pair of hat tricks to show for it as well, one in a 4-1 win over the Hurricanes in Carolina on November 17th, the other in the 9-6 loss to Calgary last Tuesday.  Atkinson, with 19 goals this season, is already within five of the total he had last year (24) and is more than half way to his career high (35) set two years ago.  His next goal will give him 20, his sixth straight season with 20 or more goals.  He would join Alex Ovechkin as the only players to have done six times in six seasons, although there are a number of players who are likely to reach that mark later this season.  Watch Atkinson’s ice time.  In six games this season when he skated more than 20 minutes, Columbus is 1-3-2.  He is 9-7-16, plus-3, in 22 career games against the Capitals.

Columbus spreads their blue line scoring around.  Every one of the six defensemen to dress for more than ten games this season has a goal.  At the top of that list are Seth Jones and Zach Werenski with five apiece.  Each of them also have 11 assists and 16 points.  But whereas Jones has two game-winning goals, one of those in overtime, and is a plus-3 this season, Werenski has no game-winners and is a minus-7.  Werenski has been a trigger man on the Blue Jackets’ power play, his seven assists on the man advantage more than double the total of the other eight defensemen to dress this season (three).  He also has the only power play goal scored by a Columbus defenseman this season.  However, he has been on the ice for 41 of the 94 goals scored against Columbus this season, far more than any other defenseman (Ryan Murray: 34).  He’s had a particularly tough time of late, going minus-5 over his last three games, although he did record his 100th career point in the 9-6 loss to Calgary.  Werenski is 2-2-4, even, in 10 career games against the Caps. 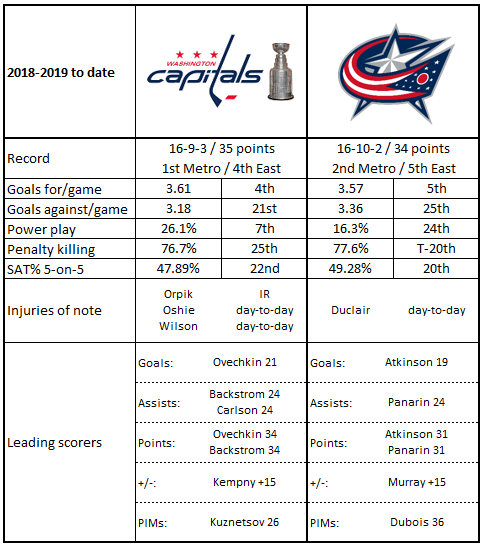 1.  Columbus is one of three teams this season to score seven or more goals in three games (Calgary and Tampa Bay are the others).  They did it in a 7-4 win St. Louis on October 25th, in a 7-3 win over Florida on November 15th, and in a 7-5 win at Detroit on November 26th.  They also happen to be the only team in the league to have allowed eight or more goals more than once, losing an 8-2 decision at Tampa on October 13th and dropping that 9-6 decision to Calgary on December 4th.

5.  The Blue Jackets do a good job of playing within the rules.  They have been charged with 96 penalties this season.  Only three teams have been hit with fewer penalties: Carolina (92), Pittsburgh (91), and Toronto (77).

1.  Of the 23 Columbus goaltenders to have dressed against Washington in the all-time series, only one of them ever pitched a shutout against the Caps.  Steve Mason did it twice, both times by 3-0 scores, a 26-save effort on November 29, 2009 and a 45-save blanking on January 9, 2009.

2.  Washington is 4-1-2 in their last seven visits to Columbus in the regular season (7-1-2 counting playoffs), but that loss in regulation was in their most recent regular season trip to Ohio, a 5-1 loss last February 26th.

3.  If John Carlson gets one point in this game, he will tie Adam Oates for 18th place in points in Caps history.  Carlson has 362 points.

4.  Only Colorado has lost fewer games in regulation when trailing after two periods (two) than the Caps (three).  Then again the Caps have won only one such game.  The seven games they trailed after 40 minutes is second-fewest in the league (Dallas: 6).

5.  Washington has more wins when outshot by opponent (10) than they have total games outshooting opponents (nine).

With seven goals in 27 games, Artemi Panarin is on a pace for 21 goals this season.  That would be the lowest goal total of his four-year career (he had 27 with Columbus last season).  But don’t get the idea that Panarin is slumping.  He’s more moving things around.  He has 24 assists to go with those seven goals, almost half way to his career high (55 last season), and his 31 points put him on a pace to finish with a career-high 93 points.

The odd part of his production so far is that so little of it has come on power plays.  Last season he was 7-14-21 on power plays in 82 games.  So far this season, he is 1-4-5 despite leading the team in power play ice time per game (3:12).  He goes into this game with two assist in each of his last two games and three of his last five contests.  He would appear to be the straw that stirs the drink for the Blue Jackets, Columbus is 6-0-0 in games in which Panarin has goals this season, 13-2-1 in games in which he recorded a point.  On the other hand, the Blue Jackets are 2-8-1 when Panarin failed to record a point and 9-10-2 when he did not score a goal.  He is 3-4-7, plus-3, in nine career games against Washington.

One could reasonably say that when the Caps signed center Nic Dowd to a one-year/$650,000 contract on July 1st, it was to replace the outgoing Jay Beagle, who would sign a four-year/$12 million deal with the Vancouver Canucks.  The Caps got a player of similar size, the same right-handed shot, only cheaper and more than four years younger.  But while Beagle grew into a substantial contributor for being largely a fourth line player (38 goals in 279 games over his last four seasons in Washington), Dowd’s numbers were quite a bit more modest.  In two full NHL seasons split between the Los Angeles Kings and Vancouver, he had just nine goals in 126 games.

Dowd opened the season with promise, though, scoring a goal on Opening Night.  Then again, who didn’t?  The Caps ran up a 7-0 win over the Boston Bruins on banner-raising night.  Dowd followed that up by going without a goal in his next 16 games with only one assist on his ledger.  Dowd got an assist in the Caps’ 3-1 win over the Detroit Red Wings on November 23rd, though, and it started him off on a nice run of late.  Over his last seven games, starting with that win against Detroit, Dowd is 3-2-5, plus-3, despite averaging only 10:32 in ice time per game.  With four goals in 24 games overall, he seems a decent bet to push past his career high in goals – six in 70 games with Los Angeles in 2016-2017.  He will be facing Columbus for the fourth time in his career and will be looking for his first point.

It is perhaps a bit early for a “statement” game, but both teams might be looking to send a message.  For the Caps, who lost the first game of this season's series, 2-1, in Washington on November 9th, this is where the Stanley Cup journey began in earnest last spring after dropping the first two games of their opening round series against the Blue Jackets in Washington.  But for Lars Eller’s game-winning goal in the second overtime of Game 3 that set everything to come after in motion, this would be probably just another mid-December game on the schedule.  They want to remind Columbus of their place in the pecking order of things.

For Columbus, the message is a bit more complex.  They have had to deal with the despair that comes from the knowledge that they had that opening series on their racket with two wins and then two games to play on the ice sheet these teams will occupy on Saturday night.  It is a new season, and these teams have already met once, but memories linger.  In the here and now, Columbus might want to send a message that they deserve to hang with the champions on the merits of their talent and will, that being a point behind the Caps is no fluke, despite the lack of marquee names on the roster.

This contest that pits two very similar teams in terms of recent history makes this a rivalry that is becoming one of the more interesting divisional rivalries between cities that one would not necessarily associate with such things.  But hey, it’s hockey.