Now that we’re down to the 300…oops, the 23…we can look at the next installment of the preview…

"What's in a name? That which we call a rose by any other name would smell as sweet."
-- Romeo and Juliet (II, ii)

That is the benchmark that might apply to Brent Johnson this season. If he contributes at least a .500 record, a sub-3.00 GAA and a .900-plus save percentage, the Caps will have strong support toward snaring one of those eight playoff spots.

All games count, and being the “backup” goaltender is a distinction without a difference when it comes to the standings. When he’s in there, he’s got to provide quality performances. He’s had a good preseason, and he has considerable experience, so there is the legitimate potential that Johnson’s year would be sweet, regardless of what one calls him.


"The quality of mercy is not strain'd. It droppeth as the gentle rain from heaven upon the place beneath. It is twice blest: It blesseth him that gives and him that takes."
-- Merchant of (IV, i)

Caps fans hope that the tender mercies applied by defenseman John Erskine droppeth like a torrent. If the Caps and their fans have a wish, it would be that they blesseth him that gives, and God help him that takes.Erskine was a surprisingly effective defensemen up to a December 16 game against when he fractured a foot blocking a shot. Coincidentally, perhaps, that game represented the high-water mark of the year for the Caps. Erskine came back to play 11 more games, at which time he missed the last 14 games with a thumb injury. It wasn’t the most fulfilling year.But Erskine’s presence on the roster in 2007-2008, even if he does not dress every night, provides something the Caps do not have elsewhere on the roster – a truly physical defenseman who can intimidate opponents. Although the Caps will likely see the shots against cut by virtue of the puck-possession strategy they have the talent to play, an ability to keep the crease free of the trash can help in that statistic, too, making life easier for Olaf Kolzig and Brent Johnson.

"How poor are they that have not patience!”

David Steckel has been nothing if not patient. Drafted at the end of the first round in 2001 by , he completed four years at , then worked his way up from of the ECHL to of the AHL. He became a free agent and hooked on with in 2005. Spending most of his time in Hershey the next two seasons (with 11 games in DC mixed in), he became quite a force as a defensive specialist and then had his goal-scoring game come around with 30 last year.

In camp, he played himself onto a roster spot, the culmination of hard work and patience enough to learn his craft. He projects as a checking forward with faceoff skills and a good work ethic (amply demonstrated), but that 30-goal year in Hershey suggests maybe he can contribute the occasional offense as well. His frame doesn’t necessarily project well into the new NHL, where smaller, shiftier forwards can make like difficult for bigger men (Steckel is 6’5, 215), but his effort can go a long way to compensate for that. In a way, Steckel is a throwback to a time when “plumbers” meant more than guys with wrenches and butt-cracks (my apologies to plumbers…we couldn’t resist). Having been patient enough to work his way up the rungs of the organizational ladder, one would have to bet on Steckel….uh, sticking.

“The dragon wing of night o’erspreads the earth.”

Matt Bradley plays with a certain ferocity that fills the ice. He might not be the most gifted player in terms of skill, but Bradley can make his presence felt in other ways that can contribute to the Caps’ success. He is pretty much the skating embodiment of the term, “energy forward.” He will hit, check, agitate, or fight (if necessary) to make the most of his minutes. Playing with an edge is one of those rough corners that the NHL seems intent on sanding down. Well, Bradley is more sandpaper than something to be sanded.The numbers and higher talent level put him in a numbers crunch, but his surviving the last roster decisions is a reflection of his survivability and tenacity. The Caps don’t have a lot of forwards who can bring that every night – at least so as to make opponents uncomfortable. He’s never had ten goals, has had only once had a 20-plus point season. But he was second on the team last year with 120 hits while getting less than 12 minutes a game (and surprisingly few PIMS – he was ninth on the club with 47 in 57 games).

Don’t skate with your head down…the dragon wing of night might be waiting.

Brooks Laich has been all over the score sheet in terms of position. He’s been anywhere from the second to the fourth line, and he’s been at center and on the wing. So what is it? Resemblance aside (and really, it’s kind of creepy), Laich might be a “Chris Clark” in waiting. Not exactly heralded as a youngster (a 193rd overall pick by in 2001), he then had to suffer as the question – “who is Brooks Laich?” – to this Caps-ardy answer, “he was who the Caps got in return for all-time club leading goal scorer, Peter Bondra.” Yeah, the Caps also got a second round pick in that deal, but you get the point…”hey, no pressure, kid.”

Laich has put up workman-like 7-14-21 and 8-10-18 results in his two years in , and that brings up another point. He’s still another guy who seems to have been here when Brooks Robinson was still in . He has 151 games of NHL experience and is only 24 years old (last June). The Caps might not yet know what they have here – Chris Clark didn’t blossom into anything resembling a scorer until he was 29 (although Laich isn’t likely to find himself on a line with Alexander Ovechkin often). While Laich is likely to find himself with fourth, or perhaps some third line minutes, he might need some time for him – and the club – to find out what he may be.

So…Ben Clymer was sent to Hershey. And…with Eric Fehr likely to go on injured reserve and Jakub Klepis likely to go, the Caps are down to 14 forwards. And eight defensemen. And two goalies. That’s 24. One person yet to be left standing in the game of musical roster spots.

Why does The Peerless think, “trade?”

And why does The Peerless think Clymer really wasn’t 100 percent back from last year’s injuries? This is an unfortunate cut. Clymer came here as a Stanley Cup winner (with Tampa Bay in 2004) and did any job asked of him, including returning to the blue line where, despite being injured, sucked it up and applied himself to his job. He even found himself in the role of fashion model.... 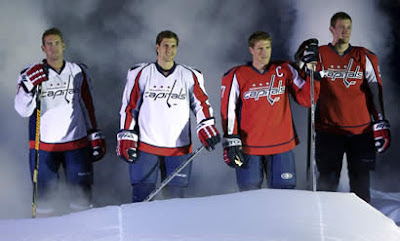 He’s the kind of pro you usually find on successful clubs, and if he can help Hershey, that will help the kids down there. If he is recalled, he seems likely to be lost to the club, the half-price provision on re-entry waivers making him something of a bargain.

Sometimes, there are men who come and go in the midst of what a team like the Caps are doing to rebuild. They end up being an “oh, yeah…I remember him” years down the road. But Clymer’s a real pro, and that kind of thing deserves respect. Whether it’s here, in Hershey, or another NHL stop, good luck to him.
Posted by The Peerless at 6:14 AM 2 comments: